For other people with the same name, see William Jones.

Sir William Jones (28 September 1746 – 27 April 1794) was an Anglo-Welsh philologist, a puisne judge on the Supreme Court of Judicature at Fort William in Bengal, and a scholar of ancient India, particularly known for his proposition of the existence of a relationship among European and Indian languages, which would later be known as Indo-European languages. He, along with Henry Thomas Colebrooke and Nathaniel Halhed, founded the Asiatic Society of Bengal in 1784, and started a journal called Asiatick Researches.

William Jones was born in London at Beaufort Buildings, Westminster; his father William Jones (1675–1749) was a mathematician from Anglesey in Wales, noted for introducing the use of the symbol π. The young William Jones was a linguistic prodigy, who in addition to his native languages English and Welsh,[3] learned Greek, Latin, Persian, Arabic, Hebrew and the basics of Chinese writing at an early age.[4] By the end of his life he knew thirteen languages thoroughly and another twenty-eight reasonably well, making him a hyperpolyglot.

Jones' father died when he was aged three, and his mother Mary Nix Jones raised him. He was sent to Harrow School in September 1753 and then went on to University College, Oxford. He graduated there in 1768 and became M.A. in 1773. Financially constrained, he took a position tutoring the seven-year-old Lord Althorp, son of Earl Spencer. For the next six years he worked as a tutor and translator. During this time he published Histoire de Nader Chah (1770), a French translation of a work originally written in Persian by Mirza Mehdi Khan Astarabadi. This was done at the request of King Christian VII of Denmark: he had visited Jones, who by the age of 24 had already acquired a reputation as an orientalist. This would be the first of numerous works on Persia, Turkey, and the Middle East in general. 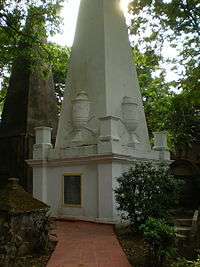 Tomb of William Jones in Calcutta

In 1770, Jones joined the Middle Temple and studied law for three years, a preliminary to his life-work in India. He was elected a Fellow of the Royal Society on 30 April 1772. After a spell as a circuit judge in Wales, and a fruitless attempt to resolve the conflict that eventually led to the American Revolution in concert with Benjamin Franklin in Paris, he was appointed puisne judge to the Supreme Court of Judicature at Fort William in Calcutta, Bengal on 4 March 1783, and on 20 March he was knighted. In April 1783 he married Anna Maria Shipley, the eldest daughter of Dr. Jonathan Shipley, Bishop of Llandaff and Bishop of St Asaph. Anna Maria used her artistic skills to help Jones document life in India. On 25 September 1783 he arrived in Calcutta.

Jones was a radical political thinker, a friend of American independence. His work The principles of government; in a dialogue between a scholar and a peasant [London?]: printed and distributed gratis by the Society for Constitutional Information, 1783 was the subject of a trial for seditious libel after it was reprinted by his brother-in-law William Shipley.

In the Subcontinent he was entranced by South Asian cultures, an as-yet untouched field in European scholarship, and on 15 January 1784 he founded the Asiatic Society in Calcutta. He studied the Vedas with Rāmalocana, a pandit teaching at the Nadiya Hindu, university, becoming a proficient sanskritist.[3] Jones kept up a ten-year correspondence on the topic of jyotisa or Hindu astronomy with fellow orientalist Samuel Davis.[5]

Over the next ten years he would produce a flood of works on India, launching the modern study of the subcontinent in virtually every social science. He also wrote on the local laws, music, literature, botany, and geography, and made the first English translations of several important works of Indian literature. He died in Calcutta on 27 April 1794 at the age of 47 and is buried in South Park Street Cemetery.[6]

Sir William Jones sometimes also went by the nom de plume Youns Uksfardi (یونس اوکسفردی). This pen name can be seen on the inner front cover of his Persian Grammar published in 1771 (and in subsequent editions as well). The second half of the pen name, Uksfardi, Persian rendition of "from Oxford", can be directly attributed to the deep attachment William Jones had for the University of Oxford. The first name Youns is a rendition of Jones.

Jones is also known today for making and propagating the observation about genetic relation between the Indo-European languages. In his Third Anniversary Discourse to the Asiatic Society (1786) he suggested that Sanskrit, Greek and Latin languages had a common root, and that indeed they may all be further related, in turn, to Gothic and the Celtic languages, as well as to Persian.[7]

Although his name is closely associated with this observation, he was not the first to make it. In the 16th century, European visitors to the subcontinent became aware of similarities between local Indo-Iranian and European languages[8] and as early as 1653 Van Boxhorn had published a proposal for a proto-language ("Scythian") for Germanic, Romance, Greek, Baltic, Slavic, Celtic and Iranian.[9] Finally, in a memoir sent to the French Academy of Sciences in 1767 Gaston-Laurent Coeurdoux, a French Jesuit who spent all his life in India, had specifically demonstrated the existing analogy between Sanskrit and European languages.[10][11] In 1786 Jones postulated a proto-language uniting Sanskrit, Iranian, Greek, Latin, Germanic and Celtic, but in many ways his work was less accurate than his predecessors', as he erroneously included Egyptian, Japanese and Chinese in the Indo-European languages, while omitting Hindi.[9]

Nevertheless, Jones' third annual discourse before the Asiatic Society on the history and culture of the Hindus (delivered on 2 February 1786 and published in 1788) with the famed "philologer" passage is often cited as the beginning of comparative linguistics and Indo-European studies.[12]

The Sanscrit language, whatever be its antiquity, is of a wonderful structure; more perfect than the Greek, more copious than the Latin, and more exquisitely refined than either, yet bearing to both of them a stronger affinity, both in the roots of verbs and the forms of grammar, than could possibly have been produced by accident; so strong indeed, that no philologer could examine them all three, without believing them to have sprung from some common source, which, perhaps, no longer exists; there is a similar reason, though not quite so forcible, for supposing that both the Gothic and the Celtic, though blended with a very different idiom, had the same origin with the Sanscrit; and the old Persian might be added to the same family.

This common source came to be known as Proto-Indo-European.[13]

Jones was the first to propose a racial division of the subcontinent involving an Aryan invasion but at that time there was insufficient evidence to support it. It was an idea later taken up by British administrators such as Herbert Hope Risley but remains disputed today.[14]

In 1763, at the age of 17, Jones wrote the poem Caissa in Latin hexameters, based on a 658-line poem called "Scacchia, Ludus" published in 1527 by Marco Girolamo Vida, giving a mythical origin of chess that has become well known in the chess world. He also published an English-language version of the poem.

In the poem the nymph Caissa initially repels the advances of Mars, the god of war. Spurned, Mars seeks the aid of the god of sport, who creates the game of chess as a gift for Mars to win Caissa's favour. Mars wins her over with the game.

Caissa has since been characterised as the "goddess" of chess, her name being used in several contexts in modern chess playing.

Arthur Schopenhauer referred to one of Sir William Jones's publications in §1 of The World as Will and Representation (1819). Schopenhauer was trying to support the doctrine that "everything that exists for knowledge, and hence the whole of this world, is only object in relation to the subject, perception of the perceiver, in a word, representation." He quoted Jones's original English:

... how early this basic truth was recognized by the sages of India, since it appears as the fundamental tenet of the Vedânta philosophy ascribed to Vyasa, is proved by Sir William Jones in the last of his essays: "On the Philosophy of the Asiatics" (Asiatic Researches, vol. IV, p. 164): "The fundamental tenet of the Vedânta school consisted not in denying the existence of matter, that is solidity, impenetrability, and extended figure (to deny which would be lunacy), but in correcting the popular notion of it, and in contending that it has no essence independent of mental perception; that existence and perceptibility are convertible terms."

Schopenhauer used Jones's authority to relate the basic principle of his philosophy to what was, according to Jones, the most important underlying proposition of Vedânta. He made more passing reference to Sir William Jones's writings elsewhere in his works.

Edgar Allan Poe's short story "Berenice" starts with a motto, the first half of a poem, by Ibn Zaiat: Dicebant mihi sodales si sepulchrum amicae visitarem, curas meas aliquantulum fore levatas. It was taken from the works of William Jones, and here is the missing part (from Complete Works, Vol. 2, London, 1799):

My companions said to me, if I would visit the grave of my friend, I might somewhat alleviate my worries. I answered "could she be buried elsewhere than in my heart?"

Listing in most cases only editions and reprints that came out during Jones's own lifetime, books by, or prominently including work by, William Jones, are: