The Celtic languages (usually pronounced /ˈkɛltɪk/ but sometimes /ˈsɛltɪk/)[2] are descended from Proto-Celtic, or "Common Celtic"; a branch of the greater Indo-European language family.[3] The term "Celtic" was first used to describe this language group by Edward Lhuyd in 1707,[4] following Paul-Yves Pezron who had already made the explicit link between the Celts described by classical writers and the Welsh and Breton languages.[5]

During the 1st millennium BC, they were spoken across much of Europe, in the Iberian Peninsula, from the Atlantic and North Sea coastlines, up to the Rhine valley and down the Danube valley to the Black Sea, the northern Balkan Peninsula and in central Asia Minor. The spread to Cape Breton and Patagonia occurred in modern times.

The other two, Cornish (a Brittonic language) and Manx (a Goidelic language), died in modern times[9][10][11] with their presumed last native speakers in 1777 and 1974 respectively. For both these languages, however, revitalisation movements have led to the adoption of these languages by adults and children and produced some native speakers.[12][13] 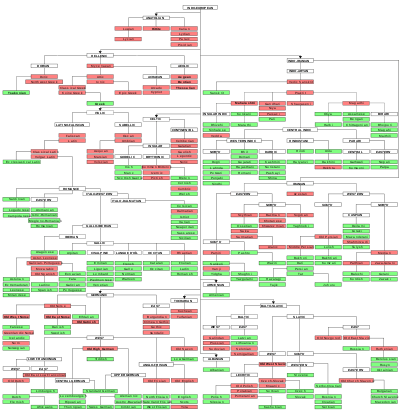 Scholarly handling of the Celtic languages has been rather argumentative owing to scarceness of primary source data. Some scholars (such as Cowgill 1975; McCone 1991, 1992; and Schrijver 1995) distinguish Continental Celtic and Insular Celtic, arguing that the differences between the Goidelic and Brittonic languages arose after these split off from the Continental Celtic languages. Other scholars (such as Schmidt 1988) distinguish between P-Celtic and Q-Celtic, putting most of the Gaulish and Brittonic languages in the former group and the Goidelic and Celtiberian languages in the latter. The P-Celtic languages (also called Gallo-Brittonic) are sometimes seen (for example by Koch 1992) as a central innovating area as opposed to the more conservative peripheral Q-Celtic languages.

The Breton language is Brittonic, not Gaulish, though there may be some input from the latter,[55] having been introduced from Southwestern regions of Britain in the post-Roman era and having evolved into Breton – still partially intelligible by modern Welsh and Cornish speakers.

The distinction of Celtic into these four sub-families most likely occurred about 900 BC according to Gray and Atkinson[56][57] but, because of estimation uncertainty, it could be any time between 1200 and 800 BC. However, they only considered Gaelic and Brythonic. The controversial paper by Forster and Toth[58] included Gaulish and put the break-up much earlier at 3200 BC ± 1500 years. They support the Insular Celtic hypothesis. The early Celts were commonly associated with the archaeological Urnfield culture, the Hallstatt culture, and the La Tène culture, though the earlier assumption of association between language and culture is now considered to be less strong.[59][60] 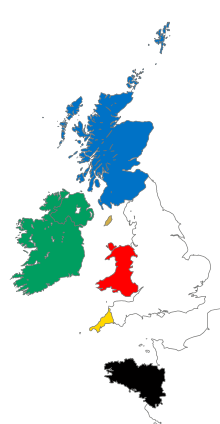 There are legitimate scholarly arguments in favour of both the Insular Celtic hypothesis and the P-Celtic/Q-Celtic hypothesis. Proponents of each schema dispute the accuracy and usefulness of the other's categories. However, since the 1970s the division into Insular and Continental Celtic has become the more widely held view (Cowgill 1975; McCone 1991, 1992; Schrijver 1995), but in the middle of the 1980s, the P-Celtic/Q-Celtic hypothesis found new supporters (Lambert 1994), because of the inscription on the Larzac piece of lead (1983), the analysis of which reveals another common phonetical innovation -nm- > -nu (Gaelic ainm / Gaulish anuana, Old Welsh enuein "names"), that is less accidental than only one. The discovery of a third common innovation, would allow the specialists to come to the conclusion of a Gallo-Brittonic dialect (Schmidt 1986; Fleuriot 1986).

The interpretation of this and further evidence is still quite contested, and the main argument in favour of Insular Celtic is connected with the development of the verbal morphology and the syntax in Irish and British Celtic, which Schumacher regards as convincing, while he considers the P-Celtic/Q-Celtic division unimportant and treats Gallo-Brittonic as an outdated hypothesis.[45] Stifter affirms that the Gallo-Brittonic view is "out of favour" in the scholarly community as of 2008 and the Insular Celtic hypothesis "widely accepted".[61]

Within the Indo-European family, the Celtic languages have sometimes been placed with the Italic languages in a common Italo-Celtic subfamily, a hypothesis that is now largely discarded, in favour of the assumption of language contact between pre-Celtic and pre-Italic communities.

How the family tree of the Celtic languages is ordered depends on which hypothesis is used:

Eska (2010)[62] evaluates the evidence as supporting the following tree, based on shared innovations, though it is not always clear that the innovations are not areal features. It seems likely that Celtiberian split off before Cisalpine Celtic, but the evidence for this is not robust. On the other hand, the unity of Gaulish, Goidelic, and Brittonic is reasonably secure. Schumacher (2004, p. 86) had already cautiously considered this grouping to be likely genetic, based, among others, on the shared reformation of the sentence-initial, fully inflecting relative pronoun *i̯os, *i̯ā, *i̯od into an uninflected enclitic particle. Eska sees Cisalpine Gaulish as more akin to Lepontic than to Transalpine Gaulish.

Eska considers a division of Transalpine–Goidelic–Brittonic into Transalpine and Insular Celtic to be most probable because of the greater number of innovations in Insular Celtic than in P-Celtic, and because the Insular Celtic languages were probably not in great enough contact for those innovations to spread as part of a sprachbund. However, if they have another explanation (such as an SOV substratum language), then it is possible that P-Celtic is a valid clade, and the top branching would be:

Although there are many differences between the individual Celtic languages, they do show many family resemblances.

Article 1 of the Universal Declaration of Human Rights:

All human beings are born free and equal in dignity and rights. They are endowed with reason and conscience and should act towards one another in a spirit of brotherhood.

It has been suggested that several poorly-documented languages may possibly have been Celtic.

It is also possible that the Q-Celtic languages alone, including Goidelic, originated in western Iberia (a theory that was first put forward by Edward Lhuyd in 1707) and/or shared a common linguistic ancestor with Lusitanian.[69] Secondary evidence for this hypothesis has been found in research by biological scientists, who have identified (firstly) deep-rooted similarities in human DNA found precisely in both the former Lusitania and Ireland,[70][71] and; (secondly) the so-called "Lusitanian distribution" of animals and plants unique to western Iberia and Ireland. Both of these phenomena are now generally believed to have resulted from human emigration from Iberia to Ireland, during the late Paleolithic or early Mesolithic eras.[72]
Other scholars see greater linguistic affinities between Lusitanian, proto-Italic and Old European.[73][74]