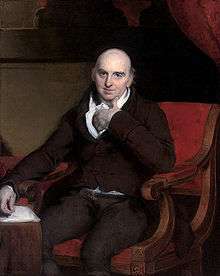 William Morgan (by Thomas Lawrence), on view at the Institute of Actuaries, Staple Inn Hall, London

William Morgan, FRS (26 May 1750 – 4 May 1833) was a Welsh physician, physicist and statistician, who is considered the father of modern actuarial science.

He was born in Bridgend, Glamorganshire, son to physician William Morgan and Sarah, née Price. His brother was George Cadogan Morgan. At eighteen he came to London for medical training at Guy's Hospital, working also as an apothecary to pay his way. He did not complete his training, but after one year returned to Bridgend to join his father's practice. He was not popular with his father's patients: they thought him inexperienced and they resented receiving treatment from someone with a deformity—Morgan suffered from a club foot. After his father's death he left medicine and, on the recommendation of his mother's brother, Richard Price, in 1774 was appointed Assistant Actuary of The Equitable Life Assurance Society. [1] In February 1775, after the death of John Pocock, he was elected Actuary. By the time he retired on 2 December 1830, 56 years later at the age of 80, he laid the foundations of the actuarial profession —in fact the term "actuarial" became attached to the profession because of his title.

He won the Copley Medal in 1789, for his two papers on the values of Reversions and Survivorships,[2] printed in the last two volumes of the Philosophical Transactions of the Royal Society, in the field of actuarial science: 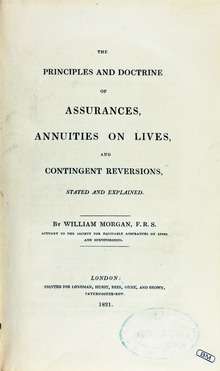 The principles and doctrine of assurance, 1821.

He was elected a Fellow of the Society, in May of the following year.[3]

Advised by Joseph Priestley, a family friend, he developed an interest in scientific experimentation and is credited with being the first to record the "invisible light" produced when a current is passed through a partly evacuated glass tube: "the first x-ray tube".[4]

Later in life, through his uncle, Richard Price, he became friends with noted radicals, including Tom Paine and Francis Burdett. He escaped with only a warning when in 1794, the authorities rounded up members of the movement and charged them with treason.[5]