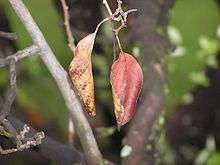 Wilted fig leaves on a branch

Wilting is the loss of rigidity of non-woody parts of plants. This occurs when the turgor pressure in non-lignified plant cells falls towards zero, as a result of diminished water in the cells. The rate of loss of water from the plant is greater than the absorption of water in the plant. The process of wilting modifies the leaf angle distribution of the plant (or canopy) towards more erectophile conditions.

Lower water availability may result from:

Wilting diminishes the plant's ability to transpire and grow. Permanent wilting leads to plant death. Symptoms of wilting and blights resemble one another.

In woody plants, reduced water availability leads to cavitation of the xylem.

Wilting occurs in plants such as Balsam and tulasi/tulsi. Wilting is an effect of the plant growth inhibiting hormone, abscisic acid.

With Cucurbits, wilting can be caused by the Squash vine borer.[1]