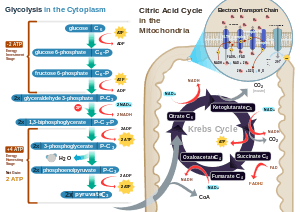 Cellular respiration is a set of metabolic reactions and processes that take place in the cells of organisms to convert biochemical energy from nutrients into adenosine triphosphate (ATP), and then release waste products.[1] The reactions involved in respiration are catabolic reactions, which break large molecules into smaller ones, releasing energy in the process, as weak so-called "high-energy" bonds are replaced by stronger bonds in the products. Respiration is one of the key ways a cell releases chemical energy to fuel cellular activity. Cellular respiration is considered an exothermic redox reaction which releases heat. The overall reaction occurs in a series of biochemical steps, most of which are redox reactions themselves. Although technically, cellular respiration is a combustion reaction, it clearly does not resemble one when it occurs in a living cell because of the slow release of energy from the series of reactions.

Nutrients that are commonly used by animal and plant cells in respiration include sugar, amino acids and fatty acids, and the most common oxidizing agent (electron acceptor) is molecular oxygen (O2). The chemical energy stored in ATP (its third phosphate group is weakly bonded to the rest of the molecule and is cheaply broken allowing stronger bonds to form, thereby transferring energy for use by the cell) can then be used to drive processes requiring energy, including biosynthesis, locomotion or transportation of molecules across cell membranes. 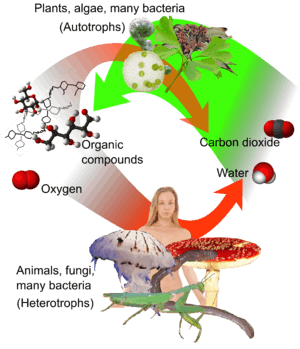 Aerobic respiration (red arrows) is the main means by which both fungi and animals utilize chemical energy in the form of organic compounds that were previously created through photosynthesis (green arrow).

Aerobic respiration requires oxygen (O2) in order to create ATP. Although carbohydrates, fats, and proteins are consumed as reactants, it is the preferred method of pyruvate breakdown in glycolysis and requires that pyruvate enter the mitochondria in order to be fully oxidized by the Krebs cycle. The products of this process are carbon dioxide and water, but the energy transferred is used to break bonds in ADP as the third phosphate group is added to form ATP (adenosine triphosphate), by substrate-level phosphorylation, NADH and FADH2

The negative ΔG indicates that the reaction can occur spontaneously.

The potential of NADH and FADH2 is converted to more ATP through an electron transport chain with oxygen as the "terminal electron acceptor". Most of the ATP produced by aerobic cellular respiration is made by oxidative phosphorylation. This works by the energy released in the consumption of pyruvate being used to create a chemiosmotic potential by pumping protons across a membrane. This potential is then used to drive ATP synthase and produce ATP from ADP and a phosphate group. Biology textbooks often state that 38 ATP molecules can be made per oxidised glucose molecule during cellular respiration (2 from glycolysis, 2 from the Krebs cycle, and about 34 from the electron transport system).[2] However, this maximum yield is never quite reached because of losses due to leaky membranes as well as the cost of moving pyruvate and ADP into the mitochondrial matrix, and current estimates range around 29 to 30 ATP per glucose.[2]

Aerobic metabolism is up to 15 times more efficient than anaerobic metabolism (which yields 2 molecules ATP per 1 molecule glucose). However some anaerobic organisms, such as methanogens are able to continue with anaerobic respiration, yielding more ATP by using other inorganic molecules (not oxygen) as final electron acceptors in the electron transport chain. They share the initial pathway of glycolysis but aerobic metabolism continues with the Krebs cycle and oxidative phosphorylation. The post-glycolytic reactions take place in the mitochondria in eukaryotic cells, and in the cytoplasm in prokaryotic cells. 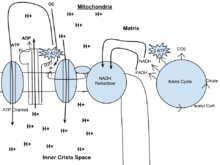 Glycolysis is a metabolic pathway that takes place in the cytosol of cells in all living organisms. This pathway can function with or without the presence of oxygen. In humans, aerobic conditions produce pyruvate and anaerobic conditions produce lactate. In aerobic conditions, the process converts one molecule of glucose into two molecules of pyruvate (pyruvic acid), generating energy in the form of two net molecules of ATP. Four molecules of ATP per glucose are actually produced, however, two are consumed as part of the preparatory phase. The initial phosphorylation of glucose is required to increase the reactivity (decrease its stability) in order for the molecule to be cleaved into two pyruvate molecules by the enzyme aldolase. During the pay-off phase of glycolysis, four phosphate groups are transferred to ADP by substrate-level phosphorylation to make four ATP, and two NADH are produced when the pyruvate are oxidized. The overall reaction can be expressed this way:

Glycolysis can be literally translated as "sugar splitting". [3]

Pyruvate is oxidized to acetyl-CoA and CO2 by the pyruvate dehydrogenase complex (PDC). The PDC contains multiple copies of three enzymes and is located in the mitochondria of eukaryotic cells and in the cytosol of prokaryotes. In the conversion of pyruvate to acetyl-CoA, one molecule of NADH and one molecule of CO2 is formed.

This is also called the Krebs cycle or the tricarboxylic acid cycle. When oxygen is present, acetyl-CoA is produced from the pyruvate molecules created from glycolysis. When oxygen is present, the mitochondria will undergo aerobic respiration which leads to the Krebs cycle. However, if oxygen is not present, fermentation of the pyruvate molecule will occur. In the presence of oxygen, when acetyl-CoA is produced, the molecule then enters the citric acid cycle (Krebs cycle) inside the mitochondrial matrix, and is oxidized to CO2 while at the same time reducing NAD to NADH. NADH can be used by the electron transport chain to create further ATP as part of oxidative phosphorylation. To fully oxidize the equivalent of one glucose molecule, two acetyl-CoA must be metabolized by the Krebs cycle. Two waste products, H2O and CO2, are created during this cycle.

The net gain of high-energy compounds from one cycle is 3 NADH, 1 FADH2, and 1 GTP; the GTP may subsequently be used to produce ATP. Thus, the total yield from 1 glucose molecule (2 pyruvate molecules) is 6 NADH, 2 FADH2, and 2 ATP.

In eukaryotes, oxidative phosphorylation occurs in the mitochondrial cristae. It comprises the electron transport chain that establishes a proton gradient (chemiosmotic potential) across the boundary of inner membrane by oxidizing the NADH produced from the Krebs cycle. ATP is synthesized by the ATP synthase enzyme when the chemiosmotic gradient is used to drive the phosphorylation of ADP. The electrons are finally transferred to exogenous oxygen and, with the addition of two protons, water is formed.

The table below describes the reactions involved when one glucose molecule is fully oxidized into carbon dioxide. It is assumed that all the reduced coenzymes are oxidized by the electron transport chain and used for oxidative phosphorylation.

Although there is a theoretical yield of 38 ATP molecules per glucose during cellular respiration, such conditions are generally not realized because of losses such as the cost of moving pyruvate (from glycolysis), phosphate, and ADP (substrates for ATP synthesis) into the mitochondria. All are actively transported using carriers that utilize the stored energy in the proton electrochemical gradient.

The outcome of these transport processes using the proton electrochemical gradient is that more than 3 H+ are needed to make 1 ATP. Obviously this reduces the theoretical efficiency of the whole process and the likely maximum is closer to 28–30 ATP molecules.[2] In practice the efficiency may be even lower because the inner membrane of the mitochondria is slightly leaky to protons.[4] Other factors may also dissipate the proton gradient creating an apparently leaky mitochondria. An uncoupling protein known as thermogenin is expressed in some cell types and is a channel that can transport protons. When this protein is active in the inner membrane it short circuits the coupling between the electron transport chain and ATP synthesis. The potential energy from the proton gradient is not used to make ATP but generates heat. This is particularly important in brown fat thermogenesis of newborn and hibernating mammals.

According to some of newer sources the ATP yield during aerobic respiration is not 36–38, but only about 30–32 ATP molecules / 1 molecule of glucose [5], because:

So finally we have, per molecule of glucose

Without oxygen, pyruvate (pyruvic acid) is not metabolized by cellular respiration but undergoes a process of fermentation. The pyruvate is not transported into the mitochondrion, but remains in the cytoplasm, where it is converted to waste products that may be removed from the cell. This serves the purpose of oxidizing the electron carriers so that they can perform glycolysis again and removing the excess pyruvate. Fermentation oxidizes NADH to NAD+ so it can be re-used in glycolysis. In the absence of oxygen, fermentation prevents the buildup of NADH in the cytoplasm and provides NAD+ for glycolysis. This waste product varies depending on the organism. In skeletal muscles, the waste product is lactic acid. This type of fermentation is called lactic acid fermentation. In strenuous exercise, when energy demands exceed energy supply, the respiratory chain cannot process all of the hydrogen atoms joined by NADH. During anaerobic glycolysis, NAD+ regenerates when pairs of hydrogen combine with pyruvate to form lactate. Lactate formation is catalyzed by lactate dehydrogenase in a reversible reaction. Lactate can also be used as an indirect precursor for liver glycogen. During recovery, when oxygen becomes available, NAD+ attaches to hydrogen from lactate to form ATP. In yeast, the waste products are ethanol and carbon dioxide. This type of fermentation is known as alcoholic or ethanol fermentation. The ATP generated in this process is made by substrate-level phosphorylation, which does not require oxygen.

Fermentation is less efficient at using the energy from glucose: only 2 ATP are produced per glucose, compared to the 38 ATP per glucose nominally produced by aerobic respiration. This is because the waste products of fermentation still contain chemical potential energy that can be released by oxidation. Ethanol, for example, can be burned in an internal combustion engine like gasoline. Glycolytic ATP, however, is created more quickly. For prokaryotes to continue a rapid growth rate when they are shifted from an aerobic environment to an anaerobic environment, they must increase the rate of the glycolytic reactions. For multicellular organisms, during short bursts of strenuous activity, muscle cells use fermentation to supplement the ATP production from the slower aerobic respiration, so fermentation may be used by a cell even before the oxygen levels are depleted, as is the case in sports that do not require athletes to pace themselves, such as sprinting.

Cellular respiration is the process by which biological fuels are oxidised in the presence of an inorganic electron acceptor (such as oxygen) to produce large amounts of energy, to drive the bulk production of ATP.

Anaerobic respiration is used by some microorganisms in which neither oxygen (aerobic respiration) nor pyruvate derivatives (fermentation) is the final electron acceptor. Rather, an inorganic acceptor such as sulfate or nitrate is used. Such organisms are typically found in unusual places such as underwater caves or near hydrothermal vents at the bottom of the ocean.