The Windward Islands are the southern, generally larger islands of the Lesser Antilles, within the West Indies. They lie south of the Leeward Islands, between latitudes 12° and 16° N and longitudes 60° and 62° W in one definition. As a group they start from Dominica and reach southward to the North of Trinidad & Tobago.

The Windward Islands are called such because they were more windward to sailing ships arriving to the New World than the Leeward Islands, given that the prevailing trade winds in the West Indies blow east to west. The trans-Atlantic currents and winds that provided the fastest route across the ocean brought these ships to the rough dividing line between the Windward and Leeward islands.

Dominica is the dividing line between the Windward and Leeward islands. Guadeloupe and the islands to the south were designated "Windward Islands". Later on, all islands north of Martinique became known as the "Leeward Islands".

Vessels in the Atlantic slave trade departing from the British Gold Coast and Gulf of Guinea in Africa would first encounter the southeasternmost "Windward" islands of the Lesser Antilles in their west-northwesterly heading to final destinations in the Caribbean and North and Central America. The chain of Windward Islands forms a part of the easternmost boundary of the Caribbean Sea.[1][2]

Most of the present "Windward Islands" were once colonial island territories of France, also known as the French Antilles. 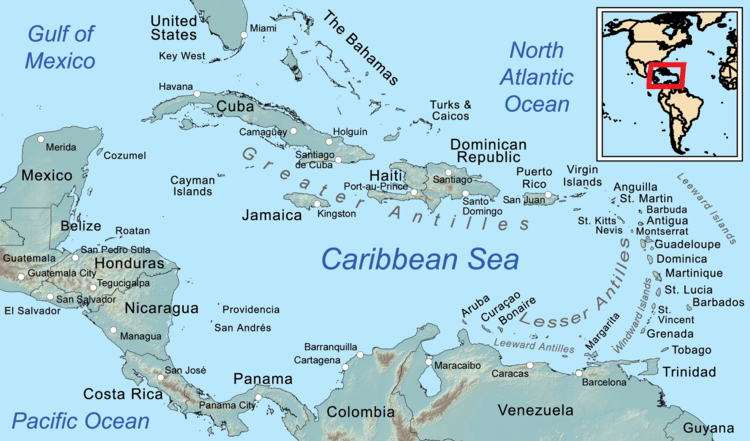 The Windward Islands are shown/labelled on the map's lower right side.