This article is about the capital city of Dominica. For a type of common reed, see Phragmites. For other uses, see Roseau (disambiguation).

Roseau (Dominican Creole: Wozo) is the capital and largest city of Dominica, with a population of 16,582. It is a small and compact urban settlement, in the Saint George parish and surrounded by the Caribbean Sea, the Roseau River and Morne Bruce. Built on the site of the ancient Kalinago Indian village of Sairi, it is the oldest and most important urban settlement on the island of Dominica.

It is on the west (leeward) coast of Dominica and has a combination of modern and colonial French architecture.

Roseau is Dominica's most important port for foreign trade. Some exports include bananas, bay oil, vegetables, grapefruit, oranges, and cocoa. The service sector is also a large part of the local economy.

There is a prominent diocese called Roman Catholic Diocese of Roseau.

The city of Roseau sits on an alluvial fan formed hundreds of years ago as the Roseau River meandered across the area from what is now known as Newtown to its current location. Over the last 2,000 years, Amerindians migrating through the islands settled the area attracted by the nearby river. With the arrival of the Europeans in the 16th and 17th centuries, a small settlement was established by the French who, in their tradition of naming places after what they found there, used their name for the river reeds that grew along the banks. A plan was created for the settlement that mirrored examples in France where streets extended from a central point — what is today the Old Market — and spread out to the rest of the settlement.

Conflict raged between the French and the British over the area on several occasions. The British gained a stronghold. By the late 18th and early 19th centuries, they set out plans for the city that included fortifications and government structures, the grid street system, and blocks and new urban areas to the north and south, known today as Potter's Ville and Newtown. Goodwill was established in the 1950s and Bath Estate in the early 1980s. Since then several new semi-urban settlements — such as Stock Farm, Castle Comfort, and Wall House — have been constructed around the existing ones. Some older settlements like Fond Cole and Canefield nowadays belong to the semi-urban area around Roseau.

Morne Bruce provides panoramic views of most of downtown Roseau and north toward Woodbridge Bay deepwater port and Fond Cole. From Morne Bruce there are views of the Botanic Gardens at its base as well as the Caribbean Sea which look quite spectacular when cruise liners are in port.

Roseau's climate is a tropical rainforest climate, featuring relatively constant temperatures throughout the year with average high temperatures generally between 28 and 31 °C (82 and 88 °F) and average low temperatures between 19 and 23 °C (66 and 73 °F). Rainfall is common throughout the year, with the city seeing an annual average nearly 2,000 mm (79 in). Roseau features a noticeably drier stretch from February through April, though each of these months on average sees at least 100 mm (4 in) of precipitation.

The central district of Roseau is tightly packed with small and large houses and even larger modern concrete structures. There is little green or open space in the city; there is even less today, as many of the courtyards that were once commonplace are giving way to office space. The district is, however, framed in every direction by natural elements. The sea and the river provide water elements while the Botanical Gardens and the Government House gardens frame the city with green space. These elements are rare in the Caribbean. No other centre in the region has such extensive botanical gardens with such central location, and the Roseau River is among the largest that flow through any Caribbean capital.

The urban structure of Central Roseau is based on an irregular grid system of miniature proportions, making it a highly illegible city. Even though the grid area is not extensive, it is relatively easy for a visitor to get lost. The grid area has some 80 blocks in an area of 30 hectares (74 acres). In comparison, the grid areas of Kingstown and Castries — capitals of Saint Vincent and Saint Lucia — have some 50 and 60 blocks in the areas of over 40 ha (99 acre). The average block size in Central Roseau is thus some ⅓ hectare (1 acre), i.e., about half of the figure of Central Kingstown.

There are some fine examples of West Indian architecture in Roseau. The ones that stand out the most are the French Colonial style and the vernacular form. Much of the French influence can be found along King George V Street. Around the city there are good examples of the English influence in large colonial town houses and colonial public/government buildings. 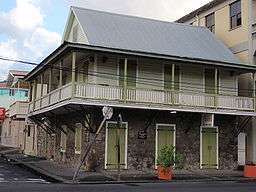 The churches in Roseau are fine examples of Europe in Dominica with a bit of creolization. The Roman Catholic Cathedral stands prominent in Gothic Romanesque revival and the Anglican Church on Victoria Street in Georgian style. 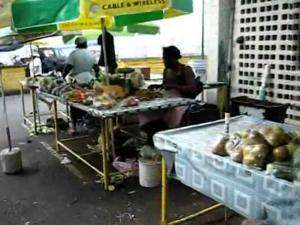 Because of the suburban sprawl, few people live in Central Roseau, but more of them commute daily. Motorized vehicles pour into the central district introducing a mode of point-to-point interaction in an environment that was created for multiple use. As elders said, first there were no streets but just a space between the buildings. The streets of Roseau, and especially those of its central district, are not only ways to move from place to place but they are places themselves. They are used as gardens, playing fields, and social meeting places.

The Botanical Gardens on the fringes of the central district are mostly used by children.

In Roseau, there are many opportunities for recreation. Many people seek the tranquility and cool of the Botanical Gardens as a getaway on Sunday afternoons and at lunch. It is a popular venue for local cricket matches and sports training. Football is popular; there are several pitches throughout the city (at Newtown, Potters Ville, and Bath Estate), as well as in the sports stadium at Windsor Park.

In 2007, Windsor Park, home to the Dominica national football team, was completed with a donation of EC$33 million from the government of the People's Republic of China.

Elsewhere it is not uncommon to find that a section of the street, sidewalk or the beach has been adapted for makeshift games of cricket or football.

Popular sports include netball, basketball, rounders and (to a much lesser extent) tennis.

There are no world-famous hotel chains in the city. The most famous is the Fort Young Hotel.[4] In addition there are several small family owned establishments in and on the outskirts of Roseau.

Dominica Broadcasting Corporation, the national radio station, and two private radio stations are in the capital.

Roseau is home to service clubs including, Kiwanis, Rotary and Lions. There are other organizations such as the local humane society and conservation society. ChildFund International USA has an office in Roseau from where it runs its child centered development programs for Dominica and Saint Vincent.

The Dominica Association of Industry and Commerce, Waitukubuli Ecological Foundation, Dominica Tourism Association and others are based in the city.

As the most important town on the island and hub of all business activity, the city is a central point of the road networks on the island. It is an important link between northern, eastern, and southern bound traffic.

There are no rail or subway systems.

Roseau has been the historical centre of education on the island. There are six secondary schools in the city as well as eight primary schools. A community college, the Dominica State College, is in Roseau. A private medical school, All Saints School of Medicine, also calls Roseau home.

Several embassies are in the city. They include the Brazilian, the Chinese, the Cuban, and the Venezuelan embassies, with a couple of other consulates around the city.