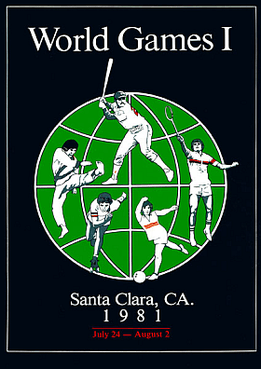 Cover of the World Games I brochure produced for Santa Clara in 1981.

The 1981 World Games were the first World Games and were held in Santa Clara, California in the United States. The games featured sports that were not included in the Olympics, including tug-of-war, racquetball, baseball and softball, artistic roller skating, roller hockey, roller speed skating, fin swimming, karate, women's water polo, bowling, bodybuilding, casting and taekwondo.[2] Best estimates for attendance figures were that about 80,000 spectators witnessed the first World Games.[1]

102 titles were awarded in 16 sports, including one title in one invitational sport.[3] A structured invitational sport program did not exist at the time. An agreement was reached with FINA in the lead-up to the games not to allow women's water polo athletes to march in the opening ceremony, to assuage the displeasure of the International Olympic Committee (IOC) for its being included in the program.[4] Boxing was also to have been contested in these games and was featured on organizers' promotional materials. However, AIBA withdrew the sport from the program in the weeks before the opening of the games because of IOC disapproval.[4]

The medal tally during the first World Games is as follows. United States was the over-all champion of this edition.[6]

* The mixed badminton title was won by a pair of players from Sweden and Great Britain. Both nations are counted as having won a gold medal.