Nearly 6,000 athletes, officials, coaches, referees and others from 103 countries participated in the 2009 Kaohsiung World Games, setting a record high for the multi-sport competition. The International World Games Association (IWGA) President Ron Froehlich praised the July 16–26 games as the "best games ever."[1]

The design of the emblem for the World Games 2009 is based on the first Chinese character in the city’s name. The character " kao" (高) means high or superior in English. The toponym stylized as a multicolored ribbon aims to create an atmosphere of festivity and celebration. The warm colors, orange and magenta, at the top and green and blue at the bottom symbolize the sun rising over the ocean and mirror Kaohsiung well: a passionate city with plenty of sunshine – a vibrant metropolis by the sea. 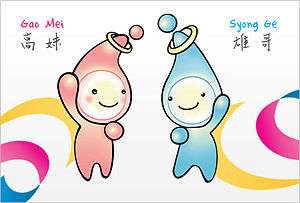 Gao Mei (高妹) and Syong Ge (雄哥) are named after the host city, Kaohsiung (according to Tongyong Pinyin). They are intended to personify it as "a city of the sea and the sun", to emphasize "ecology and environmental protection", and to symbolize the "friendliness and hospitality" of the city's residents.[2] 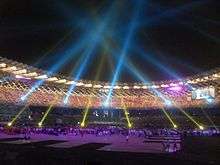 The opening ceremony, on July 16, was held in the Main Stadium, and involved 4,000 performers. It was designed to provide "a platform for the world to understand Taiwan better", and focused on music, dancing and depictions of Taiwanese culture, including its aboriginal culture. The ceremony was watched by an estimated 100 million people worldwide.[3]

Among the foreign dignitaries in attendance was the President of Nauru, Marcus Stephen, one of Taiwan's diplomatic allies and himself a former athlete, having won seven gold medals in weightlifting at the Commonwealth Games.[4]

Although China had sent athletes to compete, they were absent from the opening ceremony, reportedly due to Ma Ying-jeou inaugurating the Games in his capacity as the head of state.[5]

Kaohsiung Mayor Chen Chu said the city has shown "soft" power in staging the World Games that concluded and praised Kaohsiung residents for their passion in participating in the event. The mayor spoke at a news conference held after the closing ceremony during which International World Games Association (IWGA) President Ron Froehlich praised the July 16–26 games as the "best games ever."[1]

Chen noted that after the city was awarded the right to host the Games in 2005, it was determined to make it a success, and she said the city showed "confidence and competence" in staging the first international sports event held in Taiwan after "numerous daunting coordination challenges." She also praised the maturity of Kaohsiung residents, saying that their enthusiastic participation and passionate cheering for athletes from every country was "touching." Revenues from ticket sales at the World Games have been initially estimated at NT$65 million. Chen noted Froehlich's praise of Kaohsiung, which she said has displayed friendship, cooperation and community participation, and offered her best wishes to Cali, Colombia, which will host the next World Games in 2013.

She said Kaohsiung is an open, rich and pluralistic city that respects human rights and tolerates different views and political stances as long as they are expressed in a peaceful manners. Concerning the absence of the athletes from China, which was reported to be a boycott, from the opening and closing ceremonies of the World Games, she said that as a big country, she expected it to show more grace and tolerance.

The category names and sport names are shown as listed on the official event website. There were five invitational sports which are marked with an asterisk (*).

The medal tally during the eighth World Games is as follows. Russia was the overall champion of this edition.[12]

In the following calendar for the World Games 2009, each blue box represents an event competition, such as a qualification round, on that day. The yellow boxes represent days during which medal-awarding finals for a sport were held. Each bullet in these boxes is an event final, the number of bullets per box representing the number of finals that were contested on that day. On the left the calendar lists each sport with events held during the Games, and at the right how many gold medals were won in that sport. There is a key at the top of the calendar to aid the reader.[13]