XXL is an American hip hop magazine, published by Townsquare Media, founded in 1997.

In August 1997,[1] Harris Publications released the first issue of XXL. It featured rappers Jay-Z and Master P on a double cover.[2] In December 2006, XXL took over the struggling hip hop producer and DJ magazine Scratch (another publication owned by Harris Publications), re-branding it as XXL Presents Scratch Magazine. However Scratch shut down less than a year later in September 2007.

Other titles with limited runs have been launched under the XXL brand, including Hip-Hop Soul, Eye Candy and Shade45. XXL has released many other special projects including tour programs, mixtapes and exclusive DVDs. XXL also maintains a popular website, which provides daily hip hop news, original content and content from the magazine.[3]

In 2013, XXL started their own annual awards. With the top 5 being chosen by a public vote and all other winners and nominees picked by the XXL staff.

On October 14, 2014, Townsquare announced it would continue print publication of XXL.[5] In December 2014 the company reported that the magazine would be published on a quarterly basis.[4]

The magazine's past editors include Reginald C. Dennis (formerly of The Source), Sheena Lester (former editor-in-chief of RapPages and Vibe music editor), Elliott Wilson (formerly of ego trip and The Source, currently locked in at #7 slot on The Source's Digital 30 list.)[6][7] and Datwon Thomas (former Editor-In-Chief of King).

In May 2009, Datwon Thomas resigned from XXL and executive editor Vanessa Satten, who had been with XXL since 1998, was named the new Editor-in-Chief.[8] 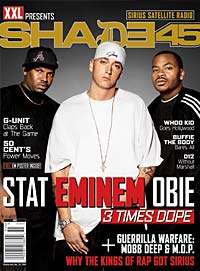 XXL executive Publisher, Jonathan Rheingold, stated that typically magazines based around particular artists were not favorable, but "since Shade 45 is a truly authentic and uncensored rap radio channel, the marriage with the XXL brand made sense," with the feeling that it is what would interest rap fans.[9]

On August 20, 2013 XXL released its 150th issue, also celebrating its sixteenth anniversary. The issue featured the first solo cover on the magazine from Drake, and rappers such as Kendrick Lamar and B.o.B reviewing classic albums.[2]

Starting in 2007 (skipping 2008),[12] XXL also releases its annual Top 10 Freshman list. The issue features the ten picks of whom to watch out for, and on the cover of the magazine and showcases new rappers that aren't well known, but are considered to be on the rise. The list has become known to create buzz and is credited for giving many artists their first taste of fame.[13][14][15]