Xacobeo Galicia was a professional continental cycling team from Spain. It competed in the UCI Europe Tour and, when selected as a wild card, in UCI ProTour events. The creation of the team was announced on July 11, 2006 as Fundación Ciclismo Galego following the withdrawal of four of the nine Spanish professional cycling teams from the sport. Xacobeo Galicia was managed by Rodrigo Rodriguez, with assistance from directeur sportif Álvaro Pino, Jesús Blanco Villar and José Angel Vidal.

The team received wildcard invitations to the Vuelta a España in 2007 and 2008.

It disappeared in 2010 following the withdrawal of the Xunta de Galicia as sponsors.

In 2006, the Galician regional government, the Xunta de Galicia, proposed the creation of a Galician professional cycling team in an attempt to emulate the success the Basque government-sponsored Euskaltel-Euskadi team.

The project received not only the economic support of the Xunta but that of the former Russian international footballer Valery Karpin, who following his retirement had set up Valery Karpin, S.L., a property company in the region.

On August 26, 2008 with the acquisition of a new sponsor the team changed its name from Karpin Galicia to Xacobeo Galicia. 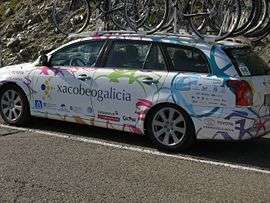