The Xinyi–Changxing Railway or Xinchang Railway (simplified Chinese: 新沂长兴铁路; traditional Chinese: 新沂長興鐵路; pinyin: Xīnyí Chángxīng tiělù), also known as the Xinchang Line (simplified Chinese: 新长线; traditional Chinese: 新長線; pinyin: Xīncháng xiàn), is a single-track railroad in eastern China between the cities of Xinyi, Jiangsu Province and Changxing County in Zhejiang Province. It runs north-south through the entire length of Jiangsu Province and the northern tip of Zhejiang. Major cities along route include Huaian, Yancheng, Haian, Jingjiang, Jiangyin and Yixing. Including a 62.5 km spur from Haian to Nantong, the Xinchang Railway is 638 km in total length.

The Xinchang Railway was the first railway to be built in Jiangsu Province north of the Yangtze River. Construction began in September 1998 and the entire line was completed in April 2005. Passenger and freight service commenced on July 1, 2005. A connection to Nantong (a section of the Nanjing–Qidong Railway) was added in 2008.[1] 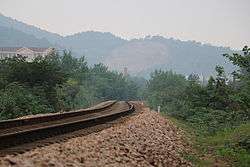 The Xinchang Railway in Yixing.

The Xinchang Railway connects the Longhai and Jiaozhou-Xinyi Railways in the north and with the Nanjing-Nantong, Beijing-Shanghai, Xuancheng-Hangzhou Railways in the south.