Nantong (Chinese: 南通; pinyin: Nántōng; former names: Nan-t'ung, Nantung, Tongzhou, or Tungchow; Qihai dialect: [nie tʰoŋ]) is a prefecture-level city in Jiangsu province, China. Located on the northern bank of the Yangtze River, near the river mouth. Nantong is a vital river port bordering Yancheng to the north, Taizhou to the west, Suzhou and Shanghai to the south across the river, and the East China Sea to the east. Its current population is 7,282,835 at the 2010 census, 1,994,708 of whom live in the built-up area made up of three urban districts.

Because the coast of the East China Sea is constantly expanding eastward as the Yangtze River adds silt to its delta, the distance between Nantong and the seashore is getting longer than it once was in ancient times. From the Han dynasty up until the Tang dynasty, what is now called Nantong was a minor county subordinate to Yangzhou. By AD 958, a city of sufficient importance had developed for a new, independent prefecture called Tongzhou ("Opening Prefecture", possibly from its position near the mouth of the Yangtze) to be created. The increasing wealth of Yangzhou caused Tongzhou to be once again eclipsed as an administrative center in 1368. When Tongzhou finally regained prefecture status in 1724, it was renamed Nantong ("Southern Tong") to avoid confusion with another Tongzhou, located near Beijing.

The prosperity of Nantong has traditionally depended on salt production on the nearby seacoast, rice and cotton agriculture, and especially the production of cotton textiles. A local statesman and industrialist named Zhang Jian founded Nantong's first modern cotton mills in 1899. He then developed an industrial complex that included flour, oil, and silk reeling mills, a distillery, and a machinery shop. He also founded a shipping line and reclaimed saline agricultural land to the east of Nantong for cotton production. Thanks to these efforts, by 1911 Nantong was commonly called "Zhang Jian's Kingdom". In the early Republican period, the Nantong Special Administrative District included Chongming County, now part of Shanghai.[2]

Although the city took a blow from the economic depression of the 1930s, as well as the Japanese occupation of the 1930s and 40s, Nantong has remained an important center for the textile industry. Because of its deep-water harbor and connections to inland navigational canals, it was one of 14 port cities opened to foreign investment in recent Chinese economic reforms.

Nantong has a humid subtropical climate (Köppen Cfa), with four distinct seasons. Winters are chilly and damp, and cold northwesterly winds caused by the Siberian high can force temperatures to fall below freezing at night although snowfall is relatively uncommon. Summers are hot and humid, and downpours or freak thunderstorms often occur. Monthly daily average temperatures range from 3.1 °C (37.6 °F) in January to 27.2 °C (81.0 °F) in July, and the annual mean is 15.33 °C (59.6 °F). With the plum rains in June and early July comes the rainiest part of the year.

These are further divided into 146 township-level divisions.

Nantong city and its six counties (or county-level cities) are rich in linguistic diversity, featuring both important Northern Wu varieties and highly divergent dialects of Mandarin (see Nantong dialect). People in the city of Nantong speak a unique dialect which sounds nothing like standard Mandarin or any other dialect, and it is also holds distinctive differences from surrounding dialects. About 2 million people in the southern parts of Tongzhou, Haimen, and Qidong speak the Wu dialect, which is often referred to as "Qi-hai Hua" (启海话), meaning Qidong-Haimen speech. It is about the same as the dialect spoken on the neighbouring island of Chongming, Shanghai. People in northern parts of these counties speak "Tongdong Hua" (tōngdōnghuà 通东话), meaning "Eastern Tong Talk". People in Rugao, Hai'an speak other dialects.

The Hao River, known as the Emerald Necklace of Nantong, surrounds the city with a total length of 15 km (9.3 mi). Most city scenery lines this river.[3] 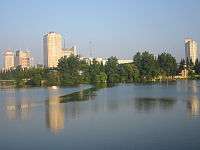 Popular tourist sites include Langshan ("Wolf hill"), which is around 110 meters high. On top of the hill is a Buddhist temple dedicated to a Song dynasty monk. Because of the monk's legendary powers over water demons, sailors pray to him for protection on their voyages.

The Cao Gong Zhu Memorial Temple commemorates a local hero who defended the city against Japanese pirates in 1557.

Shuihuiyuang Garden, meaning Water Garden, is unique of all Chinese classical gardens due its creation in the Hui style. It includes the tombs of several notable people, such as Luo Binwang, a famous poet of Tang Dynasty; Wen Tianxiang, the national hero of Nansong Dynasty; Zhangjian, the number one scholar of the late Qing Dynasty who was a modern industrialist and supporter of education. 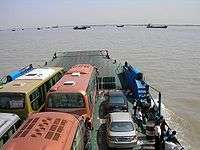 Ferry on Yangtze River near Nantong

Nantong was historically known as an agricultural area and a traditional site for salt-making. Its principal agricultural products include cotton, rice, wheat, fishing, fruit, and more. Currently, the city is making efforts to upgrade its farming sectors and increase production of organic foods.

Nantong is one of the 14 port cities opened to foreign investment projects under China's current policies of modernization. Nantong was traditionally an industrial city, especially around the turn of the 20th century, specializing in salt and cotton textile production. Today’s industrial corporations have made Nantong into an industrial hub since it opened its door to the outside world in the 1990s. With its excellent geographic location and the completion of two Yangtze River bridges, the prefecture is attracting more investment funding nationwide. Many of these investments come from international corporations. In October 2007, Singapore RGM International signed an agreement with Rudong, a county under Nantong's jurisdiction, to invest in a port project, costing 9 billion Yuan or 1.33 billion USD, at Rudong Yangkou Port. 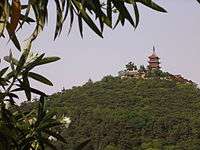 Today, Nantong is one of many fast-growing coastal cities in China. With the opening of Sutong Bridge in April 2008 and Chonghai Bridge in 2009, the city has been listed as the number one city in the Yangtze River Delta Economic Zone for foreign investment, surpassing its rivals Suzhou, Hangzhou and Nanjing.

As a sprawling metropolis, Nantong has experienced environment damage from its industrialization as well. The municipal government has been putting stiffer environmental policies into practice over the years and has spent tremendous amounts of money to curb pollution and plant more trees along its roads. The city is active in shutting down factories that do not meet its environment laws.

Nantong has developed rapidly in the last 25 years, as have most of the cities in the Yangtze River Delta. Nantong's rapid economic growth is generally attributed to its advantageous location just north of Shanghai. Nantong's Sutong Bridge is expected to further Nantong's integration with Shanghai, cutting transportation time between the cities down from three hours to one hour.[4]

The shipping corporation Cosco has a large port and ship repair yard on the river. Cosco (Nantong) Shipyard Co., Ltd, the first shipyard of the Cosco group, has placed itself adjacent to the busy port of Nantong. The yard has 1120 m of coastline and is equipped with one cape-size and one panamax size floating dock. Cosco Shipyard handles approximately 150 vessels per year.[5]

Nantong has many shopping malls, many with cinemas showing Chinese and western movies.

Some companies in Nantong:[6]

Established in 1984, Nantong Economic & Technological Development Area (NETDA) was one of the first state-level development zones approved by the Chinese Central Government and has been certified as an ISO 14000 National Demonstration Zone. The zone benefits from superior transportation facilities by both rail and road. NETDA has direct links to two railways: the Xinyi-Changxing Railway and the Nanjing-Qidong Railway. Su-Tong Yangtze River Bridge feeds into the center of NETDA and connects the Nanjing-Nantong and Yancheng-Nantong Expressways to the north, and Shanghai-Nanjing and Suzhou-Jiaxing-Hangzhou Expressways and Riverside Expressways to the south.

Established in 2009, STP is one of the key projects of Jiangsu Province coastal development. It’s also a joint-venture park between Suzhou and Nantong, linking them on either side of the Yangtze River. The intended area is 50 km2 (19 sq mi) and is to be developed in three phases. It claims the project as "An International Enterprise Park and Eco-friendly City in Yangtze Delta".

Nantong Export Processing Zone (NTEPZ) is situated in the Nantong Economic and Technological Development Area with a planned area of 2.98 km2 (1.15 sq mi). The Tong-Qi canal marks its western and northern boundaries, with Dongfang Avenue and Fuxin Road its eastern and southern boundaries respectively. NTPEZ is located at a communication hub, adjoining the main coastal artery of communications between north and south, close to the estuary of the Yangze River, only 8 kilometers to the Su(Suzhou)-Tong(Nangtong)Changjiang Bridge.[11]

Nantong Xingdong Airport, located in the town of Xingdong in Tongzhou District, 9.8 kilometers northeast of city center and 120 kilometers from Shanghai, serves Nantong and its neighboring areas. The construction of terminal 2 was completed in 2014, marking an important step towards serving international flights.[12]

Nantong has two bridges across the Yangtze to the south. The Chongming–Qidong Yangtze River Bridge, completed in 2011, carries the G40 Shanghai–Xi'an Expressway from Qidong to Chongming Island. The Sutong Yangtze River Bridge, which carries the G15 Shenyang–Haikou Expressway from Nantong to Changshu, was completed in 2008 and is one of the longest cable-stayed bridges in the world.

The Nanjing-Qidong (Ningqi) and Xinyi-Changxing (Xinchang) Railways intersect at Hai'an in the northwestern part of Nantong Prefecture.

Plans also exist for a cross-river connection from Nantong to the Shanghai metropolitan area (the Shanghai–Nantong Railway). It will connect to the Nanjing–Qidong Railway at Pingdong Station (平东站) on the northwestern outskirts of Nantong's urban core. Construction work has started in 2013 and expects to finish in 2019.[13] 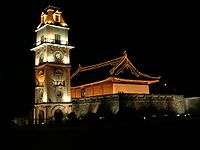 The bell tower in the campus of Nantong Middle School

Established in 1906, Nantong Social Welfare Institute was originally created by Zhang Jian as a house for orphans, the aged, and the disabled.

Located on the banks of the Haohe, the institute has an area of 13.2 mu (8,800 m²), with beautiful scenery and surroundings. At present, there are 79 staff members who care for around 170 orphans, widows, and handicapped children, plus 70 retirees. The current director's name is Jia Gui Lin.