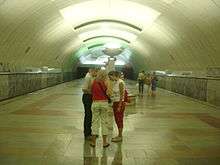 People gather on the platform at Dinamo, one of the stations in the Yekaterinburg Metro system

Yekaterinburg, formerly called Sverdlovsk, was always known as the informal capital of the Urals, a natural divide between Europe and Asia, between European Russia and Siberia. The city grew very rapidly because it was an important industrial centre and a transport hub. Plans for a rapid-transit system began in the late 1970s, and in 1980 construction began.

The city's uneven landscape, as well as its layout with a very dense city centre, prompted to combine deep and shallow stations. On 26 April 1991, the sixth Metro of Russia and the thirteenth and last Metro of the Soviet Union, which ceased to exist only a few months later, was finally opened to the public. The economic crisis of the early 1990s rocked the Metro very hard and the first stage encompassed only three stations. However, then Russian president Boris Yeltsin diverted state funds to complete its construction and by 1995 the Metro was doubled in length. Since then, only two extensions have been built.

The Metro is a typical Soviet design, which when completed will form a triangle from three lines intersecting in the city centre. The eight stations comprise 12.7 kilometres (7.9 mi) of length and are split between deep and shallow. Of the latter, four are pillar-trispans and one is a single vault (built to Kharkov technology). The deep-level stations include one pylon, one column and two Leningrad-technology single vaults, although one was built to a design making it appear as a single deck. Like all ex-Soviet Metros, the stations are elaborately decorated, although economic hardships prevented the full original designs from being implemented.

The Metro is served by one depot, Kalinovskoye, and 62 cars are assigned to it.

Plan of the Yekaterinburg Metro

The construction of the Bazhovskaya station which should be between the "Geologicheskaya" and "Chkalovskaya" has been postponed indefinitely.

The first section of the second line with length of 4.5 km should have four stations: "Metallurgicheskaya", "Tatishchyevskaya", "Ploshchad Kommunarov" and "Ploshchad 1905 Goda". Station "Tatishchyevskaya" and "Ploshchad Kommunarov" will be near Central Stadium, which will host the FIFA World Cup 2018 matches. The opening was originally planned in 2018. However, as of May 2013 was completed only pre-development, competition for the design itself was not yet declared, and therefore, the construction time again shifted, and by 2018 the opening is not realistic.[3]