The 2018 FIFA World Cup will be the 21st FIFA World Cup, a quadrennial international football tournament contested by the men's national teams of the member associations of FIFA. It is scheduled to take place in Russia from 14 June to 15 July 2018,[2] after the country was awarded the hosting rights on 2 December 2010. This will be the first World Cup ever held in Eastern Europe, and the first held in Europe since 2006.

The final tournament will involve 32 national teams, which include 31 teams determined through qualifying competitions and the automatically qualified host team. A total of 64 matches will be played in 12 venues located in 11 cities. The final will take place on 15 July in Moscow at the Luzhniki Stadium.[3][4][5]

The winners will qualify for the 2021 FIFA Confederations Cup.

Russian bid personnel celebrate the awarding of the 2018 World Cup to Russia.

The bidding procedure to host the 2018 and 2022 FIFA World Cups began in January 2009, and national associations had until 2 February 2009 to register their interest.[6] Initially, nine countries placed bids for the 2018 FIFA World Cup, but Mexico later withdrew from proceedings,[7] and Indonesia's bid was rejected by FIFA in February 2010 after the Indonesian government failed to submit a letter to support the bid.[8] During the bidding process, the three remaining non-UEFA nations (Australia, Japan, and the United States) gradually withdrew from the 2018 bids, and the UEFA nations were thus ruled out of the 2022 bid. As such, there were eventually four bids for the 2018 FIFA World Cup: England, Russia, Netherlands/Belgium, and Spain/Portugal.

The twenty-two-member FIFA Executive Committee convened in Zürich on 2 December 2010 to vote to select the hosts of both tournaments.[9] Russia won the right to be the 2018 host in the second round of voting. The Spain/Portugal bid came second, and that from Belgium/Netherlands third. England's bid to host its second tournament fell at the first hurdle.[10]

The voting results were as follows:[11] 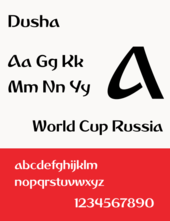 The typeface used for branding

The tournament logo was unveiled on 28 October 2014 by cosmonauts at the International Space Station and then projected onto Moscow's Bolshoi Theatre during an evening television programme. Russian Sports Minister Vitaly Mutko said that the logo was inspired by "Russia's rich artistic tradition and its history of bold achievement and innovation", and FIFA President Sepp Blatter stated that it reflected the "heart and soul" of the country.[12] For the branding, a typeface called Dusha (from Душа, Russian for soul) was created by Portuguese design agency Brandia Central in 2014.

The qualifying draw was held at the Konstantinovsky Palace.

Apart from Russia, who qualified automatically for the tournament as the hosts, all FIFA member associations were eligible to enter the qualification process.

Myanmar, having successfully appealed against a ban from the competition for crowd trouble during a 2014 World Cup qualifying tie against Oman, were obliged to play all their home matches outside the country.[13] On 12 March 2015, prior to the start of qualification, Zimbabwe were expelled from the tournament for failing to pay former coach José Claudinei.[14] Indonesia were suspended and then expelled before playing a single qualifying match, as part of punishment for government interference in the Football Association of Indonesia.[15]

The allocation of slots for each confederation was decided to be unchanged by the FIFA Executive Committee on 30 May 2015 in Zürich, after the FIFA Congress.[19][20]

On 13 May 2016, Gibraltar and Kosovo became FIFA members and eligible for the World Cup qualifying.[21][22]

In October 2013, UEFA President Michel Platini proposed that the World Cup finals should be expanded from 32 to 40 teams starting from 2018. The format would have been the same, but in groups of five instead of four.[24] This was in response to FIFA President Sepp Blatter's comments that Africa and Asia deserved more spots in the World Cup finals at the expense of European and South American teams.[25] However, FIFA general secretary Jérôme Valcke said that expansion in 2018 would be "unlikely", while Russian sports minister Vitaly Mutko said that the country was "preparing on the basis that 32 teams will be taking part."[26][27]

Russia proposed the following host cities: Kaliningrad, Kazan, Krasnodar, Moscow, Nizhny Novgorod, Rostov-on-Don, Saint Petersburg, Samara, Saransk, Sochi, Volgograd, Yaroslavl, and Yekaterinburg.[28] All the cities are in or just outside European Russia to reduce travel time for the teams in the huge country. The bid evaluation report stated: "The Russian bid proposes 13 host cities and 16 stadiums, thus exceeding FIFA's minimum requirement. Three of the 16 stadiums would be renovated, and 13 would be newly constructed."[29]

In October 2011 Russia decreased the number of stadiums from 16 to 14. Construction of the proposed Podolsk stadium in the Moscow region was cancelled by the regional government, and also in the capital, Otkrytiye Arena was competing with Dynamo Stadium over which would be constructed first.[30]

The final choice of host cities was announced on 29 September 2012. The number of cities was further reduced to 11 and number of stadiums to 12 as Krasnodar and Yaroslavl were dropped from the final list.[31]

Sepp Blatter stated in July 2014 that due to concerns over the completion of venues in Russia, the number of venues for the tournament may be reduced from 12 to 10. He also said, "We are not going to be in a situation, as is the case of one, two or even three stadiums in South Africa, where it is a problem of what you do with these stadiums".[32]

In October 2014, on their first official visit to Russia, FIFA's inspection committee and its head Chris Unger visited St Petersburg, Sochi, Kazan and both Moscow venues. They were satisfied with the progress.[33]

On 8 October 2015, FIFA and the Local Organising Committee agreed on the official names of the stadiums used during the tournament.[34]

The full schedule was announced by FIFA on 24 July 2015 (without kick-off times, which will be confirmed later).[37][38] Russia will be placed in position A1 in the group stage and play in the opening match at the Luzhniki Stadium in Moscow on 14 June, which will also host the second semi-final on 11 July and the final on 15 July. The Krestovsky Stadium in Saint Petersburg will host the first semi-final on 10 July and the third place match on 14 July.[19]

The top two teams of each group advance to the round of 16. The rankings of teams in each group are determined as follows (regulations Article 32.5):[39]

If two or more teams are equal on the basis of the above three criteria, their rankings are determined as follows:

All times listed are local time.

In the knockout stages, if a match is level at the end of normal playing time, extra time is played (two periods of 15 minutes each) and followed, if necessary, by a penalty shoot-out to determine the winner.[39]

As with the 2014 Winter Olympics, the choice of Russia as host has been challenged. Controversial issues have included the level of racism in Russian football,[40][41] and discrimination against LGBT people in wider Russian society.[42][43] Russia's involvement in the ongoing conflict in Ukraine has also caused calls by some US and UK politicians for the tournament to be moved, particularly following the annexation of Crimea.[44][45] FIFA President Sepp Blatter said: "The World Cup has been given and voted to Russia and we are going forward with our work".[46]

Allegations of corruption in the bidding processes for the 2018 and 2022 World Cups caused threats from England's FA to boycott the tournament.[47] FIFA appointed Michael J. Garcia, a US attorney, to investigate and produce a report (the Garcia Report) on the corruption allegations. Although the report was never published, FIFA released a 42-page summary of its findings as determined by German judge Hans-Joachim Eckert. Eckert's summary cleared Russia and Qatar of any wrongdoing, but was denounced by critics as a whitewash.[48] Garcia criticised the summary as being "materially incomplete" with "erroneous representations of the facts and conclusions", and appealed to FIFA's Appeal Committee.[49][50] The committee declined to hear his appeal, so Garcia resigned in protest of FIFA's conduct, citing a "lack of leadership" and lack of confidence in the independence of Eckert.[51]

On 3 June 2015, the FBI confirmed that the federal authorities were investigating the bidding and awarding processes for the 2018 and 2022 World Cups.[52][53] In an interview published on 7 June 2015, Domenico Scala, the head of FIFA's Audit And Compliance Committee, stated that "should there be evidence that the awards to Qatar and Russia came only because of bought votes, then the awards could be cancelled".[54][55]

Due to the financial crisis in the Russian economy, the budget for the preparations was cut a few times. In June 2015, a government decree cut the budget by $560 million, to a total of $11.8 billion.[56]

The general visa policy of Russia will not apply to the World Cup participants and fans, who will be able to visit Russia without a visa right before and during the competition regardless of their citizenship.[57]