For other uses, see Central Russia. 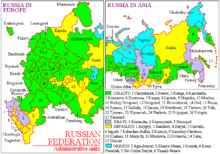 Russia in Europe and Asia (administrative division of 2002).

Russia is not proportionately populated between the smaller western portion (almost 25%) of the country that is considered part of Europe, and the larger eastern portion (more than 75%) that is part of Asia. European Russia contains about 77% of the country's population (110,000,000 people out of about 144,000,000) in an area comprising almost 4 million km2 (1.54 million mi2); an average of 27.5 persons per km2 (70 per mi2).[1]:6[1]:10 This territory makes up 38% of Europe. Its eastern border is defined by the Ural Mountains and in the south, it is defined by the border with Kazakhstan. This area includes Moscow and Saint Petersburg, the two largest cities in Russia. 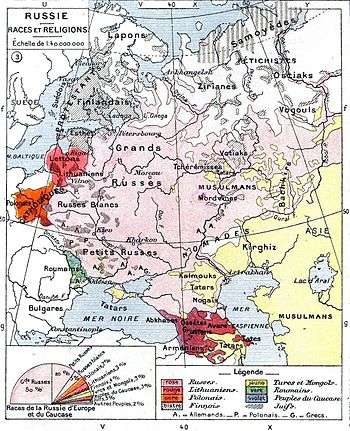 Ethnic map of European Russian Empire prior to the outbreak of the World War I.

The term “European Russia” was used in the Russian Empire to refer to traditional East Slavic territories under Russian control, including what is now Belarus and most of Ukraine (Dnieper Ukraine).

Administrative districts (on a large scale called Federal Districts) do not exactly line up with European Russia, but they are decent approximations, depending on exactly how Europe is defined. There are two major trends, one to use administrative divisions north of the terminus of the Ural River, and one to draw an imaginary line from the Ural River, through the city of Yekaterinburg. 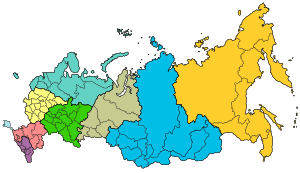