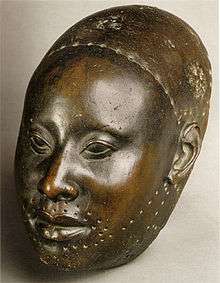 The Yoruba of West Africa (Benin, Nigeria and Togo, with migrant communities in parts of Ghana, and Sierra Leone) are responsible for one of the finest artistic traditions in Africa, a tradition that remains vital and influential today.[1]

Much of the art of the Yoruba, including staffs, court dress, and beadwork for crowns, is associated with the royal courts. The courts also commissioned numerous architectural objects such as veranda posts, gates, and doors that are embellished with carvings. Other Yoruba art is related shrines and masking traditions. The Yoruba worship a large pantheon of deities, and shrines dedicated to these gods are adorned with carvings and house and array of altar figures and other ritual paraphernalia. Masking traditions vary regionally, and a wide range of mask types are employed in various festivals and celebrations.[2]

Abundant natural resources enabled the Yoruba to develop one of the most complex cultures in sub-Saharan Africa. By the beginning of the second millennium CE, Ile-Ife, their most sacred city, had become a major urban center with highly sophisticated religious, social, and political institutions.[3]

In the period around 1300 C.E. the artists at Ife developed a refined and naturalistic sculptural tradition in terracotta, stone and copper alloy - copper, brass, and bronze many of which appear to have been created under the patronage of King Obalufon II, the man who today is identified as the Yoruba patron deity of brass casting, weaving and regalia.[4] The dynasty of kings at Ife, which regarded the Yoruba as the place of origin of human civilization, remains intact to this day.

There have been a series of Yoruba kingdoms over the past nine centuries. Ife was one of the earliest of these; Oyo was also early and the Owa kingdom in the southwest maintained close ties to Oyo. Ife also experienced the artistic and cultural influence of Benin dating back to the 14th Century or earlier. Owa artists supplied fine ivory work to the court at Benin and Owa royalty adapted and transformed many Benin institutions and the regalia of leadership.

Yoruba kingdoms prospered until the slave trade and warfare of the nineteenth century took their toll. One of the effects of this devastation was the dispersal of millions of Yoruba all over the world. This resulted in a strong Yoruba character in the artistic, religious and social lives of Africans in the New World.[1]

Art and life in Yoruba culture

The custom of art and artists among the Yoruba is deeply rooted in the Ifá literary corpus, indicating the orishas Ogun, Obatala, Oshun and Obalufon as central to creation mythology including artistry (i.e. the art of humanity).

In order to fully understand the centrality of art (onà) in Yoruba thought, one must be aware of their cosmology, which traces the origin of existence (ìwà) to a Supreme Divinity called Olódùmarè, the generator of ase, the enabling power that sustains and transforms the universe. To the Yoruba, art began when Olódùmarè commissioned the artist deity Obatala to mold the first human image from clay. Today, it is customary for the Yoruba to wish pregnant women good luck with the greeting: May Obatala fashion for us a good work of art.[3]

The concept of ase influences how many of the Yoruba arts are composed. In the visual arts, a design may be segmented or seriate- a "discontinuous aggregate in which the units of the whole are discrete and share equal value with the other units."[5] Such elements can be seen in Ifa trays and bowls, veranda posts, carved doors, and ancestral masks.

The importance of the head in Yoruba sculpture 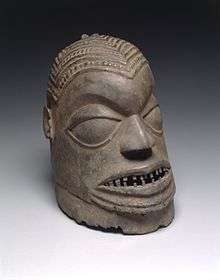 Yoruba Helmet Mask (Igbudu) made from wood, metal and pigment from the 19th century Brooklyn Museum

The Yoruba people regard the human head (ori) as the most important part of a person. Likewise, the head is the most prominent part of Yoruba sculpture. An analysis of Yoruba ontology reveals that the Yoruba regard the head as the locus of the ase of Olodumare. Therefore, the head constitutes a person's life-source and controlling personality and destiny. Babatunde Lawal identifies three different modes of representing the head in Yoruba sculpture: "the naturalistic, which refers to the external, or physical head (ori ode); the stylized, which hints at the inner, or spiritual, head (ori inu); and the abstract, which symbolizes the primeval material (oke ipori) of which the inner head was made."[6]

Anonymity and authorship in African art

The issue of anonymity and authorship has long troubled the field of African art history, particularly as it relates to the political disparities between Africa and the West.[7] Such information was, at least initially, rarely sought in the field and deemed unnecessary and even undesirable by many collectors.[2] Susan Vogel has identified a further paradox. "[I]n their own societies," Vogel writes, "African artists are known and even famous, but their names are rarely preserved in connection with specific works... More often than not, the African sculptor becomes virtually irrelevant to the life of the art object once his work is complete... Cultures preserve the information they value."[8]

The problem of anonymity in Yoruba art in particular is troubling in the context of Yoruba culture where "it is absolutely imperative for individuals to acknowledge each other's identity and presence from moment to moment, [and where] there is a special greeting for every occasion and each time of day."[9]

Several Yoruba artists' names are known, including but not limited to:

Yoruban blacksmiths create sculpture from iron, through hand-beating, welding, and casting. Ogun is honored as the god of iron.[10]

Metalworkers also create brass sculptures by lost-wax casting. Brass is seen as being incorruptible by the Ogboni Society.[10]

The tendency in many African cosmologies to identify the body as a vehicle incarnating the soul on earth has encouraged the metaphoric use of the masquerade for a similar purpose. Egúngún, Gelede,and Epa are among the many types of Masquerade practiced by the Yoruba. 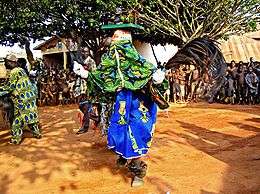 For the full article on Yoruba Crowns see Oba's crown

The bead-embroidered crown (or ade, in local language) with beaded veil, foremost attribute of the Oba, symbolizes the aspirations of a civilization at the highest level of authority. In his seminal article on the topic, Robert F. Thompson writes, "The crown incarnates the intuition of royal ancestral force, the revelation of great moral insight in the person of the king, and the glitter of aesthetic experience."[11]

There is also a vibrant form of customary theatre known as Alarinjo that has its roots in the medieval period and that has given much to the contemporary Nigerian film industry.

Esiẹ Museum is a museum in Esiẹ, Irepodun, Kwara state. The museum was the first to be established in Nigeria when it opened in 1945. The museum once housed over one thousand tombstone figures or images representing human beings. It is reputed to have the largest collection of soapstone images in the world.[12] In modern times the Esie museum has been the center of religious activities and hosts a festival in the month of April every year.