A performer at the 2006 Yosakoi Festival in Harajuku, Japan

Two performers at the 2006 Yosakoi Festival in Harajuku, Japan

A performer at the 2008 Yosakoi Festival in Harajuku, Japan 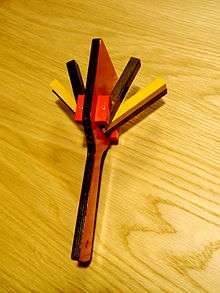 A naruko (bird rattle) showing its range of movement 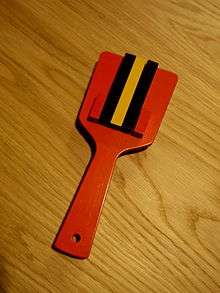 Yosakoi (よさこい) is a unique style of dance that originated in Japan and are danced at festivals and events all over the country. The first Yosakoi festival was held in 1954 in Kochi. Yosakoi-style dancing has spread throughout much of Japan. The style of dance is highly energetic, combining traditional Japanese dance movements with modern music. The choreographed dances are often performed by large teams. Along with a number of professional yosakoi schools and town dance teams, yosakoi is also a popular event during the sports festivals held by Japanese elementary, junior, and senior high schools. Yosakoi participants include men and women of almost all ages – sometimes within a single team.

(video) A group of yosakoi dancers dancing down a street, with naruko clappers and large flags waving

The costumes used by yosakoi teams vary widely. Happi coats and yukata are the most predominant costumes and can be seen in a wide variety of colors. However, some groups choose costumes that are based on historical attire, popular fashions, or ethnic fashions. Typically, all members of a team wear similar costumes.

One of the defining aspects of yosakoi dance is the use of naruko: small wooden clappers that are held in the hands of each dancer. Naruko were originally used in Kōchi Prefecture to scare birds away from rice fields. The traditional naruko has black and yellow beaters on a wooden body, but most modern yosakoi groups create their own naruko, choosing colors and materials that match their costumes. The use of naruko is required in yosakoi dance, but many groups also use other hand-held instruments or props, such as drums, other percussion instruments, flags, batons, and floats.

The official yosakoi dance is based on a song called "Yosakoi Naruko Dancing", written by Takemasa Eisaku. This song was created by combining elements of three songs: "Yosakoi-bushi" ("yosakoi melody"), "Yocchore" (a children's song), and "Jinma-mo" (a folk song of Kōchi Prefecture). The original competition in Kōchi requires that each team's music include some part of this original music. Competitions and festivals in other areas may not have this requirement (thus allowing teams to compose their own music), or may require that elements of different local folk songs are worked into the dance routines. Takemasa has given the copyright on "Yosakoi Naruko Dancing" to the public.

Yosakoi Matsuri ("yosakoi festival") is a festival in the city of Kōchi, Japan. This is the original yosakoi festival: it has taken place every August since 1954. In this festival, teams of dancers and floats crowd to dance the yosakoi naruko dance together. The number of participants has been increasing yearly: as of 2005 over 10,000 dancers participate in this competition every year.

The rules of the Kōchi yosakoi competition are as follows: 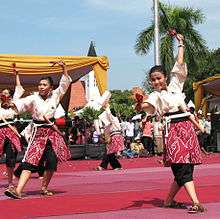 Since its introduction in 1954, yosakoi has become popular throughout the country of Japan. Yosakoi-Soran festivals are now held all over Japan throughout the year. They vary in size from small villages hosting a few teams of dancers in conjunction with another annual festival, to large cities like Sendai, which hosts the Michinoku Yosakoi Festival, the third largest festival in Japan.

As of 2005, there were yosakoi festivals and competitions in over 200 locations.

An example of yosakoi dancing can be seen in the feature film The Harimaya Bridge, which was filmed in Kōchi Prefecture. The 2011 manga series, Hanayamata, which received an anime adaptation in July 2014, also focuses on yosakoi.

Yosakoi is performed in Penang, Malaysia every year in July by local enthusiasts called the Pink Hibiscus Yosakoi Dancers, as well as in Accra, Ghana as an annual celebration to strengthen ties between Japan and Ghana.

In Vietnam, yosakoi is performed annually in Japan Sakura Matsuri which is usually held in April in Hanoi by Japan Foundation Vietnam (JPF) to introduce Japanese culture. This festival showed over 10 enthusiastic Yosakoi teams of Vietnam and guest teams from Japan. Yosakoi also appears in anime-manga-cosplay events in large cities such as Hanoi, Ho Chi Minh City and Haiphong. In the Harajuku Omotesando Super Yosakoi Festival every year, Vietnam contributes one team and this number may rise in the future.

There are also yosakoi teams at universities outside Japan, such as UC Berkeley,[3] Kansas State University.,[4] Minnesota State University Moorhead, and in New York City "Yosakoi Dance Project - 10tecomai".[5] In Canada, a team called Sakuramai performs locally at cultural events and fairs in Toronto and Montreal.

In Europe, one can learn and dance Yosakoi in the Netherlands, France or Sweden.[6] Formed by the students of Leiden University, the Dutch team Raiden performs yosakoi in various Japan-related activities such as the yearly Japanmarkt, anime conventions and cultural events. Its French counterpart was created back in 2010 and perform in several festivals, including the International Fair of Bordeaux[7]. The Swedish team Zyka Yosakoi also performs at local Japan-related events or gatherings.