Putrajaya (/pʊtrɑːdʒɑːjə/), officially the Federal Territory of Putrajaya, is a planned city and the federal administrative centre of Malaysia. The seat of government was shifted in 1999 from Kuala Lumpur to Putrajaya, because of overcrowding and congestion in the former. Kuala Lumpur remains Malaysia's national capital, and is the seat of the King and Parliament as well as the home of the country's commercial and financial centre. Putrajaya was the brainchild of former Prime Minister Tun Dr Mahathir Mohammad. In 2001, Putrajaya became Malaysia's third Federal Territory after Kuala Lumpur and Labuan.

Named after the first Malaysian Prime Minister, Tunku Abdul Rahman Putra, the territory is entirely enclaved within the Sepang District of the state of Selangor. Putrajaya is also a part of MSC Malaysia, a special economic zone that covers Klang Valley. In Sanskrit, "putra" means "prince" or "male child", and "jaya" means "success" or "victory". The development of Putrajaya started in early 1990s, and today major landmarks have been completed and the population is expected to grow in the near future. 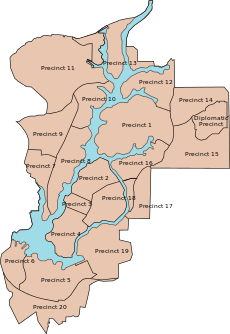 Putrajaya used to be Prang Besar ('ڤراڠ بسر), and was founded in 1918 as Air Hitam by the British. Its land area of 800 acres (3.2 km2) d expanded to 8,000 acres (32 km2), and it was merged with surrounding estates, including Estet Raja Alang, Estet Galloway and Estet Bukit Prang.

The vision to have a new Federal Government Administrative Centre to replace Kuala Lumpur as the administrative capital emerged in the late 1980s, during the tenure of Malaysia's 4th Prime Minister, Dr. Mahathir Bin Mohamad. The new city was proposed to be located between Kuala Lumpur and the new Kuala Lumpur International Airport (KLIA). Two areas were proposed: Prang Besar and Janda Baik of Pahang.[3]

The Federal government negotiated with the state of Selangor on the prospect of another Federal Territory and in the mid-1990s, the Federal government paid a substantial amount of money to Selangor for approximately 11,320 acres (45.8 km2) of land in Prang Besar, Selangor. As a result of this land purchase, the state of Selangor now completely surrounds two Federal Territories within its borders, namely Kuala Lumpur and Putrajaya.

Planned as a garden and intelligent city, 38% of the area is reserved for green spaces by emphasising the enhancement of natural landscape. A network of open spaces and wide boulevards were incorporated to the plan. Construction began in August 1995 and it was Malaysia's biggest project and one of Southeast Asia's largest with estimated final cost of US$8.1 billion. The entire project was designed and constructed by Malaysian companies with only 10% of the materials imported.

The Asian Financial Crisis of 1997/1998 had somewhat slowed the development of Putrajaya. In 1999, 300 staff members of the Prime Minister's office moved to Putrajaya and the remaining government servants moved in 2005. On 1 February 2001 Tun Dr. Mahathir declared Putrajaya as a Federal Territory with the ceremony of handing over Putrajaya township from the Selangor state authorities.

In 2002, a rail link called KLIA Transit was opened, linking Putrajaya to KLIA in Sepang. However, construction of the Putrajaya Monorail which was intended to be the city's metro system, was suspended due to costs. One of the monorail suspension bridges in Putrajaya remains unused.

In April 2013 the Putrajaya government signed a letter of intent (LOI) with the government of Sejong City in South Korea to mark co-operation between the two cities.[4] 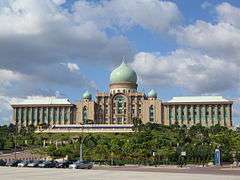 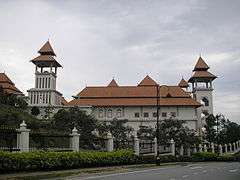 Primary & Secondary Education in Putrajaya is provided by a few schools such as:

There is also two elites fully residential school in Putrajaya

Putrajaya is home to the world's largest roundabout, the Persiaran Sultan Salahuddin Abdul Aziz Shah with a perimeter of 3.5 km. (2.7 miles)

Putrajaya is surrounded by federal highways 29 on the western side and 30 on the eastern side. The South Klang Valley Expressway E26, connecting Pulau Indah to Kajang, runs through the northern end of Putrajaya. ELITE E6 exit 607 serves Putrajaya and Cyberjaya next door. Highway 29 interchanges with Damansara-Puchong Expressway (LDP) E11 in the northwestern corner of Putrajaya, linking the city with Puchong, Subang Jaya, Kelana Jaya and all the way to Kepong.

Within Putrajaya, the following roads serve as the main thoroughfares of the city.

Being a new planned city, Putrajaya is not served by state railway company KTMB. The nearest KTM stations will be in Serdang, Kajang, Universiti Kebangsaan Malaysia or Bangi. RapidKL buses link Putrajaya to the Serdang KTM station.

The only rail line serving Putrajaya is the KLIA Express/ERL, with a station serving both Putrajaya and Cyberjaya.

Putrajaya is represented in the Dewan Rakyat of the Malaysian Parliament by Tengku Adnan Tengku Mansor of UMNO, part of the Barisan Nasional ruling coalition. Tengku Adnan is also the Minister of Federal Territories.[9]

Being a Federal Territory, Putrajaya does not have a state assembly, and the constituency is not divided into any state seats.

Panoramic image of Putrajaya, (from left to right) the Putra Bridge, the Ministry of Finance on the left, the Seri Wawasan Bridge, the Istana Darul Ehsan next to it

Panorama of Putrajaya from Cyberjaya Lake Gardens in February 2011.