Main article: Pollination syndrome
Not to be confused with Zoophilia. 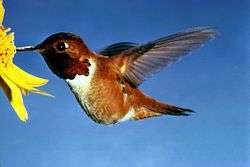 A Rufous Hummingbird (Selasphorus rufus) is attracted to brightly colored flowers and assists the pollination of the plant.

Zoophily is a form of pollination whereby pollen is transferred by vertebrates, particularly by hummingbirds and other birds, and bats, but also by monkeys, marsupials, lemurs, bears, rabbits, deer, rodents, lizards and other animals. Zoomophilous species, like entomophilous species, frequently evolve mechanisms to make themselves more appealing to the particular type of pollinator, e.g. brightly colored or scented flowers, nectar, and appealing shapes and patterns. These plant animal relationships are often mutually beneficial because of the food source provided in exchange for pollination. Zoophilous species include Arctium, Acaena, and Galium aparine' Pollination is defined as the transfer of pollen from the anther to the stigma (Worldnet). There are many vectors for pollination, including abiotic (wind and water), and biotic (animal). There are different benefits and costs associated with any vector type. For instance, using animal pollination is beneficial because the process is more directed and often results in pollination. At the same time it is costly for the plant to produce rewards, such as nectar, to attract animal pollinators. Not producing such rewards is one benefit of using abiotic pollinators, but a cost associated with this approach is that the pollen may be distributed somewhat randomly. In general, pollination by vertebrates occurs when the animal reaches inside the flowers for nectar. While feeding on the nectar, the animal rubs or touches the stamens and is covered in pollen. Some of this pollen will be deposited on the stigma of the next flower it visits, pollinating the flower (Missouri Botanical Garden 2006).

Bat pollination is chiropterophily. Most bat species that pollinate flowers inhabit Africa, Southeast Asia, and the Pacific Islands, although bat pollination occurs over a geographically wide range. Many flowers are dependent on bats for pollination, such as the flowers which produce mangoes, bananas, and guavas (Celebrating Wildlife 2006). Bat pollination is an integral process in tropical communities with 500 tropical plant species completely, or partially, dependent on bats for pollination (Heithaus 1974). Also, it has been noted that outcrossing (introducing unrelated genetic material into a breeding line) by bats increases genetic diversity and is important in tropical communities (Heithaus 1974).

Plants pollinated by bats often have white or pale nocturnal flowers that are large and bell shaped. Many of these flowers have large amounts of nectar, and emit a smell that attracts bats, such as a strong fruity or musky odor (Gibson 2001). Bats use certain chemical cues to locate food sources. They are attracted to odors that contain esters, alcohols, aldehydes, and aliphatic acids (Gibson 2001).

The banana bat (Musonycteris harrisoni) is a nectarivorous species found only on the Pacific coast of Mexico. It has a very small geographic range and is distinguishable by its extremely long nose. The long snout and tongue, one tongue recorded as measuring 76mm, allows this bat to feed on the nectar of long tubular flowers. This bat species is small, with the head and body length ranging from 70 to 79mm. The wild banana flower is elongated with a purple color (Tellez 1999).

Pollination by other mammals

Non-flying mammals (to distinguish them from bats) have been found to feed on the nectar of several species of plant. Though some of these mammals are pollinators, others do not carry or transfer enough pollen to be considered pollinators (Johnson 2001). This group of non-flying pollinators is mainly composed of marsupials, primates, and rodents (Johnson 2001). Well-documented studies of non-flying mammal pollination now involve at least 59 species of mammal distributed among 19 families and six orders (Carthewa 1997). As of 1997, there were 85 species of plants from 43 genera and 19 families which were visited by these mammals (Carthewa 1997). In many cases, a plant species is visited by a range of mammals. Two examples of multiple mammal pollination are the genus Quararibea which is visited by 12 species and Combretum which is visited by 8 (Carthewa 1997).

Plant species that feed non-flying mammals will often exhibit similar characteristics to aid in pollination. The flowers are often large and sturdy, or are grouped together as multi-flowered inflorescences. Many non-flying mammals are nocturnal and have an acute sense of smell, so the plants tend not to have bright showy colors, but instead excrete a pungent odor. Plants will often flower profusely and produce a large amount of sugar-rich nectar. These plants also tend to produce large amounts of pollen because mammals are larger than some other pollinators, and lack the precision smaller pollinators can achieve (Carthewa 1997). Animals with more precision, such as bees or other insects with a proboscis, can pollinate small flowers with less pollen necessary. This means that a plant will require more pollen for a larger mammal pollinator.

One example of a symbiotic relationship between a plant and its animal pollinators is the African Lily, Massonia depressa, and some rodent species of the Succulent Karoo region of South Africa. At least four rodent species, including two gerbil species, were found to be visiting M. depressa during the night (Johnson 2001). Traits of the M. depressa flowers support non-flying mammal pollination. It has dull-colored and very sturdy flowers at ground level, has a strong yeasty odor, and secretes copious amounts of sucrose-dominant nectar during the night (Johnson 2001). The nectar of M. depressa was also found to be 400 times as viscous, or resistant to flow, as an equivalent sugar solution. This jelly-like consistency of the nectar may discourage insect consumption while also facilitating lapping by rodents. It is assumed that M. depressa coevolved with its pollinators (Johnson 2001).

The term ornithophily is used to describe pollination specifically by birds. Hummingbirds, found only in North and South America, are the most recognized nectar-eating bird, but there are many other bird species throughout the world that are also important pollinators. These include: sunbirds, honeyeaters, flowerpeckers, honeycreepers, and bananaquits (University of Connecticut 2006).

Plants pollinated by birds often have brightly colored diurnal flowers that are red, yellow, or orange, but no odor because birds have a poor sense of smell. Other characteristics of these plants are that they have suitable, sturdy places for perching, abundant nectar that is deeply nested within the flower. Often flowers are elongated or tube shaped. Also, many plants have anthers placed in the flower so that pollen rubs against the birds head/back as the bird reaches in for nectar (Celebrating Wildlife 2006).

The ruby-throated hummingbird (Archilochus colubris) is one of many species of hummingbirds. Found in North and Central America, this bird is an important pollinator for a variety of plant species. Some species, such as the trumpet creeper, are adapted specifically for ruby-throated hummingbirds (Harris 2000). This species is quite small, measuring 7.5-9.0 cm long and weighing only 3.4-3.8g. The long narrow bill of the hummingbird is the perfect tool for extracting nectar from elongated flowers (Harris 2000). This species is attracted to brightly colored flowers, especially those that are red in color (Harris 2000).

Although lizard pollination has historically been underestimated, recent studies have shown lizard pollination to be an important part of many plant species’ survival. Not only do lizards show mutualistic relationships, but these are found to occur most often on islands. This pattern of lizard pollination on islands is mainly due to their high densities, a surplus of floral food, and a relatively low predation risk when compared to lizards on the mainland (Olesen 2003).

The lizard Hoplodactylus is only attracted by nectar on flowers, not pollen. This means flowers pollinated by this species must produce copious nectar as a reward for Hoplodactylus. Scented flowers are another important adaptation to attract lizards due to their acute sense of smell. Although lizards have the ability to distinguish colors, as nocturnal feeders, it is more difficult to see bright colors. Because Hoplodactylus feeds nocturnally, it is sometimes less important for flowers to allocate resources to showy inflorescences. Flowers must also be robust enough to support the weight of the pollinator while feeding (Whitaker 1987).

In New Zealand, Hoplodactylus geckos visit flowers of many native plant species for nectar and pollen. The flowers of Metrosideros excelsa are pollinated by more than 50 types of gecko as well as birds and bees. Of the geckos visiting this species, two-thirds of them carried large amounts of pollen, suggesting a main role in pollination. However, after the arrival of humans in New Zealand, lizard populations have declined making it more difficult to witness lizard pollination (Olesen 2003).