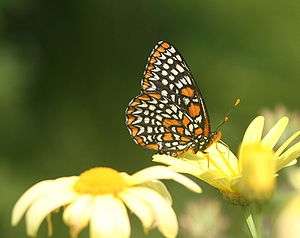 Pollination syndromes are suites of flower traits that have evolved in response to natural selection imposed by different pollen vectors, which can be abiotic (wind and water) or biotic, such as birds, bees, flies, and so forth.[1][2] These traits include flower shape, size, colour, odour, reward type and amount, nectar composition, timing of flowering, etc. For example, tubular red flowers with copious nectar often attract birds; foul smelling flowers attract carrion flies or beetles, etc.

The "classical" pollination syndromes as they are currently defined (see below) were developed in the 19th century by the Italian botanist Federico Delpino. Although they have been useful in developing our understanding of plant-pollinator interactions, an uncritical acceptance of pollination syndromes as providing a framework for classifying these relationships is rather out of date.[3]

These do not attract animal pollinators. Nevertheless, they often have suites of shared traits. 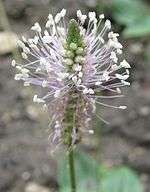 Flowers may be small and inconspicuous, as well as green and not showy. They produce enormous numbers of relatively small pollen grains (hence wind-pollinated plants may be allergens, but seldom are animal-pollinated plants allergenic). Their stigmas may be large and feathery to catch the pollen grains. Insects may visit them to collect pollen; in some cases, these are ineffective pollinators and exert little natural selection on the flowers, but there are also examples of ambophilous flowers which are both wind and insect pollinated. Anemophilous, or wind pollinated flowers, are usually small and inconspicuous, and do not possess a scent or produce nectar. The anthers may produce a large number of pollen grains, while the stamens are generally long and protrude out of flower.

Water-pollinated plants are aquatic and pollen is released into the water. Water currents therefore act as a pollen vector in a similar way to wind currents. Their flowers tend to be small and inconspicuous with lots of pollen grains and large, feathery stigmas to catch the pollen. However, this is relatively uncommon (only 2% of pollination is hydrophily) and most aquatic plants are insect-pollinated, with flowers that emerge into the air. Vallisneria is an example. 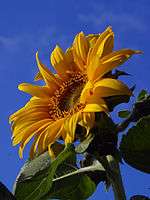 Sunflower pollinated by butterflies and bees

Bee-pollinated flowers can be very variable in their size, shape and colouration. They can be open and bowl-shaped (radially symmetrical) or more complex and non-radially symmetric ("zygomorphic"), as is the case with many peas and foxgloves.

Some bee flowers tend to be yellow or blue, often with ultraviolet nectar guides and scent. Nectar, pollen, or both are offered as rewards in varying amounts. The sugar in the nectar tends to be sucrose-dominated. A few bees collect oil from special glands on the flower.[4]

There are diverse types of bees (such as honeybees, bumblebees, and orchid bees), forming large groups that are quite distinctive in size, tongue length and behaviour (some solitary, some colonial); thus generalization about bees is difficult.[5] Some plants can only be pollinated by bees because their anthers release pollen internally, and it must be shaken out by buzz pollination (also known as "sonication"). Bees are the only animals that perform this behaviour. Bumblebees sonicate, but honeybees do not.

Wasps are also responsible for the pollination of several plants species, being important pollen vectors, and in some cases, even more efficient pollinators than bees.[6]

Butterfly-pollinated flowers tend to be large and showy, pink or lavender in colour, frequently have a landing area, and are usually scented. Since butterflies do not digest pollen (with one exception), more nectar is offered than pollen. The flowers have simple nectar guides with the nectaries usually hidden in narrow tubes or spurs, reached by the long tongue of the butterflies. 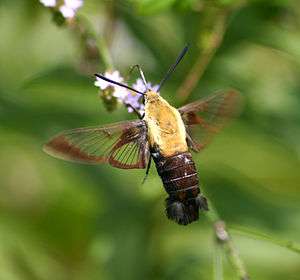 Among the more important moth pollinators are the hawk moths (Sphingidae). Their behaviour is similar to hummingbirds: they hover in front of flowers with rapid wingbeats. Most are nocturnal or crepuscular. So moth-pollinated flowers tend to be white, night-opening, large and showy with tubular corollas and a strong, sweet scent produced in the evening, night or early morning. A lot of nectar is produced to fuel the high metabolic rates needed to power their flight.

Other moths (Noctuids, Geometrids, Pyralids, for example) fly slowly and settle on the flower. They do not require as much nectar as the fast-flying hawk moths, and the flowers tend to be small (though they may be aggregated in heads).[7] 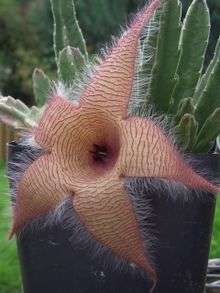 Flies tend to be important pollinators in high-altitude and high-latitude systems, where they are numerous and other insect groups may be lacking.[8] There are two main types of fly pollination: myophily and sapromyophily.

Myophily includes flies that feed on nectar and pollen as adults - particularly bee flies (Bombyliidae), hoverflies (Syrphidae), and others - and these regularly visit flowers. In contrast, male fruit flies (Tephritidae) are enticed by specific floral attractants emitted by some wild orchids which do not produce nectar.[9][10] Chemicals emitted by the orchid act as the fly's sex pheromone precursor or booster. Myophilous plants tend not to emit a strong scent, are typically purple, violet, blue, and white, and have open dishes or tubes.[11]

Sapromyophiles, on the other hand, normally visit dead animals or dung. They are attracted to flowers which mimic the odor of such objects. The plant provides them with no reward and they leave quickly unless it has traps to slow them down. Such plants are far less common than myophilous ones.[12]

Although hummingbirds are the most familiar nectar-feeding birds for North Americans, there are analogous species in other parts of the world: sunbirds, honeyeaters, flowerpeckers, honeycreepers, bananaquits, flowerpiercers, lories and lorikeets.[13] Hummingbirds are the oldest group, with the greatest degree of specialization on nectar.[13] Flowers attractive to hummingbirds that can hover in front of the flower tend to be large red or orange tubes with a lot of dilute nectar, secreted during the day. Since birds do not have a strong response to scent, they tend to be odorless. Perching birds need a substantial landing platform, so sunbirds, honeyeaters, and the like are less associated with tubular flowers.

Bat-pollinated flowers tend to be large and showy, white or light coloured, open at night and have strong odours. They are often large and bell-shaped. Bats drink the nectar, and these plants typically offer nectar for extended periods of time. Sight, smell, and echo-location are used to initially find the flowers, and excellent spatial memory is used to visit them repeatedly.[14] In fact, bats can identify nectar-producing flowers using echolocation.[14] In the New World, bat pollinated flowers often have sulfur-scented compounds, but this does not carry to other parts of the world.[15] Bat-pollinated plants have bigger pollen than their relatives.[16]

Beetle-pollinated flowers are usually large, greenish or off-white in color and heavily scented. Scents may be spicy, fruity, or similar to decaying organic material. Most beetle-pollinated flowers are flattened or dish shaped, with pollen easily accessible, although they may include traps to keep the beetle longer. The plant's ovaries are usually well protected from the biting mouthparts of their pollinators.[17] Beetles may be particularly important in some parts of the world such as semi-arid areas of southern Africa and southern California[18] and the montane grasslands of KwaZulu-Natal in South Africa.[19]

Pollination syndromes reflect convergent evolution towards forms (phenotypes) that limit the number of species of pollinators visiting the plant.[5] They increase the functional specialization of the plant with regard to pollination, though this may not affect the ecological specialization (i.e. the number of species of pollinators within that functional group).[20] They are responses to common selection pressures exerted by shared pollinators or abiotic pollen vectors, which generate correlations among traits. That is, if two distantly related plant species are both pollinated by nocturnal moths, for example, their flowers will converge on a form which is recognised by the moths (e.g. pale colour, sweet scent, nectar released at the base of a long tube, night-flowering).

These honeybees selectively visit flowers from only one species for a period of time, as can be seen by the colour of the pollen in their baskets:

Pollinators fluctuate in abundance and activity independently of their plants,[20][25] and any one species may fail to pollinate a plant in a particular year. Thus a plant may be at an advantage if it attracts several species or types of pollinators, ensuring pollen transfer every year.[26] Many species of plants have the back-up option of self-pollination, if they are not self-incompatible.

Criticisms of the syndromes

Whilst it is clear that pollination syndromes can be observed in nature, there has been much debate amongst scientists as to how frequent they are and to what extent we can use the classical syndromes to classify plant-pollinator interactions.[27] Although some species of plants are visited only by one type of animal (i.e. they are functionally specialized), many plant species are visited by very different pollinators.[26][28] For example, a flower may be pollinated by bees, butterflies, and birds. Strict specialization of plants relying on one species of pollinator is relatively rare, probably because it can result in variable reproductive success across years as pollinator populations vary significantly.[26] In such cases, plants should generalize on a wide range of pollinators, and such ecological generalization is frequently found in nature. A study in Tasmania found the syndromes did not usefully predict the pollinators.[29]

This debate has led to a critical re-evaluation of the syndromes, which suggests that on average about one third of the flowering plants can be classified into the classical syndromes.[3] This reflects the fact that nature is much less predictable and straightforward than 19th Century biologists originally thought. Pollination syndromes can be thought of as extremes of a continuum of greater or lesser specialization or generalization onto particular functional groups of pollinators that exert similar selective pressures"[5] and the frequency with which flowers conform to the expectations of the pollination syndromes is relatively rare. In addition, new types of plant-pollinator interaction, involving "unusual" pollinating animals are regularly being discovered, such as specialized pollination by spider hunting wasps (Pompilidae) and fruit chafers (Cetoniidae) in the eastern grasslands of South Africa.[19] These plants do not fit into the classical syndromes, though they may show evidence of convergent evolution in their own right.

An analysis of flower traits and visitation in 49 species in the plant genus Penstemon found that it was possible to separate bird- and bee- pollinated species quite well, but only by using floral traits which were not considered in the classical accounts of syndromes, such as the details of anther opening.[30] Although a recent review concluded that there is "overwhelming evidence that functional groups exert different selection pressures on floral traits",[5] the sheer complexity and subtlety of plant-pollinator interactions (and the growing recognition that non-pollinating organisms such as seed predators can affect the evolution of flower traits) means that this debate is likely to continue for some time.