Not to be confused with Rodina and Rhodinia.
For the genus of metalmark butterflies, see Rodinia (butterfly). 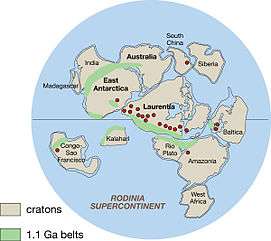 Rodinia (from the Russian "Родина", ródina, meaning "The Motherland")[2] is a Neoproterozoic supercontinent that was assembled 1.3–0.9 billion years ago and broke up 750–600 million years ago.[3] Valentine & Moores 1970 were probably the first to recognise a Precambrian supercontinent, which they named 'Pangaea I'.[4] It was renamed 'Rodinia' by McMenamin & McMenamin 1990 who also were the first to produce a reconstruction and propose a temporal framework for the supercontinent.[5]

Rodinia formed at c. 1.0 Ga by accretion and collision of fragments produced by breakup of an older supercontinent, Columbia, assembled by global-scale 2.0–1.8 Ga collisional events.[6]

Rodinia broke up in the Neoproterozoic with its continental fragments reassembled to form Pannotia 600–550 million years ago. In contrast with Pannotia, little is known yet about the exact configuration and geodynamic history of Rodinia. Paleomagnetic evidence provides some clues to the paleolatitude of individual pieces of the Earth's crust, but not to their longitude, which geologists have pieced together by comparing similar geologic features, often now widely dispersed.

The extreme cooling of the global climate around 700 million years ago (the so-called Snowball Earth of the Cryogenian Period) and the rapid evolution of primitive life during the subsequent Ediacaran and Cambrian periods are thought to have been triggered by the breaking up of Rodinia or to a slowing down of tectonic processes.[7]

The idea that a supercontinent existed in the early Neoproterozoic arose in the 1970s, when geologists determined that orogens of this age exist on virtually all cratons.[8] Examples are the Grenville orogeny in North America and the Dalslandian orogeny in Europe.

Most reconstructions show Rodinia's core formed by the North American craton (the later paleocontinent of Laurentia), surrounded in the southeast with the East European craton (the later paleocontinent of Baltica), the Amazonian craton ("Amazonia") and the West African craton; in the south with the Río de la Plata and São Francisco cratons; in the southwest with the Congo and Kalahari cratons; and in the northeast with Australia, India and eastern Antarctica. The positions of Siberia and North and South China north of the North American craton differ strongly depending on the reconstruction:[10][11]

Little is known about the paleogeography before the formation of Rodinia. Paleomagnetic and geologic data are only definite enough to form reconstructions from the breakup of Rodinia[14] onwards. Rodinia is considered to have formed between 1.1 billion and 1 billion years ago and broke up again before 750 million years ago.[16] Rodinia was surrounded by the superocean geologists are calling Mirovia (from Russian мировой, mirovoy, meaning "global").

According to J.D.A. Piper, Rodinia is one of two models for the configuration and history of the continental crust in the latter part of Precambrian times. The other is Paleopangea, Piper's own concept.[17] Piper proposes an alternative hypothesis for this era and the previous ones. This idea rejects that Rodinia ever existed as a transient supercontinent subject to progressive break-up in the latter part of Proterozoic times and instead that this time and earlier times were dominated by a single, persistent "Paleopangaea" supercontinent. As evidence, he suggests an observation that the palaeomagnetic poles from the continental crust assigned to this time conform to a single path between 800 and 600 million years ago and latterly to a near-static position between 750 and 600 million years.[7] This latter solution predicts that break-up was confined to the Ediacaran Period and produced the dramatic environmental changes that characterised the transition between Precambrian and Phanerozoic times.

The Rodinia hypothesis assumes that rifting did not start everywhere simultaneously. Extensive lava flows and volcanic eruptions of Neoproterozoic age are found on most continents, evidence for large scale rifting about 750 million years ago.[19] As early as 850 and 800 million years ago,[16] a rift developed between the continental masses of present-day Australia, East Antarctica, India and the Congo and Kalahari cratons on one side and later Laurentia, Baltica, Amazonia and the West African and Rio de la Plata cratons on the other.[20] This rift developed into the Adamastor Ocean during the Ediacaran.

Around 550 million years ago, on the boundary between the Ediacaran and Cambrian, the first group of cratons eventually fused again with Amazonia, West Africa and the Rio de la Plata cratons.[21] This tectonic phase is called the Pan-African orogeny. It created a configuration of continents that would remain stable for hundreds of millions of years in the form of the continent Gondwana.

In a separate rifting event about 610 million years ago (halfway in the Ediacaran period), the Iapetus Ocean formed. The eastern part of this ocean formed between Baltica and Laurentia, the western part between Amazonia and Laurentia. Because the exact moments of this separation and the partially contemporaneous Pan-African orogeny are hard to correlate, it might be that all continental mass was again joined in one supercontinent between roughly 600 and 550 million years ago. This hypothetical supercontinent is called Pannotia.

Influence on paleoclimate and life

Unlike later supercontinents, Rodinia would have been entirely barren. Rodinia existed before complex life colonized dry land. Based on sedimentary rock analysis Rodinia's formation happened when the ozone layer was not as extensive as it is today. Ultraviolet light discouraged organisms from inhabiting its interior. Nevertheless, its existence did significantly influence the marine life of its time.

In the Cryogenian period the Earth experienced large glaciations, and temperatures were at least as cool as today. Substantial areas of Rodinia may have been covered by glaciers or the southern polar ice cap.

Low temperatures may have been exaggerated during the early stages of continental rifting. Geothermal heating peaks in crust about to be rifted; and since warmer rocks are less dense, the crustal rocks rise up relative to their surroundings. This rising creates areas of higher altitude, where the air is cooler and ice is less likely to melt with changes in season, and it may explain the evidence of abundant glaciation in the Ediacaran period.[19]

The eventual rifting of the continents created new oceans and seafloor spreading, which produces warmer, less dense oceanic lithosphere. Due to its lower density, hot oceanic lithosphere will not lie as deep as old, cool oceanic lithosphere. In periods with relatively large areas of new lithosphere, the ocean floors come up, causing the eustatic sea level to rise. The result was a greater number of shallower seas.

The increased evaporation from the larger water area of the oceans may have increased rainfall, which, in turn, increased the weathering of exposed rock. By inputting data on the ratio of stable isotopes 18O:16O into computer models, it has been shown that, in conjunction with quick weathering of volcanic rock, this increased rainfall may have reduced greenhouse gas levels to below the threshold required to trigger the period of extreme glaciation known as Snowball Earth.[22]

Increased volcanic activity also introduced into the marine environment biologically active nutrients, which may have played an important role in the development of the earliest animals.