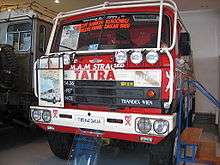 1988 Dakar Rally also known as the 1988 Paris–Dakar Rally was the 10th running of the Dakar Rally event. 311 cars, 183 motorcycles, and 109 trucks started the rally.[1] The rally was won by Juha Kankkunen; the motorcycle category was won by Edi Orioli, the truck category was won by Karel Loprais on a Tatra 815.[2] The event was marred by the death of six people, three participants, a mother and child killed in Mauritania when a camera car ran into a group of spectators and a 10-year-old girl killed crossing the road in Mali.[2]