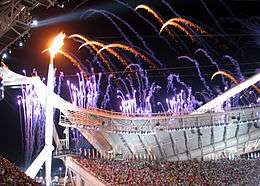 The Olympic flame burns in the Athens Olympic Stadium cauldron, during the opening ceremonies of the 2004 Summer Olympics.

The 2004 Summer Olympics medal table is a list of National Olympic Committees ranked by the number of medals won during the 2004 Summer Olympics, held in Athens, Greece, from 13 to 29 August 2004. A total of 10,625 athletes from 201 countries participated in these games, competing in 301 events in 28 sports. Kiribati and Timor Leste competed for the first time in these Olympic Games.[1]

Athletes from 74 countries won at least one medal, leaving 127 countries without a medal. The United States won the most gold medals (35), the most silver medals (40) and the most medals overall (101). China finished second on the International Olympic Committee medal table (though third in terms of total medals), the country's best performance until the 2008 Beijing Olympics. Russia finished third, (second in total medals), and also won the most bronze medals (38). Host nation Greece finished fifteenth, with six gold, six silver, and four bronze medals,[1] in its best total medal haul since 1896.

Australia became the first nation to improve their gold medal total at the Games immediately after hosting a Summer Olympics.

The medal table is based on information provided by the International Olympic Committee (IOC) and is consistent with IOC convention in its published medal tables.[1] By default, the table is ordered by the number of gold medals the athletes from a nation have won (in this context, a nation is an entity represented by a National Olympic Committee). The number of silver medals is taken into consideration next and then the number of bronze medals. If nations are still tied, equal ranking is given and they are listed alphabetically.

During the Games such changes in medal standings are occurred:

Since the conclusion of the 2004 Games, doping scandals have resulted in the revocations of medals from numerous athletes, thus affecting the medal standings.