Michael ('Mick') Rogers (born 20 December 1979) is a retired Australian professional road bicycle racer who competed professionally between 1999 and 2016, for the Mapei–Quick-Step, Quick-Step–Innergetic, Team HTC–Columbia, Team Sky and Tinkoff teams. He is a three-time World Time Trial Champion, winning consecutively in 2003 (after David Millar was stripped for doping), 2004 and 2005, and won Grand Tour stages at the Tour de France and the Giro d'Italia.

In April 2016, Rogers announced via Twitter, that he was being forced to retire from professional cycling due to a congenital heart defect condition which had been worsening.[3]

Born in Barham, New South Wales, Rogers grew up in Canberra, and now lives in Mendrisio, Switzerland with his Italian wife and three daughters.

Rogers was part of the Australian Institute of Sport, which led him to move to Europe at age 16 as an amateur. He started as a track racer under coach Charlie Walsh. Rogers won the world time-trial championship in 2003, 2004 and 2005. He came second in 2003 but became champion after the winner, David Millar, was disqualified for doping. Rogers received his rainbow jersey and gold medal on the day of the 2004 championship, thereby receiving two gold medals on the same day.

In the 2003 Tour de France, Rogers helped Richard Virenque win his sixth Polka dot jersey as King of the Mountains. He was the last rider left to help in Virenque's day-long escape and stage win.

Rogers finished fourth in the road time trial at the 2004 Olympics in Athens. In May 2011 US cyclist Tyler Hamilton returned his gold medal for this event after admitting to doping during his cycling career, and in August 2012 the International Olympic Committee formally stripped Hamilton of his victory, resulting in Rogers being awarded the bronze medal.[4] In September 2015, he received the Olympic medal in a ceremony at the IOC headquarters in Lausanne, Switzerland.[5]

Rogers joined T-Mobile Team for the 2006 season, and finished 9th overall in the 2006 Tour de France.

On 15 July, Rogers withdrew on the 8th stage of the 2007 Tour after breaking a collar bone in a crash descending the Cormet de Roselend. He continued until the doctor arrived from attending fellow Australian Stuart O'Grady, who ended up stretchered to hospital.

It was after this that Rogers contracted mononucleosis (glandular fever), which caused a dip in his racing form for some time. By late 2009 he had returned to form and began to have significant racing success, with Team Columbia–High Road, the successor to T-Mobile. In 2010, as leader of his team, he won the Tour of Andalucia, and then the Tour of California (the first non-American to do so).

After a disappointing 2010 Tour de France (37th overall), Rogers announced he would concentrate in future on shorter races (e.g. one week in length) as he was no longer suited to the longer tours. 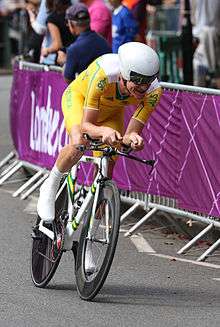 In October 2010 it was announced that he would leave Team HTC–Columbia and join British based Team Sky for the 2011 racing season. However he suffered a relapse of his mononucleosis early in the season and was unable to defend his 2010 Tour of California title. Rogers returned to fitness towards the end of the season.

Rogers began the 2012 season with third place in the Australian National Time Trial Championships,[6] and led Team Sky at the Tour Down Under, where he finished 4th in the general classification. In March, Rogers finished third at the Critérium International; he placed second to BMC Racing Team's Cadel Evans in the individual time trial around Porto-Vecchio,[7] and finished eighth on the final stage, the summit finish of the Col de l'Ospedale.[8] After finishing fifth in April's Tour de Romandie, Rogers won May's Bayern-Rundfahrt stage race in Germany, winning Stage 2 and the time trial Stage 4 in the process, his first victories whilst riding for Sky.[9] Rogers then rode the Critérium du Dauphiné, helping leader Bradley Wiggins win the race, whilst finishing second overall himself after a strong ride in the time trial. Rogers was selected in the Sky squad for the Tour de France, as one of Wiggins' key domestiques. He suffered a crash towards the end of Stage 1, but was able to make it back to the peloton. Rogers played a key team role in the rest of the race, setting the tempo on mountains and notably bringing back a long range attack by Cadel Evans on Stage 11, as Sky ultimately achieved a 1–2 finish in the GC with Wiggins and Chris Froome.

Rogers left Sky to join Saxo–Tinkoff in 2012[2] following a new Sky policy requiring all riders to sign to confirm they have no history of doping[10] although he denied leaving for that reason.

In May, Rogers was the runner-up to Tejay van Garderen in the Tour of California.[11] In July Rogers rode the Tour de France in support of Alberto Contador and finished in 16th place. In October he won the Japan Cup one-day race. In December it was announced that he had tested positive for clenbuterol at the latter race. He was suspended from cycling pending further investigation.[12] On 23 April 2014 the UCI announced he would be cleared of any wrongdoing, no further action would be taken and that Rogers would be free to race again. The UCI accepted that there was a significant probability that the clenbuterol came from contaminated meat consumed while Rogers was competing in China, where the drug is often consumed by animals in slaughterhouses to exhibit better performance in farm sporting events.[13]

He returned to racing just in time to ride the 2014 Giro d'Italia. Throughout much of the race, he rode in support of Rafał Majka. He won his first ever Grand Tour individual stage on the eleventh stage and also won the penultimate stage summit finish at the Monte Zoncolan.

On 22 July 2014, Rogers won his first stage of the Tour de France. It was the 16th day on the longest stage (237.5 km) from Carcassonne to Bagnères-de-Luchon with a time of 6 hours, 7 minutes, 10 seconds. He attacked Cyril Gautier at the bottom of the descent of the Port de Balès with 5 km to cover to win in solo fashion.[14]