Beginning in 1982, the IAAF passed several amendments to its rules to allow athletes to receive compensation for participating in international competitions. However, the organization retained the word amateur in its name until its 2001 congress, at which it changed its name to International Association of Athletics Federations.

The IAAF's president is Sebastian Coe of the United Kingdom. He was elected at the 2015 congress before the 2015 World Championships in Athletics in Beijing, China.[1]

The process to found the IAAF was started at a meeting in Stockholm, Sweden on July 17, 1912 soon after the completion of the 1912 Summer Olympics in that city. Here 27 representatives from 17 national federations agreed to meet at a congress in Germany the following year overseen by Sigfrid Edström who was to become the fledgling organisation's first president. The congress that started on August 20, 1913 in Berlin is when the foundation of the IAAF was formally completed.[2][3][4]

In 2015, a whistleblower leaked IAAF's blood test records from major competitions. The records revealed that, between 2001 and 2012, athletes with suspicious drug test results won a third of the medals in endurance events at the Olympics and World Championships—a total of 146 medals including 55 golds—but the IAAF caught none of them.[5] After reviewing the results, Robin Parisotto, a scientist and leading "anti-doping" expert, said, "Never have I seen such an alarmingly abnormal set of blood values. So many athletes appear to have doped with impunity, and it is damning that the IAAF appears to have idly sat by and let this happen."[5] Craig Reedie, president of the World Anti-Doping Agency (WADA), said his organisation was "very disturbed by these new allegations ... which will, once again, shake the foundation of clean athletes worldwide", and that its "independent commission will investigate the claims".[5]

Around the same time, the University of Tübingen in Germany claimed that the IAAF suppressed publication of a 2011 report in which "[h]undreds of athletes", as many as a third of the world's top athletes, "admitted violating anti-doping rules".[6]

On 1 November 2015, former IAAF president Lamine Diack was arrested in France and is under investigation on suspicion of corruption and money laundering.[7][8] Diack allegedly accepted "$1.2 million from the Russian athletics federation to cover up the positive doping tests of at least six Russian athletes in 2011."[7]

In November 2015, WADA published its report, which found "systemic failures" in the IAAF had prevented an "effective" anti-doping programme and concluded that Russia should be banned from competing in international competitions because of its athletes' test results.[9] The report continued that "the IAAF allowed the conduct to occur and must accept its responsibility" and that "corruption was embedded" in the organization.[10]

In January 2016, as a result of the doping scandal and WADA's report, the IAAF's biggest sponsor, Adidas, announced that it was ending its sponsorship deal with the IAAF four years early. The BBC reported that as a result the IAAF would lose $33 million (£23 million) worth of revenue. The 11-year sponsorship deal with Adidas was due to run until 2019.[11] World-record holding sprinter, Michael Johnson, described the scandal as more serious than that faced by FIFA.[10] In February, 2016, Nestle announced that it was ending its IAAF sponsorship.[12]

In June 2016, following a meeting of the IAAF's ruling council, the IAAF upheld its ban on Russia's track and field team from entering the Rio de Janeiro Olympics.[13] 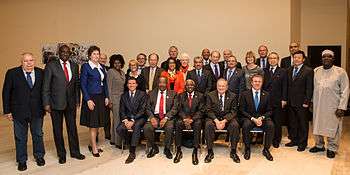 Since the establishment of the IAAF, it has had six presidents:

The IAAF has a total of 215 member federations divided into 6 area associations.[14][15]

Included in its charge are the standardization of timekeeping methods and world records. The IAAF also organizes many major athletics competitions worldwide, including:

The World Championships in Athletics is the foremost athletics competition held by the IAAF.