"Athena" and "Phevos" (Greek: Αθηνά, Φοίβος; pronounced [aθiˈna] and [ˈfivos]) were the Olympic mascots of the 2004 Summer Olympics, held in Athens. The pair are one of the few examples of anthropomorphic mascots in the history of the Olympics. According to the official mascot webpage, “their creation was inspired by an ancient Greek doll and their names are linked to ancient Greece, yet the two siblings are children of modern times - Phevos and Athena represent the link between Greek history and the modern Olympic Games.” [1]

The mascots were named after the Greek gods Athena and Apollo, Phevos being a transcription of the modern Greek pronunciation of Phoebus, an epithet of Apollo. They were loosely modeled after an archaic Greek terra cotta daidala from the 7th century BC (below left), which was recommended by curators at the National Archaeological Museum.

The mascots have been emblazoned on a variety of items for sale, including pins, clothing and other memorabilia. 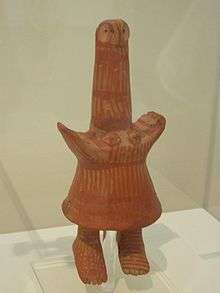 The mascots were based on this archaic terracotta daidala at the National Archaeological Museum of Athens.

Prior to the Games, a group affiliated with the Societas Hellenica Antiquariorum called the Greek Society of the Friends of the Ancients and a Hellenic polytheistic group called the Committee for the Greek Religion Dodecatheon, devoted to the preservation of ancient Greek culture, sued over the mascots, claiming that they "savagely insult" Classical Greek culture.[2] In a BBC Radio interview on June 26, 2004, Dr. Pan. Marinis President of the Societas Hellenica Antiquariorum said that the mascots:

"mock the spiritual values of the Hellenic Civilization by degrading these same holy personalities that were revered during the ancient Olympic Games. For these reasons we have proceeded to legal action demanding the punishment of those responsible."

The fact that the organizing committee referred to the daidala as dolls has been the cause of some controversy among scholars of Ancient Greek culture, as the daidala were religious artifacts.