The 2006 Africa Cup of Nations was the 25th edition of the Africa Cup of Nations, the association football championship of Africa. It was hosted by Egypt. Just like in 2004, the field of sixteen teams was split into four groups of four. Egypt won its fifth championship, beating Cote d'Ivoire in the final 4−2 in a penalty shootout after a goalless draw.

2006 also marked the first time that the defending champion did not automatically qualify for the finals. Tunisia, 2004's champion, qualified for the Cup of Nations by winning their group in the qualification process. 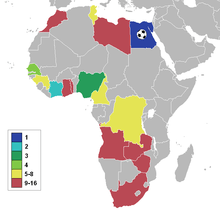 For more details on this topic, see 2006 Africa Cup of Nations squads.

Teams highlighted in green progress to the quarter-finals.

CAF Team of the Tournament