The Ghana national football team represents Ghana in international association football and has done so since the 1950s. The team is nicknamed the Black Stars after the Black Star of Africa in the Flag of Ghana. It is administered by the Ghana Football Association, the governing body for football in Ghana and the oldest football association in Africa (founded in 1920). Prior to 1957, the team played as the Gold Coast.

Although the team did not qualify for the senior FIFA World Cup until 2006 where they qualified for the FIFA World Cup for the first time, they had qualified for five straight Olympic Games Football Tournaments when the tournament was still a full senior national team competition. The team has won the Africa Cup of Nations four times[4] (in 1963, 1965, 1978, and 1982) and has been runner-up 5 times (in 1968, 1970, 1992, 2010, and 2015). After going through 2005 unbeaten, the Ghana national football team won the FIFA Best Mover of the Year Award and reached the second round of the 2006 FIFA World Cup. At the 2010 FIFA World Cup in South Africa, they became only the third African team to reach the World Cup quarter-finals, and in 2014 they competed in their third consecutive World Cup. 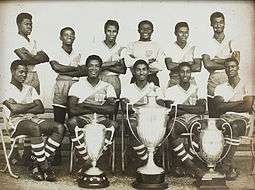 On 19 August 1962 at the Accra Sports Stadium, the Black Stars played Spanish giants Real Madrid, who were at the time Spanish champions, former European champions and intercontinental champions, and drew 3–3.[5] 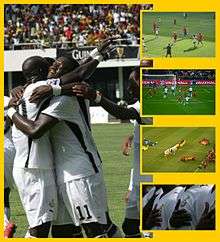 Prior to the year 2000, disharmony among the squad which eventually led to parliamentary and executive intervention to settle issues between two squad members, Abedi Pele and Anthony Yeboah in the late 1990s, may have played some part in the failure of the team to build on the successes of the national underage teams in the late 1990s, but a new generation of Black Stars players who went to the 2001 FIFA World Youth Championship final became the core of the team at the 2002 African Cup of Nations, and were undefeated for a year in 2005 and reached the finals of the 2006 FIFA World Cup, the first time the team had reached the global stage of the tournament. The Black Stars started by succumbing to a 2–0 defeat to eventual champions Italy, but wins over the Czech Republic (2–0) and the United States (2–1) saw them through to the second round, where they lost 3–0 to Brazil.[7] 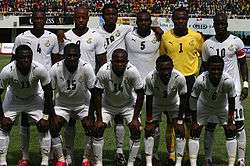 In 2008, Ghana reached a high ranking of 14 according to the FIFA World Rankings. The Black Stars went on to secure a 100 percent record in their qualification campaign, winning the group and becoming the first African team to qualify for the 2010 FIFA World Cup. In the final tournament, the team competed in Group D with Germany, Serbia and Australia. Ghana reached the round of 16 where they played the United States, winning 2–1 in extra time to become the third African nation to reach the World Cup quarter-finals. The team then lost to Uruguay in a penalty shootout in the quarter-finals, having missed a penalty kick in extra time after a certain goal was prevented by Luis Suárez's deliberate handball, who was then shown a red card for his actions.[8]

Ghana was sufficiently highly ranked by FIFA to start their qualifying for the 2014 World Cup in the Second round. They won the group, and in the following round qualified for the 2014 World Cup finals in November 2013, beating Egypt 7–3 on aggregate in a two-legged play-off.[10][10] Ghana was drawn in Group G for the finals, where they faced Germany, Portugal, and the United States.[11] The World cup finals ended up in disappointment as Ghana exited in the group stages with issues of poor planning and payment bonuses being blamed for the poor performance, although they did manage a 2–2 draw with Germany, who ended up winning the competition.

The Ghanaian nationals are 83% are Akan-speakers, and about 21% English-speakers; match schedules of the Black Stars are broadcast both in English as in the case of inter-continental matches and in Akan nationally by Viasat 1; and during the scheduled qualification for World Cup 2014 national broadcaster GTV sub-division of Ghana Broadcasting Corporation (GBC) broadcast to the Ghana public home qualifiers with away qualifiers broadcast by the satellite television broadcasting corporation Viasat 1, in which the exhibition match against Turkey in August 2013 was televised by Viasat 1 and the qualifiers for the 2015 Africa Cup of Nations and the 2018 Inter-Continental Championships are scheduled for public broadcast by the corporations GFA TV, GBC and Viasat 1.[13] 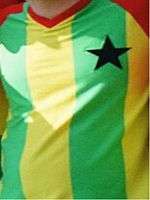 The black star is present on the Flag of Ghana and national coat of arms in the center of the primordial national crest. Adopted following the independence of Ghana in 1957, the black star has always been included in its kits.[6] The Black Stars' kits were sponsored by Puma SE from 2005, with the deal ending in 2014.[14]

The Black Star kit is used instead of the original gold, green, and red coloured football kit that coordinates with the colours of the Ghana national flag. The Black Stars are sporting an all-white and partly black football kit which was worn from the years 1957 to 1989 and re-worn from 2006 until December 2014.

The Ghana national football team (The Black Stars) introduced the kit colour to coordinate with the national flag of Ghana and was worn from the years 1990 to 2006 designed with the national colours gold with green and red visibly decorated on its kits, as in the team's crest and in general, Pan-African colours. The gold with green and red kit concept and design was also used in the sixties and seventies, and designed with vertical stripes gold-green and red shoulders with introduction of an all black 2nd kit in 2008 aligning the team's symbol of continuity; Black Star and in 2015, Black Stars' gold-red-green coloured kit and all black coloured kit is to be reassigned to the position of 1st and 2nd kits following the induction of a brown with blue and gold coloured Black Stars 3rd kit in 2012.[15][16]

The current kit man for the Ghanaian Football Association is Andrew Strong.

The Black Stars are headed by president of the Ghana Football Association, Kwesi Nyantakyi,[18] and vice-president George Afriyie,[19] with Frank Davis as director of football, and Edward Bawa as treasurer.[20] The Ghana Football Association (GFA) signed a CN¥92.2 million ($15 million) deal with Ghanaian state-run oil and gas exploration corporation, Ghana National Petroleum Corporation (GNPC), to sponsor the Black Stars and the renewable contract saw the oil and gas exploration corporation become the global headline sponsor of the Black Stars, with a yearly Black Stars player salary wage bill,[21][22] following the gold mining corporations Ashanti Goldfields Corporation and Goldfields Ghana Limited (GGL), which had been sponsoring the Black Stars since 2005.[23]

On 28 August 2013, Ghana Football Association (GFA) launched its TV Channel and TV programmed called "GFA TV", thus becoming the first football association on the Africa continent to launch its own TV programme and TV network which has the exclusive rights and television rights to the broadcasting of all the Black Stars' matches.[24] In November 2013, the Black Stars signed a 2013–2015 CN¥30.6 million (US$5 million) and an additional classified multi-million private bank sponsorship deal with 100% wholly owned Ghanaian state-run private banking institution UniBank.[25]

The Black Stars maintain an average stadium match attendance of 60,000+ and an average stadium match attendance high of 80,000+ such as in the case of the Black Stars' 2010 FIFA World Cup quarter-final against Uruguay in which was attended by 84,017 spectators.[26] Ghana's match against England on 29 March 2011 had the largest away following for any association football national team since the re-opening of Wembley Stadium in 2007.[27] The match was watched by 700 million people around the world.[27]

Following the team's appearances at the 2006 and 2010 World Cup tournaments they were greeted by several hundred avid fans dancing and singing at Kotoka International Airport in Accra.[28]

Ghana vs. Nigeria in the 2008 Africa Cup of Nations Quarter-Final

The Black Stars' (Ghana national football team) main footballing rivalry is with the Super Eagles (Nigeria national football team). The "Battle of Supremacy on the Gulf of Guinea" is between two of the most successful teams on the African continent.[29] The proximity of the two countries to each other, a dispute between the different association football competitions and a non-sporting dispute between Ghana and Nigeria in which Ghana battles Nigeria in contention for the supremacy of the whole of West Africa zone add to this rivalry.[29]

In books and popular culture

Products including books, documentary films, Azonto dances and songs have been made in the name of the Ghana national football team. These may be intended with commercial motives but are focused on previous and future World Cups or Africa Cup of Nations tournaments. 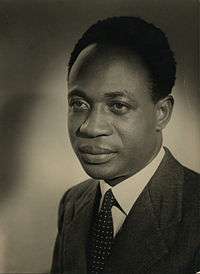 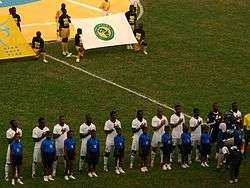 Egypt Caps and goals correct as of: 13 November 2016 after the match against Egypt.

The following players have been called up in the last 12 months.

The football association of Ghana (GFA) administers several national teams at different age levels between 16 and 23 years of age.

The under-23 level (or Olympic team) from the 1992 Summer Olympics competes in Olympic football tournaments, Football at the All-Africa Games, CAF U-23 Championship and is restricted to using players aged 23 years and under.[45] The football at the Olympic Games is thus considered as an under-23 World Cup and since the Olympic Games of 1992; the under-23 level has participated in 5 Olympic Games, becoming the first African team to win an Olympic medal when they won bronze in 1992.[45] 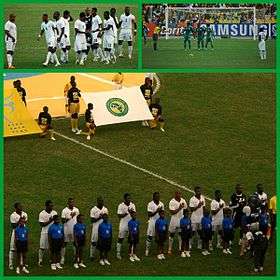 Black Stars at the CAF Africa Cup of Nations

Ghana has won the Africa Cup of Nations four times – in 1963, 1965, 1978, and 1982 – equal with Cameroon and bettered only by Egypt. As the first winner of three Nations Cup tournaments, Ghana obtained the right to permanently hold the trophy in 1978.[47] The Black Stars have qualified for the tournament 20 times in total, finishing as runners-up five times, third once, and fourth three times. Thus, Ghana has the most final game appearances at the tournament with nine, essentially making the final in half of its appearances in the tournament. Ghana also holds the record of most consecutive semi-final appearances with five straight between 2008 and 2015. 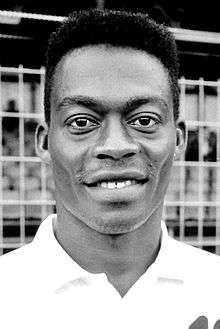 a. Note: The Gold Coast national football team established in 1950; country known as Gold Coast then renamed Ghana in 1957, not competing in international competitions and not being part of neither FIFA nor CAF until 1958, and therefore also recognized by the International Olympic Committee (IOC).
n. Note: Football at the Summer Olympics has been an under-23 tournament since 1992.

The Black Stars have qualified for three FIFA World Cup tournaments; 2006, 2010 and 2014. In 2006, Ghana was the only African side to advance to the second round of the FIFA World Cup in Germany and was the sixth nation in a row from Africa to progress beyond the group stages of the World Cup.[48] The Black Stars had the youngest team in the FIFA World Cup 2006 with an average age of 23 years and 352 days,[48] and were praised for their improving performance.[49][50] FIFA ranked Ghana 13th out of the 32 countries who competed in the tournament.[51]

In the 2010 World Cup, Ghana progressed beyond the group stages of the World Cup in South-Africa, and reached the quarter-finals where they were eliminated by Uruguay. The Black Stars were defeated on penalty shootout after Luis Suárez hand-balled on the goal line deep into extra time, preventing a certain winning goal.[52] Of the 32 countries that participated in the 2010 FIFA World Cup, FIFA ranked Ghana 7th.[53]

After beating Egypt 7–3 on aggregate in November 2013, Ghana qualified for the 2014 World Cup in Brazil.[54] They were drawn in Group G with Germany, USA and Portugal.[55] For the first time Ghana fell in the group stage, tying Germany 2–2 and losing to both the United States and Portugal by 2–1.[56] 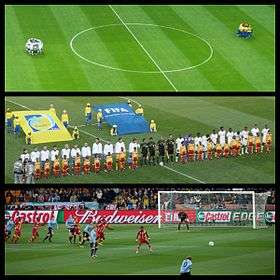 Black Stars at the World Cup and Black Stars vs. Uruguay in the 2010 FIFA World Cup quarter-final match at Soccer City, Johannesburg on 2 July 2010

Other Tournaments and Cups

Caps and goals updated as of June 5, 2016. Players in bold are still active at international level.