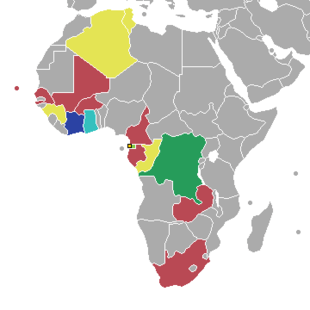 Result of countries participating in the 2015 Africa Cup of Nations

The tournament was initially scheduled to be hosted by Morocco who later demanded postponement of the event because of the Ebola virus epidemic in West Africa;[3] subsequently Morocco was ruled out as a host country and replaced by Equatorial Guinea.[4]

The Ivory Coast won the tournament for their second Africa Cup of Nations title, defeating Ghana 9–8 in a penalty shoot-out after the final finished goalless following extra time. The DR Congo came third and the hosts Equatorial Guinea fourth, while defending champions Nigeria did not qualify.

CAF received 3 bids before 30 September 2010, the deadline, to host either the 2015 or 2017 Africa Cup of Nations from DR Congo, Morocco and South Africa. All three bids were originally put on a shortlist.[13] CAF then began an inspection procedure, on November and December 2010, intending to visit each bidding country to view stadiums, infrastructure, and football interest. They inspected the DR Congo first.[14] Shortly after the inspection, DR Congo informed CAF that they would be withdrawing their bids for both the 2015 and 2017 Africa Cup of Nations tournaments.[15] Morocco was the next country to be inspected.[16] South Africa was inspected last.

On 29 January, during the 2011 CAF Super Cup, the CAF Board decided that Morocco would host the 2015 African Cup of Nations, while the 2017 edition would be held in South Africa.[18] The four Morocco host cities which were scheduled to host the tournament were Rabat, Marrakesh, Agadir and Tangier, as announced by the CAF Executive Committee on 23 September 2013.[19] Casablanca would serve as an alternative venue.[20]

In October 2014, the government of Morocco requested a postponement of the tournament due to the Ebola virus epidemic in West Africa.[21] After the matter was discussed at the Executive Committee meeting on 2 November 2014, CAF decided to keep the date of the tournament, while also asking for a clarification from the Royal Moroccan Football Federation of whether they still wish to host the tournament.[22] On 8 November, Morocco failed to meet this deadline to confirm it would host the tournament.[23] Three days later CAF confirmed that Morocco would not host the tournament and a new host would be chosen from a list of countries which have expressed interest. Morocco, who had previously qualified as hosts, were disqualified from participation at the tournament.[3][24] CAF confirmed legal action against Morocco due to a contract signed in April 2014.[25] Moroccan Sports Minister Mohamed Ouzzine said that CAF had falsely accused his country of "refusing" to host the tournament when it wanted it postponed, and justified the decision by citing that the World Health Organization gives every country the right to protect its citizens.[25] On 6 February 2015, CAF announced that Morocco had been banned from the next two AFCON tournaments, fined 1 million US dollars, as well as demanding 9 million US dollars in compensation.[26][27] However, the ban was overturned by the Court of Arbitration for Sport, meaning Morocco may enter the tournaments.[28]

Egypt, Ghana, South Africa and Sudan all declined to take over as hosts.[29] Angola, the hosts of the 2010 edition, were spoken of as a potential replacement due to existing stadia and infrastructure in the country. However, a member of the Angolan Football Federation stated that it could not be possible as the new government budget did not include any tournaments.[25]

On 14 November 2014, CAF announced that Equatorial Guinea would host the tournament.[4] 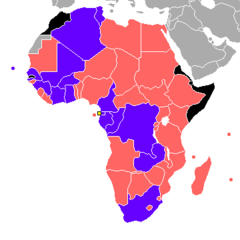 Qualified
Failed to qualify
Withdrew, disqualified or did not enter
Not part of CAF

51 nations entered the tournament (excluding initial hosts Morocco). It was the competitive debut of South Sudan. Djibouti and Somalia declined to enter.

Morocco would have automatically qualified as hosts; however, after their refusal to host, they were expelled from the tournament by the CAF.[3][24] Equatorial Guinea was chosen as the new host, and despite having played in the qualifiers and been disqualified due to fielding an ineligible player, they qualified for the tournament automatically.[4]

The defending champions Nigeria failed to qualify for the tournament.[30]

The following sixteen teams qualified for the tournament.

The four Equatorial Guinean cities selected to host the tournament were Malabo, Bata, Mongomo and Ebebiyín.[31]

Malabo and Bata were also host venues for the 2012 Africa Cup of Nations.

Screening for Ebola was given to all spectators attending matches.[32]

Only the hosts got an automatic qualification spot, the other 15 teams qualified through qualification tournament. At the finals, the 16 teams were drawn into four groups of four teams each. The teams in each group played a single round robin. After the group stage, the top two teams from each group advanced to the quarterfinals. The quarterfinal winners advanced to the semifinals. The semifinal losers played in the third place match, while the semifinal winners played in the final.[33]

The following referees were chosen for the 2015 Africa Cup of Nations.

Each team could register a squad of 23 players.[33]

The group winners and runners-up advance to the quarter-finals.

The teams are ranked according to points (3 points for a win, 1 point for a draw, 0 points for a loss). If tied on points, tiebreakers are applied in the following order:[33]

Guinea and Mali finished level on the second spot after the group stage, making the first drawing of lots needed at the tournament since 1988. Unlike some other international tournaments, 2015 Africa Cup of Nations tournament regulations would not use fair-play criteria or a penalty shoot-out after the teams met on the last match day to determine the final group ranking. Both head coaches have openly criticised the regulations.[38]

On 27 January 2015, the CAF announced that they had relocated the venues of two of the quarter-finals:[42]

Note: no extra-time was played

Orange Man of the Competition

Nissan Goal of the tournament

Samsung Fair Player of the Tournament

Fair Play of the tournament

CAF Team of the Tournament[45]

In the final tournament, a player was suspended for the subsequent match in the competition for either getting red card or accumulating two yellow cards in two different matches. The disciplinary panel has the ability to increase the automatic one match ban for a red card (e.g. for violent conduct). Single yellow card cautions were erased at the conclusion of the group stage, and were not carried over to the knockout stage.[33] The following players were or are suspended during the final tournament – for one or more games – as a result of red cards or yellow card accumulations:

The 2015 Africa Cup of Nations has one title sponsor and seven official sponsors as shown below.[51]

The new Adidas Africa Cup Ball is called Adidas Marhaba (meaning Welcome, in Arabic). The Africa Cup 2015 Ball was unveiled November 26, 2014 following the controversy about the host situation for the 2015 Africa Cup of Nations.[52]

The official mascot of the tournament was "Chuku Chuku", a porcupine.[53]

The opening ceremony of the 2015 Africa Cup of Nations took place on 17 January, at the Estadio de Bata, before the opening match of the tournament between hosts Equatorial Guinea and Congo.

Guinea and Mali finished with equal records in Group D, thus the drawing of lots was required to choose who would advance into the quarter-finals. Prior to the draw, Mali coach Henri Kasperczak said that the tournament "must find a more sporting way [to decide who advances], fairer...This does not correspond to a sporting spirit”. His Guinean counterpart Michel Dussuyer said that neither team deserved to be eliminated in that manner.[54]

Guinea won the draw, causing a complaint from Boubacar Diarra, president of the Malian FA. Issa Haytou, president of CAF, defended the process as the only option.[55]

The CAF Disciplinary Committee's South African President Raymond Hack stated that CAF's Member Associations had chosen the option of picking lots ahead of penalties six months prior. He also said that the "Fair Play [disciplinary] table was to be used but the countries object to that and they said the table must be taken out of the rules. Had the Fair play table been used, Guinea would have qualified ahead of Mali with a better disciplinary record.[56]

Wadie Jary, the president of the Tunisian Football Federation, claimed that there was a bias against Tunisia following their controversial quarter-final defeat to Equatorial Guinea on 31 January 2015. He was banned from CAF competitions and activities.[57] Rajindraparsad Seechurn, the Mauritian referee who gave a penalty to Equatorial Guinea in that match, was banned from officiating for six months and removed from CAF's elite register of referees.[58] The Tunisian FA was fined $50,000 for confronting the referee during the match, in addition to damage to changing room facilities, while Equatorial Guinea was fined $5,000 for inadequate security at the stadium.[58]

During the semi-final fixture between host nation of Equatorial Guinea and Ghana several incidents occurred between the home fans, visiting fans and police. At the half-time break with Ghana leading the game 2-0, the Ghanaian players were protected from hostile Equatoguinean fans by police using plastic shields.

During the 82nd minute in the second half, fans rushed onto the pitch and missiles were thrown at the Ghanaian substitute players. The players moved onto the pitch to escape the missiles. The travelling Ghanaian fans were also targets and took shelter near the goal of the pitch, out of the range of those throwing objects. A helicopter was dispatched and used to disperse spectators out of the stadium by hovering at a low height above them. The Ghanaian FA described the incident as being similar to a "war zone".[59]

Equatorial Guinea's Police force had fired smoke bombs into the stands in an attempt to bring order.[60] The game was stopped for about 30 minutes, before recommencing for a few minutes.

CAF imposed a US$100k fine on FEGUIFUT and were informed an 'official match' in Equatorial Guinea must be held 'behind closed doors' after the tournament's completion.[61]

DR Congo defender Gabriel Zakuani stated that he would rather his team forfeit the third-place playoff instead of play in front of Equatorial Guinea's fans, an opinion which was not shared by his manager Florent Ibengé.[62]