In a sprint finish of some eighteen riders, defending champion Amalie Dideriksen of Denmark was able to retain her title, repeating the feat of Great Britain pair Nicole Cooke in 2000 and 2001, and Lucy Garner in 2011 and 2012. Dideriksen out-sprinted Italy's Sofia Bertizzolo, the European champion, for the gold medal, with Agnieszka Skalniak of Poland taking the bronze medal.

All National Federations were allowed to enter eight riders for the race, with a maximum of four riders to start. In addition to this number, the outgoing World Champion and the current continental champions were also able to take part.[3]

All times are in Central European Time (UTC+1).[6]

93 cyclists from 35 nations took part in the women's junior road race. The numbers of cyclists per nation are shown in parentheses.[7]

The UCI assigned premiums for the top 3 finishers with a total prize money of €3,450.[8] 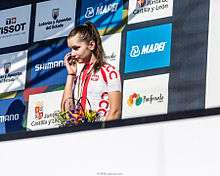