The Abbey of Lorsch (German: Reichsabtei Lorsch; Latin: Laureshamense Monasterium, called also Laurissa and Lauresham) is a former Imperial abbey in Lorsch, Germany, about 10 km east of Worms. It was one of the most renowned monasteries of the Carolingian Empire. Even in its ruined state, its remains are among the most important pre-Romanesque–Carolingian style buildings in Germany. Its chronicle, entered in the Lorscher Codex compiled in the 1170s (now in the state archive at Würzburg) is a fundamental document for early medieval German history. Another famous document from the monastic library is the Codex Aureus of Lorsch. In 1991 the ruined abbey was listed as a UNESCO World Heritage Site.[1]

The following historical names have been recorded: 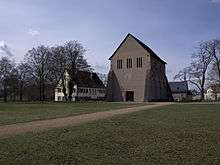 The abbey was founded in 764 by the Frankish Count Cancor and his widowed mother Williswinda as a proprietary church (Eigenkirche) and monastery on their estate, Laurissa. It was dedicated to Saint Peter and Saint Paul. The founders entrusted its government to Cancor's nephew Chrodegang, Archbishop of Metz, who became its first abbot. The pious founders enriched the new abbey by further donations. To make the abbey popular as a shrine and a place of pilgrimage, Chrodegang obtained from Pope Paul I the body of Saint Nazarius, martyred at Rome with three companions under Diocletian. [2]

On 11 July 765, the sacred relics arrived, and with great solemnity were deposited in the basilica of the monastery. In 766 Chrodegang resigned the office of abbot, in favour of his other duties as Archbishop of Metz. He then sent his brother Gundeland to Lorsch as his successor, with fourteen Benedictine monks.

That same year, there was a dispute about property rights between Gundeland and Cancor's son and the abbey was moved to an Ice Age dune, a few hundred metres from its original location on a small island in the Weschnitz. In 772, Gundeland applied to the highest authority, Charlemagne, who found in his favour. Gundeland gave the abbey with all his properties to the king, turning it into a Royal abbey.[2]

The abbey and basilica were then renamed in honour of Saint Nazarius: the main church of Saints Peter, Paul, and Nazarius was consecrated by the Archbishop of Mainz in September 774, in the presence of Charlemagne.

Many miracles were said to be wrought through the intercession of Saint Nazarius at Lorsch, and from all parts of Europe pilgrims in large numbers came to visit the shrine. In the course of the ninth century the library and scriptorium of Lorsch made it one of the cultural centres of Germany; its four surviving ninth-century catalogues show that it was rich in both Classical and Christian texts.[3] Few Carolingian manuscripts are better known than the Lorsch gospels, the Codex Aureus of Lorsch, now divided between the Vatican Library and the Batthyaneum Library, Alba Iulia, Romania; the carved ivory consular diptychs of Anastasius (consul 517) that were reused for its bindings are urbane classicising works of art in themselves, and embodiments of the classical tradition of Byzantium as it was transmitted to Lorsch in the time of Charlemagne.[4]

In 876, shortly after the death of Ludwig der Deutsche (Louis the German), the abbey became the burial place for the first "German" king. His son, Ludwig der Jüngere (Louis the Younger, died 882) and his grandson Hugo (died 879) were also buried at Lorsch. The burial chapel (ecclesia varia) later continued to serve as a Royal burial ground, e.g. for Kunigunde (died after 915), wife of the first non-Carolingean king, Konrad I (Conrad I).[2]

Popes and emperors repeatedly favoured the abbey with privileges and estates ranging from the Alps to the North Sea, so that in a short time it became not only immensely rich, but also a seat of political influence. It was declared a Reichsabtei (a sovereign principality in its own right, subject directly and solely to the emperor.

From 895-956, the abbey was not allowed to elect its own abbots, they were appointed by the king. Emperor Otto I restored this right to Lorsch. A confrontation between ruler and abbot about the construction of the castle Starkenburg within view of the abbey resulted in abbot Udalrich confronting the king at Trebur with 1,200 armed riders. By 1090, Lorsch had been visited by kings/emperors around 20 times. In 1052, Pope Leo IX came to consecrate an altar in the burial chapel of the eastern Carolingeans.[2]

The abbey, enjoying sovereign territorial rights, became implicated in several local feuds and in a number of wars. After 46 abbots of the Benedictine Order had governed the abbey, Conrad, the last of the abbots, was deposed by Pope Gregory IX in 1226, and through the influence of Friedrich II (Frederick II), Lorsch came into the possession of Siegfried III, Archbishop of Mainz, in 1232, ending the period of Lorsch's cultural and political independence.

In 1248 Premonstratensian monks from Allerheiligen were given charge of the monastery with the sanction of Pope Celestine IV. In 1461, the abbey was mortgaged to Electoral Palatinate. In 1556, Elector Palatine Otto Heinrich implemented Reformation in his fief and dissolved the monasteries.

He removed the contents of the library to Heidelberg, forming the famous Bibliotheca Palatina, just prior to Lorsch's dissolution in 1557/1563. The remaining religious inhabitants of the abbey were pensioned and sent away. In 1623, after the capture of Heidelberg, the Elector Maximilian of Bavaria presented the renowned library, 196 cases of manuscripts, to Pope Gregory XV.[5] Leo Allatius was sent to superintend its removal to Rome, where it was incorporated into the Vatican library as the "Biblioteca Palatina".

Destruction of the abbey

During the Thirty Years' War Lorsch and its neighbourhood suffered greatly. In 1621, Spanish troops pillaged the abbey and most of the buildings at Lorsch were pulled down. After the Archbishopric of Mainz regained possession of it in 1623, the region was returned to the Catholic faith. However, the abbey remained a ruin and served as a source of building materials for the whole region.[2]

The most depressed period for Lorsch was during the wars of Louis XIV of France in the late 17th century. Whole villages in the region were laid in ruins, the homes of the peasantry were burned, and the French soldiers torched the old abbey buildings. One portion, which was left intact, served as a tobacco warehouse in the years before World War I. The ancient entrance hall, the Königshalle or aula regia (illustration, above), built in the ninth century by King Louis II, is the oldest monument of Carolingian architecture.