"Gregory IX" redirects here. For the Catholicos of the Holy See of Cilicia in 1439–1446, see Gregory IX of Cilicia.

Pope Gregory IX Latin: Gregorius IX (born Ugolino di Conti; c. 1145 – 22 August 1241), was Pope from 19 March 1227 to his death in 1241. He is known for issuing the Decretales and instituting the Papal Inquisition, a mechanism that severely punished people accused of heresy, in response to the failures of the episcopal inquisitions established during the time of Pope Lucius III through his papal bull Ad abolendam issued in 1184.

The successor of Pope Honorius III, he fully inherited the traditions of Pope Gregory VII and of his cousin Pope Innocent III, and zealously continued their policy of Papal supremacy.

Ugolino (Hugh) was born in Anagni. The date of his birth varies in sources between ca. 1145.[1] and 1170.[2] He received his education at the Universities of Paris and Bologna.

He was created Cardinal-Deacon of the church of Sant'Eustachio by his cousin[3] Innocent III in December 1198. In 1206 he was promoted to the rank of Cardinal Bishop of Ostia e Velletri. He became Dean of the Sacred College of Cardinals in 1218 or 1219. Upon the special request of Saint Francis, in 1220, Pope Honorius III appointed him Cardinal Protector of the order of the Franciscans.

As Cardinal Bishop of Ostia, he cultivated a wide range of acquaintances, among them the Queen of England, Isabella of Angoulême.[4]

Gregory IX was over eighty years old when he was elevated to the papacy in the papal election of 1227.[1] He took the name "Gregory" because he formally assumed the papal office at the monastery of Saint Gregory ad Septem Solia.[5]

Gregory's Bull Parens scientiarum of 1231, after the University of Paris strike of 1229, resolved differences between the unruly university scholars of Paris and the local authorities. His solution was in the manner of a true follower of Innocent III: he issued what in retrospect has been viewed as the magna carta of the University, assuming direct control by extending papal patronage: his Bull allowed future suspension of lectures over a flexible range of provocations, from "monstrous injury or offense" to squabbles over "the right to assess the rents of lodgings".

Alarmed by the spread of old heresies in Spain and France, as well as the violent mob action against them, in 1233 Gregory IX established the Papal Inquisition to regularize the process,[6] although he did not approve the use of torture as a tool of investigation or for penance.

This pope, being a remarkably skillful and learned lawyer, caused to be prepared Nova Compilatio decretalium, which was promulgated in numerous copies in 1234. (It was first printed at Mainz in 1473.) This New Compilation of Decretals was the culmination of a long process of systematising the mass of pronouncements that had accumulated since the Early Middle Ages, a process that had been under way since the first half of the 12th century and had come to fruition in the Decretum, compiled and edited by the papally commissioned legist Gratian and published in 1140. The supplement completed the work, which provided the foundation for papal legal theory.

In the 1234 Decretals, he invested the doctrine of perpetua servitus iudaeorum – perpetual servitude of the Jews – with the force of canonical law. According to this, the followers of the Talmud would have to remain in a condition of political servitude until Judgment Day. The doctrine then found its way into the doctrine of servitus camerae imperialis, or servitude immediately subject to the Emperor's authority, promulgated by Frederick II. The Jews were thus suppressed from having direct influence over the political process and the life of Christian states into the 19th century with the rise of liberalism.[7]

In 1239, under the influence of Nicholas Donin, a Jewish convert to Christianity, Gregory ordered that all copies of the Jewish Talmud be confiscated. Following a public disputation between Christians and Jewish theologians, this culminated in a mass burning of some 12,000 handwritten Talmudic manuscripts on 12 June 1242, in Paris. 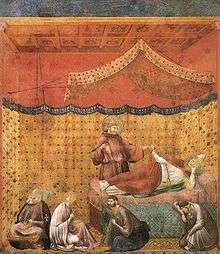 Gregory was a supporter of the mendicant orders which he saw an excellent means for counteracting by voluntary poverty the love of luxury and splendour which was possessing many ecclesiastics. He was a friend of Saint Dominic as well as Clare of Assisi. On 17 January 1235, he approved the Order of Our Lady of Mercy for the redemption of captives. He appointed ten cardinals[8] and canonized Saints Elisabeth of Hungary, Dominic de Guzmán, Anthony of Padua, and Francis of Assisi, of whom he had been a personal friend and early patron. He transformed a chapel to Our Lady in the church of Santa Maria del Popolo in Rome.

Gregory IX endorsed the Northern Crusades and attempts to conquer Orthodox Russia (particularly the Pskov Republic and the Novgorod Republic).[9] In 1232, Gregory IX requested the Livonian Brothers of the Sword to send troops to protect Finland, whose semi-Pagan people were fighting against the Novgorod Republic in the Finnish-Novgorodian wars;[10] however, there is no known information if any ever arrived to assist. 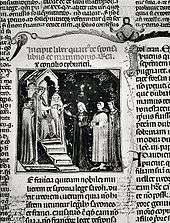 Edicts of Gregory IX with glosses of Bernardo di Bottone. An example of books burned by the Germans.[11]

At the coronation of Frederick II in Rome, 22 November 1220, the emperor made a vow to embark for the Holy Land in August 1221. Gregory IX began his pontificate by suspending the Holy Roman Emperor Frederick II, for dilatoriness in carrying out the promised Sixth Crusade. Frederick II appealed to the sovereigns of Europe complaining of his treatment. The suspension was followed by excommunication and threats of deposition, as deeper rifts appeared. Frederick II went to the Holy Land and in fact managed to take possession of Jerusalem. Gregory IX distrusted the emperor, since Rainald, the imperial Governor of Spoleto, had invaded the Pontifical States during the emperor's absence.[1] In June 1229, Frederick II returned from the Holy Land, routed the papal army which Gregory IX had sent to invade Sicily, and made new overtures of peace to the pope.

Gregory IX and Frederick came to a truce, but when Frederick defeated the Lombard League in 1239, the possibility that he might dominate all of Italy, surrounding the Papal States, became a very real threat. A new outbreak of hostilities led to a fresh excommunication of the emperor in 1239 and to a prolonged war. Gregory denounced Frederick II as a heretic and summoned a council at Rome to give point to his anathema. Frederick responded by trying to capture or sink as many ships carrying prelates to the synod as he could. Eberhard II von Truchsees, Prince-Archbishop of Salzburg, in 1241 at the Council of Regensburg declared that Gregory IX was "that man of perdition, whom they call Antichrist, who in his extravagant boasting says, 'I am God, I cannot err'."[12] He argued that the Pope was the "little horn" of Daniel 7:8:[13] 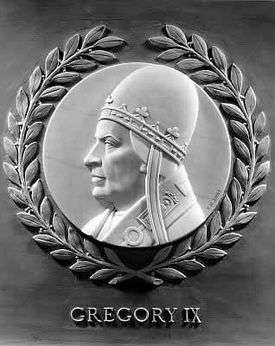 Bas-relief of Gregory IX in the US House of Representatives

A little horn has grown up with eyes and mouth speaking great things, which is reducing three of these kingdoms—i.e. Sicily, Italy, and Germany—to subserviency, is persecuting the people of Christ and the saints of God with intolerable opposition, is confounding things human and divine, and is attempting things unutterable, execrable.[14]

The struggle was only terminated by the death of Gregory IX on 22 August 1241. He died before events could reach their climax; it was his successor Pope Innocent IV who declared a crusade in 1245 that would finish the Hohenstaufen threat.

According to scholars, Vox in Rama "is the first official church document that condemns the black cat as an incarnation of Satan, and consequently it was the death warrant for the animal".[15] It is also claimed that this worsened the Black Death a century after Gregory's time, because the plague was spread by rats which were unchecked in Europe due to the decline of cat numbers.[16] The Black Death began in central Asia and spread west, devastating large swathes of central Asia, Asia Minor and the Middle East before hitting Europe.[17] Most accept that the Black Death was caused by a bubonic plague, although there are alternative theories of the Black Death and some research provides evidence that the plague was pneumonic, an airborne infection spread from human to human, not bubonic, one spread by the fleas on rats.[18] Furthermore, in recent research the rats are exonerated as reservoir hosts for the Black Death.[19]