Unlike most Common-law jurisdictions, the majority of civil law jurisdictions have specialized courts or sections to deal with administrative cases which, as a rule, will apply procedural rules specifically designed for such cases and different from that applied in private-law proceedings, such as contract or tort claims.

In Brazil, unlike most Civil-law jurisdictions, there is no specialized court or section to deal with administrative cases. In 1998, a constitutional reform, led by the government of the President Fernando Henrique Cardoso, introduced regulatory agencies as a part of the executive branch. Since 1988, Brazilian administrative law has been strongly influenced by the judicial interpretations of the constitutional principles of public administration (art. 37 of Federal Constitution): legality, impersonality, publicity of administrative acts, morality and efficiency.

The President of the Republic exercises the administrative function, in collaboration with several Ministries or other authorities with ministerial rank. Each Ministry has one or more under-secretary that performs through public services the actual satisfaction of public needs. There is not a single specialized court to deal with actions against the Administrative entities, but instead there are several specialized courts and procedures of review.

Main article: Administrative law in the People's Republic of China

Administrative law in the People's Republic of China was virtually non-existent before the economic reform era initiated by Deng Xiaoping. Since the 1980s, the People's Republic of China has constructed a new legal framework for administrative law, establishing control mechanisms for overseeing the bureaucracy and disciplinary committees for the Communist Party of China. However, many have argued that the usefulness of these laws is vastly inadequate in terms of controlling government actions, largely because of institutional and systemic obstacles like a weak judiciary, poorly trained judges and lawyers, and corruption.

Over the course of their history, France's administrative courts have developed an extensive and coherent case law (jurisprudence constante) and legal doctrine (principes généraux du droit and principes fondamentaux reconnus par les lois de la République), often before similar concepts were enshrined in constitional and legal texts. These principes include:

Administrative law in Germany, called “Verwaltungsrecht”de:Verwaltungsrecht (Deutschland), generally rules the relationship between authorities and the citizens and therefore, it establishes citizens’ rights and obligations against the authorities. It is a part of the public law, which deals with the organization, the tasks and the acting of the public administration. It also contains rules, regulations, orders and decisions created by and related to administrative agencies, such as federal agencies, federal state authorities, urban administrations, but also admission offices and fiscal authorities etc. Administrative law in Germany follows three basic principles.

The Verwaltungsverfahrensgesetz (VwVfG), which was enacted in 1977,[13] regulates the main administrative procedures of the federal government. It serves the purpose to ensure a treatment in accordance with the rule of law by the public authority. Furthermore, it contains the regulations for mass processes and expands the legal protection against the authorities. The VwVfG basically applies for the entire public administrative activities of federal agencies as well as federal state authorities, in case of making federal law. One of the central clause is § 35 VwVfG. It defines the administrative act, the most common form of action in which the public administration occurs against a citizen. The definition in § 35 [14] says, that an administration act is characterized by the following features:

Administration procedural law (Verwaltungsgerichtsordnung [VwGO]), which was enacted in 1960, rules the court procedures at the administrative court. The VwGO is divided into five parts, which are the constitution of the courts,[23] action, remedies and retrial, costs and enforcement15 and final clauses and temporary arrangements.[24]

In absence of a rule, the VwGO is supplemented by the code of civil procedure (Zivilprozessordnung [ZPO]) and the judicature act (Gerichtsverfassungsgesetz [GVG]).[25] In addition to the regulation of the administrative procedure, the VwVfG also constitutes the legal protection in administrative law beyond the court procedure. § 68 VwVGO rules the preliminary proceeding, called “Vorverfahren” or “Widerspruchsverfahren”,[26] which is a stringent prerequisite for the administrative procedure, if an action for rescission or a writ of mandamus against an authority is aimed.[27] The preliminary proceeding gives each citizen, feeling unlawfully mistreated by an authority, the possibility to object and to force a review of an administrative act without going to court. The prerequisites to open the public law remedy are listed in § 40 I VwGO. Therefore, it is necessary to have the existence of a conflict in public law[28] without any constitutional aspects[29] and no assignment to another jurisdiction.[30]

The social security code (Sozialgesetzbuch [SGB]) and the general fiscal law are less important for the administrative law. They supplement the VwVfG and the VwGO in the fields of taxation and social legislation, such as social welfare or financial support for students (BaFÖG) etc.

The special administrative law consists of various laws. Each special sector has its own law. The most important ones are the

In addition, Netherlands General Administrative Law Act (GALA) is a rather good sample of procedural laws in Europe 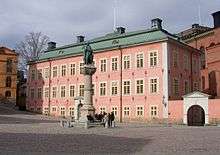 The Stenbockska Palace is the seat of the Supreme Administrative Court of Sweden.

As a homogeneous legal substance isolated in a system of jurisprudence, the administrative law of Ukraine is characterized as: (1) a branch of law; (2) a science; (3) a discipline.[36]

Generally speaking, most countries that follow the principles of common law have developed procedures for judicial review that limit the reviewability of decisions made by administrative law bodies. Often these procedures are coupled with legislation or other common law doctrines that establish standards for proper rulemaking. Administrative law may also apply to review of decisions of so-called semi-public bodies, such as non-profit corporations, disciplinary boards, and other decision-making bodies that affect the legal rights of members of a particular group or entity.

The scope of judicial review may be limited to certain questions of fairness, or whether the administrative action is ultra vires. In terms of ultra vires actions in the broad sense, a reviewing court may set aside an administrative decision if it is unreasonable (under Canadian law, following the rejection of the "Patently Unreasonable" standard by the Supreme Court in Dunsmuir v. New Brunswick), Wednesbury unreasonable (under British law), or arbitrary and capricious (under U.S. Administrative Procedure Act and New York State law). Administrative law, as laid down by the Supreme Court of India, has also recognized two more grounds of judicial review which were recognized but not applied by English Courts, namely legitimate expectation and proportionality.

The powers to review administrative decisions are usually established by statute, but were originally developed from the royal prerogative writs of English law, such as the writ of mandamus and the writ of certiorari. In certain Common Law jurisdictions, such as India or Pakistan, the power to pass such writs is a Constitutionally guaranteed power. This power is seen as fundamental to the power of judicial review and an aspect of the independent judiciary.

American administrative law often involves the regulatory activities of so-called "independent agencies", such as the Federal Trade Commission, whose headquarters is shown above.

In the United States, many government agencies are organized under the executive branch of government, although a few are part of the judicial or legislative branches.

Congress has also created some special judicial bodies known as Article I tribunals to handle some areas of administrative law.

The actions of executive agencies and independent agencies are the main focus of American administrative law. In response to the rapid creation of new independent agencies in the early twentieth century (see discussion below), Congress enacted the Administrative Procedure Act (APA) in 1946. Many of the independent agencies operate as miniature versions of the tripartite federal government, with the authority to "legislate" (through rulemaking; see Federal Register and Code of Federal Regulations), "adjudicate" (through administrative hearings), and to "execute" administrative goals (through agency enforcement personnel). Because the United States Constitution sets no limits on this tripartite authority of administrative agencies, Congress enacted the APA to establish fair administrative law procedures to comply with the constitutional requirements of due process. Agency procedures are drawn from four sources of authority: the APA, organic statutes, agency rules, and informal agency practice. It is important to note, though, that agencies can only act within their congressionally delegated authority,[37] and must comply with the requirements of the APA.

The American Bar Association's official journal concerning administrative law is the Administrative Law Review, a quarterly publication that is managed and edited by students at the Washington College of Law.

Stephen Breyer, a U.S. Supreme Court Justice since 1994, divides the history of administrative law in the United States into six discrete periods, according to his book, Administrative Law & Regulatory Policy (3d Ed., 1992):

The agricultural sector is one of the most heavily regulated sectors in the U.S. economy, as it is regulated in various ways at the international, federal, state, and local levels. Consequently, administrative law is a significant component of the discipline of Agricultural Law. The United States Department of Agriculture and its myriad agencies such as the Agricultural Marketing Service are the primary sources of regulatory activity, although other administrative bodies such as the Environmental Protection Agency play a significant regulatory role as well.