In regulatory jurisdictions that provide for this (a list including most or all developed countries with free market economies) consumer protection is a group of laws and organizations designed to ensure the rights of consumers as well as fair trade, competition and accurate information in the marketplace. The laws are designed to prevent the businesses that engage in fraud or specified unfair practices from gaining an advantage over competitors. They may also provide additional protection for those most vulnerable in society. Consumer protection laws are a form of government regulation that aim to protect the rights of consumers. For example, a government may require businesses to disclose detailed information about products—particularly in areas where safety or public health is an issue, such as food.

A consumer is defined as someone who acquires goods or services for direct use or ownership rather than for resale or use in production and manufacturing.[1]

Consumer interests can also be protected by promoting competition in the markets which directly and indirectly serve consumers, consistent with economic efficiency, but this topic is treated in competition law.

Consumer protection law or consumer law is considered an area of law that regulates private law relationships between individual consumers and the businesses that sell those goods and services. Consumer protection covers a wide range of topics, including but not necessarily limited to product liability, privacy rights, unfair business practices, fraud, misrepresentation, and other consumer/business interactions.

It's a way of preventing fraud and scams from service and sales contracts, bill collector regulation, pricing, utility turnoffs, consolidation, personal loans that may lead to bankruptcy.

The following lists consumer legislation at the nation-state level. In the EU member states Germany and the United Kingdom there is also the applicability of law at the EU level to be considered; this applies on the basis of subsidiarity.

In Australia, the corresponding agency is the Australian Competition and Consumer Commission or the individual State Consumer Affairs agencies. The Australian Securities and Investments Commission has responsibility for consumer protection regulation of financial services and products. However, in practice it does so through privately run EDR schemes such as the Financial Ombudsman Service (Australia).

When issuing public warnings about products and services, the issuing authority has to take into account that this affects the supplier's constitutionally protected economic liberty, see Bundesverwaltungsgericht (Federal Administrative Court) Case 3 C 34.84, 71 BVerwGE 183).

In India The Consumer protection act, 1986 is governing consumer protection. Under this law, Separate Consumer Dispute Redress Forums have been set up throughout India in each and every district in which a consumer [complaint can be filed by both the consumer of a goods as well as of the services] can file his complaint on a simple paper with nominal court fees and his complaint will be decided by the Presiding Officer of the District Level. Appeal could be filed to the State Consumer Disputes Redress Commissions and after that to the National Consumer Disputes Redressal Commission (NCDRC). The procedures in these tribunals are relatively less formal and more people friendly and they also take less time to decide upon a consumer dispute[2] when compared to the years long time taken by the traditional Indian judiciary. In recent years, many effective judgment have been passed by some state and National Consumer Forums. The Contract Act of 1982 act lays down the conditions in which promises made by parties to a contract will be legally binding on each other.It also lays down the remedies available to aggregate party if the other party fails to honour his promise. The Sale of Goods Act of 1930 act provides some safeguards to buyers of goods if goods purchased do not fulfill the express or implied conditions and warranties. The Agriculture Produce Act of 1937 act provides grade standards for agricultural commodities and live stock products.It specifies the conditions which govern the use of standards and lays down the procedure for grading, marking and packaging of agricultural produce.The quality mark provided under the act(Troy Kidige) is known as AGMARK-Agricultural Marketing

Modern Taiwanese law has been heavily influenced by European civil law systems, particularly German and Swiss law. The Civil Code in Taiwan contains five books: General Principles, Obligations, Rights over Things, Family, and Succession. The second book of the Code, the Book of Obligations, provided the basis from which consumers could bring products liability actions prior to the enactment of the CPL.[3]

The Consumer Protection Law (CPL) in Taiwan, as promulgated on January 11, 1994 and effective on January 13, 1993, specifically protects the interests and safety of customers using the products or services provided by business operators. The Consumer Protection Commission of Executive Yuan serves as an ombudsman supervising, coordinating, reporting any unsafe products/services and periodically reviewing the legislation.

According to the Pacific Rim Law & Policy Association and the American Chamber of Commerce, in a 1997 critical study, the law has been criticized by stating that "although many agree that the intent of the CPL is fair, the CPL's various problems, such as ambiguous terminology, favoritism towards consumer protection groups, and the compensation liability defense, must be addressed before the CPL becomes a truly effective piece of legislation that will protect consumers"[4]

The United Kingdom, as a member state of the European Union, is bound by the consumer protection directives of the European Union; residents may be directly bound by EU regulations. Specifics of the division of labour between the EU and the UK are detailed here.[5] Domestic (UK) laws originated within the ambit of contract and tort but, with the influence of EU law, it is emerging as an independent area of law. In many circumstances, where domestic law is in question, the matter judicially treated as tort, contract, restitution or even criminal law.

Consumer Protection issues are dealt with when complaints are made to the Director-General of Fair Trade. The Office of Fair Trading[6] will then investigate, impose an injunction or take the matter to litigation. However, consumers cannot directly complain to the OFT. Complaints need to be made to the Citizens Advice Consumer Service (which has taken over from Consumer Direct) who will provide legal advice to complainants, or re-direct the individual complaint to Trading Standards for investigation. Due to restrictions within the Enterprise Act 2002, individual complainants are unable to be told whether their case is being investigated or not. In very rare cases, Consumer Direct may direct a very large number of complaints to the OFT to be considered as a systemic complaint. The OFT can also be engaged by consumer groups e.g. The Consumers Association or the statutory consumer protection body – Consumer Focus – via a super complaint. The OFT rarely prosecute companies, however, preferring a light touch regulation approach. Consumer complaints against companies are not published, but investigation work, undertakings and enforcements are located at.[7] Many of the consumer protection laws e.g. Distance Selling Regulations 2000 or Unfair Terms in Consumer Contracts Regulations 1999 (15 years ago) are actually UK implementations of EU directives. The OFT is one of the bodies responsible for enforcing these rules. This leads to a problem in that these examples of legislation are clearly designed to deal with individual complaints but the OFT will only deal with systemic complaints and will ignore individual complainants redirecting them back to Consumer Direct.

The Office of Fair Trading also acts as the UK's official consumer and competition watchdog, with a remit to make markets work well for consumers, and at a local, municipal level by Trading Standards departments. General consumer advice can be obtained from the Citizens Advice Consumer Service or via a local branch of the Citizen's Advice Bureau. 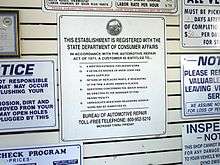 Consumer protection laws often mandate the posting of notices, such as this one which appears in all automotive repair shops in California

In the United States a variety of laws at both the federal and state levels regulate consumer affairs. Among them are the federal Federal Food, Drug, and Cosmetic Act, Fair Debt Collection Practices Act, the Fair Credit Reporting Act, Truth in Lending Act, Fair Credit Billing Act, and the Gramm-Leach-Bliley Act. Federal consumer protection laws are mainly enforced by the Federal Trade Commission, the Consumer Financial Protection Bureau, the Food and Drug Administration, and the U.S. Department of Justice.

At the state level, many states have adopted the Uniform Deceptive Trade Practices Act including, but not limited to, Delaware, Illinois, Maine, and Nebraska. The deceptive trade practices prohibited by the Uniform Act can be roughly subdivided into conduct involving either a) unfair or fraudulent business practice and b) untrue or misleading advertising. The Uniform Act contains a private remedy with attorneys fees for prevailing parties where the losing party "willfully engaged in the trade practice knowing it to be deceptive". Uniform Act §3(b). Missouri has a similar statute called the Merchandising Practices Act. This statute allows local prosecutors or the Attorney General to press charges against people who knowingly use deceptive business practices in a consumer transaction and authorizes consumers to hire a private attorney to bring an action seeking their actual damages, punitive damages, and attorney's fees.[8]

Also, the majority of states have a Department of Consumer Affairs devoted to regulating certain industries and protecting consumers who use goods and services from those industries.[9] For example, in California, the California Department of Consumer Affairs regulates about 2.3 million professionals in over 230 different professions, through its forty regulatory entities. In addition, California encourages its consumers to act as private attorneys general through the liberal provisions of its Consumers Legal Remedies Act,

California has the strongest consumer protection laws of any US state, partly because of rigorous advocacy and lobbying by groups such as Utility Consumers' Action Network, Consumer Federation of California and Privacy Rights Clearinghouse.

Other states have been the leaders in specific aspects of consumer protection. For example, Florida, Delaware and Minnesota have legislated requirements that contracts be written at reasonable readability levels as a large proportion of contracts cannot be understood by most consumers who sign them.[10]

47 national constitutions currently in force include some sort of consumer right.[11] The Constitute project lists the text of each of these provisions here.[12] Kenya's provision, for example, suggests that citizens have the right to (1) goods and services of "reasonable quality." (2) information about the product, and (3) protection of their health and safety in the use of the product. The Kenyan rule also stipulates that citizens would have legal recourse in the case of injury or product defects.