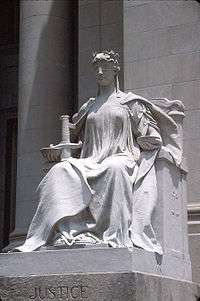 The judiciary (also known as the judicial system or court system) is the system of courts that interprets and applies the law in the name of the state. The judiciary also provides a mechanism for the resolution of disputes. In some nations, under doctrines of separation of powers, the judiciary generally does not make law (which is the responsibility of the legislature) or enforce law (which is the responsibility of the executive), but rather interprets law and applies it to the facts of each case. In other nations, the judiciary can make law, known as Common Law, by setting precedent for other judges to follow, as opposed to Statutory Law made by the legislature. The Judiciary is often tasked with ensuring equal justice under law.

In many jurisdictions the judicial branch has the power to change laws through the process of judicial review. Courts with judicial review power, may annul the laws and rules of the state when it finds them incompatible with a higher norm, such as primary legislation, the provisions of the constitution or international law. Judges constitute a critical force for interpretation and implementation of a constitution, thus de facto in common law countries creating the body of constitutional law. For a people to establish and keep the 'Rule of Law' as the operative norm in social constructs great care must be taken in the election and/or appointment of unbiased and thoughtful legal scholars whose loyalty to an oath of office is without reproach. If law is to govern and find acceptance generally courts must exercise fidelity to justice which means affording those subject to its jurisdictional scope the greatest presumption of inherent cultural relevance within this framework.

In the US during recent decades the judiciary became active in economic issues related with economic rights established by constitution because "economics may provide insight into questions that bear on the proper legal interpretation".[3] Since many countries with transitional political and economic systems continue treating their constitutions as abstract legal documents disengaged from the economic policy of the state, practice of judicial review of economic acts of executive and legislative branches have begun to grow.

In the 1980s, the Supreme Court of India for almost a decade had been encouraging public interest litigation on behalf of the poor and oppressed by using a very broad interpretation of several articles of the Indian Constitution.[4]

Budget of the judiciary in many transitional and developing countries is almost completely controlled by the executive. The latter undermines the separation of powers, as it creates a critical financial dependence of the judiciary. The proper national wealth distribution including the government spending on the judiciary is subject of the constitutional economics. It is important to distinguish between the two methods of corruption of the judiciary: the state (through budget planning and various privileges), and the private.[5]

The term "judiciary" is also used to refer collectively to the personnel, such as judges, magistrates and other adjudicators, who form the core of a judiciary (sometimes referred to as a "bench"), as well as the staffs who keep the system running smoothly.

In some countries and jurisdictions, judiciary branch is expanded to include additional public legal professionals and institutions such as prosecutors, state lawyers, ombudsmen, public notaries, judicial police service and legal aid officers. These institutions are sometimes governed by the same judicial administration that governs courts, and in some cases the administration of the judicial branch is also the administering authority for private legal professions such as lawyers and private notary offices.

After the French Revolution, lawmakers stopped interpretation of law by judges, and the legislature was the only body permitted to interpret the law; this prohibition was later overturned by the Napoleonic Code.[6]

In civil law jurisdictions at present, judges interpret the law to about the same extent as in common law jurisdictions – however it is different from the common law tradition which directly recognizes the limited power to make law. For instance, in France, the jurisprudence constante of the Court of Cassation or the Council of State is equivalent in practice with case law. However, the Louisiana Supreme Court notes the principal difference between the two legal doctrines: a single court decision can provide sufficient foundation for the common law doctrine of stare decisis, however, "a series of adjudicated cases, all in accord, form the basis for jurisprudence constante."[7] Moreover, the Louisiana Court of Appeals has explicitly noted that jurisprudence constante is merely a secondary source of law, which cannot be authoritative and does not rise to the level of stare decisis.[8]

Japan's process for selecting judges is longer and more stringent than the process in the United States and in Mexico.[12] Assistant judges are appointed from those who have completed their training at the Legal Training and Research Institute located in Wako. Once appointed, assistant judges still may not qualify to sit alone until they have served for five years, and have been appointed by the Supreme Court of Japan. Judges require ten years of experience in practical affairs, as a public prosecutor or practicing attorney. In the Japanese judicial branch there is the Supreme Court, eight high courts, fifty district courts, fifty family courts, and 438 summary courts.[13][14]