This article is about the Port of Los Angeles. For the Los Angeles-Long Beach Harbor residential areas, see Los Angeles Harbor Region.

The Port of Los Angeles, also called America's Port, is a port complex that occupies 7,500 acres (3,000 ha) of land and water along 43 miles (69 km) of waterfront and adjoins the separate Port of Long Beach. The port is located in San Pedro Bay in the San Pedro and Wilmington neighborhoods of Los Angeles, approximately 20 miles (32 km) south of downtown. A department of the City of Los Angeles, the Port of Los Angeles employs nearly 896,000 people throughout the LA County Region and 3.6 million worldwide. Around $1.2 billion worth of cargo comes in and out each day at the LA Port. The Port's Channel Depth is 53 feet (16 m). The port has 23 cargo terminals, 270 deepwater berths, 77 container cranes, 9 container terminals, and 113 miles (182 km) of on-port rail. The LA Port imports furniture, footwear, electronics, automobile parts, and apparel. The Port exports wastepaper, cotton, resins, animal feed, and scrap metal. The port's major trading partners are China, Hong Kong, Japan, South Korea, Taiwan, and Vietnam.[3][4][5] For public safety, the Port of Los Angeles utilizes the Los Angeles Port Police for police service in the port and to its local communities, the Los Angeles Fire Department (LAFD) to provide fire and EMS services to the port and its local communities, the U.S. Coast Guard for water way security at the port, Homeland Security to protect federal land at the port and the Los Angeles County Lifeguards to provide lifeguard services for inner Cabrillo Beach.

In 1542, Juan Rodriquez Cabrillo discovered the "Bay of Smokes."[6] The south-facing San Pedro Bay was originally a shallow mudflat, too soft to support a wharf. Visiting ships had two choices: stay far out at anchor and have their goods and passengers ferried to shore, or beach themselves. That sticky process is described in Two Years Before the Mast by Richard Henry Dana, Jr., who was a crew member on an 1834 voyage that visited San Pedro Bay. Phineas Banning greatly improved shipping when he dredged the channel to Wilmington in 1871 to a depth of 10 feet (3.0 m). The port handled 50,000 tons of shipping that year. Banning owned a stagecoach line with routes connecting San Pedro to Salt Lake City, Utah, and Yuma, Arizona, and in 1868 he built a railroad to connect San Pedro Bay to Los Angeles, the first in the area. 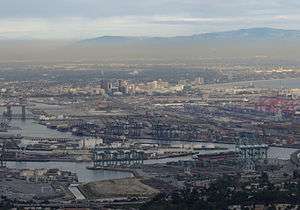 After Banning's death in 1885, his sons pursued their interests in promoting the port, which handled 500,000 tons of shipping in that year. The Southern Pacific Railroad and Collis P. Huntington wanted to create Port Los Angeles at Santa Monica and built the Long Wharf there in 1893. However, the Los Angeles Times publisher Harrison Gray Otis and U.S. Senator Stephen White pushed for federal support of the Port of Los Angeles at San Pedro Bay. The Free Harbor Fight was settled when San Pedro was endorsed in 1897 by a commission headed by Rear Admiral John C. Walker (who later went on to become the chair of the Isthmian Canal Commission in 1904). With U.S. government support, breakwater construction began in 1899, and the area was annexed to Los Angeles in 1909. The Los Angeles Board of Harbor Commissioners was founded in 1907.

In 1912 the Southern Pacific Railroad completed its first major wharf at the port. During the 1920s, the port surpassed San Francisco as the West Coast's busiest seaport. In the early 1930s, a massive expansion of the port was undertaken with the construction of a breakwater three miles out and over two miles in length. In addition to the construction of this outer breakwater, an inner breakwater was built off Terminal Island with docks for seagoing ships and smaller docks built at Long Beach.[7] It was this improved harbor that hosted the sailing events for the 1932 Summer Olympics.[8] During World War II the port was primarily used for shipbuilding, employing more than 90,000 people. In 1959, Matson Navigation Company's Hawaiian Merchant delivered 20 containers to the port, beginning the port's shift to containerization.[9] The opening of the Vincent Thomas Bridge in 1963 greatly improved access to Terminal Island and allowed increased traffic and further expansion of the port. In 1985, the port handled one million containers in a year for the first time.[6] In 2000, the Pier 400 Dredging and Landfill Program, the largest such project in America, was completed.[6][10] By 2013, more than half a million containers were moving through the Port every month.[11] 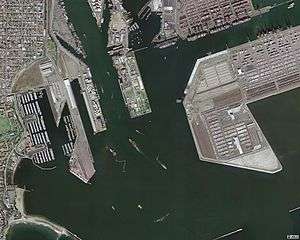 USGS Satellite picture of a portion of the Port of Los Angeles, including Pier 400, Reservation Point, and port facilities in San Pedro, March 29, 2004

The port district is an independent, self-supporting department of the government of the City of Los Angeles. The port is under the control of a five-member Board of Harbor Commissioners appointed by the mayor and approved by the city council, and is administered by an executive director. The port maintains an AA bond rating,[12] the highest rating attainable for self-funded ports.

The port has about a dozen pilots, including two chiefs. Pilots have specialized knowledge of the harbor and San Pedro Bay. They meet the ships waiting to enter the harbor and provide advice as the vessel is steered through the congested waterway to the dock.[13]

The port's container volume was 7.9 million twenty-foot equivalent units (TEU) in calendar year 2013. The port is the busiest port in the United States by container volume, the 16th-busiest container port in the world, and the 9th-busiest worldwide when combined with the neighboring Port of Long Beach. The port is also the number-one freight gateway in the United States when ranked by the value of shipments passing through it.[14] For the second consecutive year, the Port of Los Angeles experienced record-breaking exports as outbound container volumes surged in 2010 and 2011. Its top trading partners in 2013 were:

The most-imported types of goods in the 2013 calendar year were, in order: furniture, automobile parts, apparel, electronic products, and footwear.

During the 2002 West Coast port labor lockout, the port had a large backlog of ships waiting to be unloaded at any given time. Many analysts believe that the port's traffic may have exceeded its physical capacity as well as the capacity of local freeway and railroad systems. The chronic congestion at the port caused ripple effects throughout the American economy, such as disrupting just-in-time inventory practices at many companies.

The port is served by the Pacific Harbor Line (PHL) railroad. From the PHL, intermodal railroad cars go north to Los Angeles via the Alameda Corridor.

In 2011, no American port could handle ships of the PS-class Emma Mærsk and the future Maersk Triple E class size,[15] the latter of which needs cranes reaching 23 rows.[16] In 2012, the port and the U.S. Army Corps of Engineers deepened the port's main navigational channel to 53 feet, which is deep enough to accommodate the draft of the world's biggest container ships.[17][18] However, Maersk had no plans in 2014 to bring those ships to America.[19] 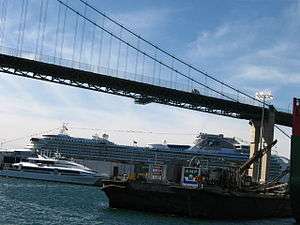 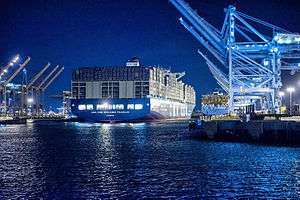 Located in the San Pedro District beneath the Vincent Thomas Bridge, The Port of Los Angeles hosts recreational transportation with the largest cruise ship terminal on the West Coast of the United States. The Port's World Cruise Center has three passenger ship berths transporting over 1 million passengers annually. It is claimed to be "the nation's most secure cruise passenger complex". Its vast 2,560-space long-term parking lot is patrolled continuously by port security. Courtesy shuttles transport passengers with their luggage between the parking lot and the terminal complex on arrival and departure days. The cruise center accommodates a wide variety of transportation, including rental car, tour bus, limousine and taxi services. It is linked to the waterfront attractions USS Iowa Museum and Los Angeles Maritime Museum by a pedestrian promenade featuring public art and fountains, as well as connections to the Cabrillo Marine Aquarium and other San Pedro attractions using the Waterfront Red Car trolley/shuttle.

The Queen Mary 2 is the largest cruise ship ever to sail from Los Angeles.[20]

The LA Waterfront[21] is a visitor-serving destination in the city of Los Angeles, funded and maintained by the Port of Los Angeles. In 2009, the Los Angeles Harbor Commission approved the San Pedro Waterfront and Wilmington Waterfront development programs, under the LA Waterfront umbrella. The LA Waterfront consists of a series of waterfront development and community enhancement projects covering more than 400 acres of existing Port of Los Angeles property in both San Pedro and Wilmington. With miles of public promenade and walking paths, acres of open space and scenic views, the LA Waterfront attracts thousands of visitors annually. Remodel and reconstruction was approved by the Los Angeles City Council. Development is set to be completed in 2020. Construction is expected to begin in 2017 at a partial project cost of $90 million, paid by the developer. The San Pedro Public Market is expected to open in 2020, with demolition beginning as early as November 2016.[22]

The $2.8 million San Pedro Bay Ports Clean Air Action Program (CAAP) initiative was implemented by the Board of Harbor Commissioners in October 2002 for terminal and ship operations programs targeted at reducing polluting emissions from vessels and cargo handling equipment . To accelerate implementation of emission reductions through the use of new and cleaner-burning equipment, the port has allocated more than $52 million in additional funding for the CAAP through 2008.

As of May, 2016, the Lost Angeles Port has already surpassed its initial 2023 emission goals 8 years ahead of predicted time frame. The dramatic success to reduce emissions has seen a decrease in diesel particulate matter reduce 85%, sulfur oxides by 97%, and nitrogen oxide by 52% so far. The CAAP program was updated to 3.0 after this environmental successes of the initiatives. With the recent ramification of environment goals the updates will look to reduce the emissions through efficient supply chain optimization. There has also been recent developments to increase port technologies advancement to promote the development of efficient and green port technologies. The CAAP also looks to be the lead role caretaker of fostering and improving the wildlife and ecosystem of the port.[26]

The port installed the first Alternative Maritime Power (AMP) berth in 2004 and can provide up to 40 MW of grid power to two cruise ships simultaneously at both 6.6 kV and 11 kV, as well as three container terminals, reducing pollution from ship engines.[27]

In an effort to buffer the nearby community of Wilmington from the port, in June 2011 the Wilmington Waterfront Park was opened.[28][29]