Iranian pop music refers to pop music originated in Iran, with songs mainly in Persian and other regional languages of the country.

The origin of Iranian pop music dates back to the time of the 19th-century Qajar dynasty.[1] Following the invent of radio in 1930, and after World War II, a form of popular music emerged and began to develop in Iran. 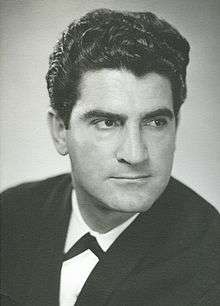 Viguen, known as "the Sultan of Persian Pop and Jazz", was one of the most prominent and successful artists who emerged by the beginning of this period.[2] He was of Armenian origin, and sang in both Persian and Armenian.

By the 1970s, a new wave was formed in Iranian pop music, using indigenous instruments and adding electric guitar and other imported characteristics.

Parviz Maghsadi and Varoujan Hakhbandian were among pioneer composers who wrote and composed songs for famous singers such as Viguen, Googoosh, Dariush, and Farhad.[3]

After the 1979 Revolution, pop music was banned and completely disappeared from the scene in Iran.[4]

Many Iranians immigrated to foreign countries, especially to Los Angeles in the United States, and many continued to sing in exile. Since then, several popular Iranian TV channels and radio stations operate outside of the country, aired through various satellites. These broadcast companies play an important role in promoting and connecting Iranian pop artists to Iranians living all over the world.[5]

In the 1990s, officials of the new government decided to produce and promote a "decent" pop music, in order to compete with the abroad and unofficial sources of Iranian music. Ali Moallem (poet)[6] and Fereydoun Shahbazian (musician) headed a council at the IRIB that supervised the revival of domestic pop music.[7]

Shadmehr Aghili was one of the first post-revolutionary Iranian singers who received significant support, including promotion by national television, to produce new Persian pop songs inside Iran. He was highly skilled at playing violin and guitar, and was a very talented singer. He became a very successful and popular musician and singer in Iran, but eventually immigrated to Canada and then moved to Los Angeles, continuing his career outside of Iran.

Under the presidency of Khatami, as a result of easing cultural restrictions within Iran, a number of new pop singers emerged from within the country.[8][4] Since the new administration took office, the Ministry of Ershad adopted a different policy, mainly to make it easier to monitor the industry. The newly adopted policy included loosening restrictions for a small number of artists, while tightening it for the rest. However, the number of album releases increased.

Arian, the first officially sanctioned pop music band with female singers in post-revolutionary Iran, started a new chapter of Iranian pop music.[9] They had a cooperation with the well-known British-Irish singer Chris de Burgh in their fourth album Bi to, Ba to,[10] and were the first Iranian band to be featured in the English biographical dictionary and directory of International Who's Who in Music.

In late 2009, Sirvan Khosravi became the first domestic Iranian artist to achieve high-rotation airplay on a regular European radio station.[11] He made his debut with the song Saat-e 9 ("9 O'Clock"),[12] which also made headlines in Iranian online media.[13] In August 2010, Farzad Farzin made his debut European chart with the song Chike Chike ("Trickle Trickle") from his third legal album Shans ("Chance").[14]