In humans, the respiratory tract is the part of the anatomy involved with the process of respiration. 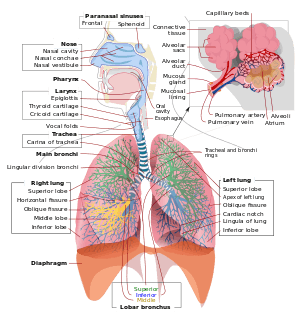 The respiratory tract can also be divided into a conducting zone and a respiratory zone, based on the distinction of transporting gases versus exchanging them.

From the bronchi, the dividing tubes become progressively smaller with an estimated 20 to 23 divisions before ending at an alveolus. 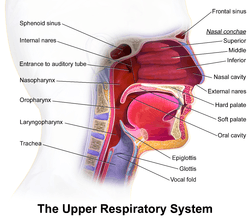 The upper respiratory tract, can refer to the parts of the respiratory system lying above the sternal angle (outside of the thorax),[1] above the glottis (vocal cords), or above the cricoid cartilage.[2][3] The larynx is sometimes included in both the upper and lower airways.[4] The larynx is also called the voice box and has the associated cartilage that produces sound. The tract consists of the nasal cavity and paranasal sinuses, the pharynx (nasopharynx, oropharynx and laryngopharynx) and sometimes includes the larynx.

The lower respiratory tract or lower airway is derived from the developing foregut and consists of the trachea, bronchi (primary, secondary and tertiary), bronchioles (including terminal and respiratory), and lungs (including alveoli.[5] It also sometimes includes the larynx. 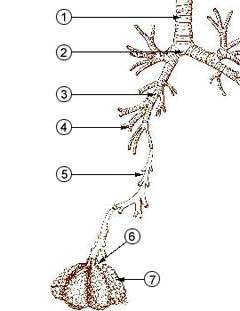 The respiratory tree or tracheobronchial tree is a term also used to refer to the branching structure of airways supplying air to the lungs and includes the trachea, bronchi and bronchioles.

At each division point or generation, one airway branches into two or more smaller airways. The human respiratory tree may consist on average of 23 generations, while the respiratory tree of the mouse has up to 13 generations. Proximal divisions (those closest to the top of the tree, such as the bronchi) mainly function to transmit air to the lower airways. Later divisions including the respiratory bronchiole, alveolar ducts and alveoli, are specialized for gas exchange.

The trachea is the largest tube in the respiratory tract and consists of tracheal rings of hyaline cartilage. It branches off into two bronchial tubes, a left and a right main bronchus. The bronchi branch off into smaller sections inside the lungs, called bronchioles. These bronchioles give rise to the air sacs in the lungs called the alveoli.[6]

The lungs are the largest organs in the lower respiratory tract. The lungs are suspended within the pleural cavity of the thorax. The pleurae are two thin membranes, one cell layer thick, which surrounds the lungs. The inner (visceral pleura) covers the lungs and the outer (parietal pleura) lines the inner surface of the chest wall. This membrane secretes a small amount of fluid, allowing the lungs to move freely within the pleural cavity while expanding and contracting during breathing. The lungs are divided into different lobes. The right lung is larger in size than the left, because of the heart's being situated to the left of the midline. The right lung has three lobes - upper, middle, and lower (or superior, middle and inferior), and the left lung has two - upper and lower (or superior and inferior), plus a small tongue-shaped portion of the upper lobe known as the lingula. Each lobe is further divided up into segments called bronchopulmonary segments. Each lung has a costal surface, which is adjacent to the ribcage; a diaphragmatic surface, which faces downward toward the diaphragm; and a mediastinal surface, which faces toward the center of the chest, and lies against the heart, great vessels, and the carina where the two mainstem bronchi branch off from the base of the trachea.

The alveoli are tiny air sacs in the lungs where gas exchange takes place. There are “about 150 million per lung”. (1) When the diaphragm contracts, a negative pressure is generated in the thorax and air rushes in to fill the cavity. When that happens, these sacs fill with air, making the lung expand. The alveoli are rich with capillaries, called alveolor capillaries. Here the red blood cells absorb oxygen from the air and then carry it back in the form of oxyhaemaglobin, to nourish the cells. The red blood cells also carry carbon dioxide (CO2) away from the cells in the form of carboxyhemoglobin and releases it into the alveoli through the alveolor capillaries. When the diaphragm relaxes, a positive pressure is generated in the thorax and air rushes out of the alveoli expelling the carbon dioxide (CO2). 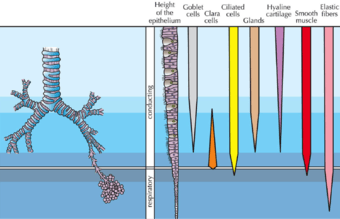 This image compares the histological differences along the respiratory tract. 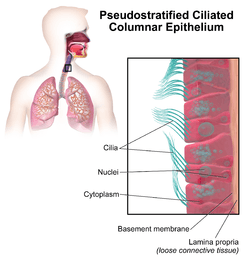 The respiratory tract is covered in epithelium, which varies down the tract. There are glands and mucus produced by goblet cells in parts, as well as smooth muscle, elastin or cartilage.

Most of the epithelium (from the nose to the bronchi) is covered in ciliated pseudostratified columnar epithelium, commonly called respiratory epithelium.[8] The cilia beat in one direction, moving mucus towards the throat where it is swallowed. Moving down the bronchioles, the cells get more cuboidal in shape but are still ciliated.

Cartilage is present until the small bronchi. In the trachea they are C-shaped rings of hyaline cartilage, whereas in the bronchi the cartilage takes the form of interspersed plates.

Glands are abundant in the upper respiratory tract, but there are fewer lower down and they are absent starting at the bronchioles. The same goes for goblet cells, although there are scattered ones in the first bronchioles.

Smooth muscle starts in the trachea, where it joins the C-shaped rings of cartilage. It continues down the bronchi and bronchioles, which it completely encircles.

Instead of hard cartilage, the bronchi and bronchioles are composed of elastic tissue.

Most of the respiratory tract exists merely as a piping system for air to travel in the lungs, and alveoli are the only part of the lung that exchanges oxygen and carbon dioxide with the blood.

Even though the cross-sectional area of each bronchus or bronchiole is smaller, because there are so many, the total surface area is larger. This means there is less resistance at the terminal bronchioles. (Most resistance is around the 3-4 division from the trachea due to turbulence.)

When a human being inhales, air travels down the trachea, through the bronchial tubes, and into the lungs. The entire tract is protected by the rib cage, spinal cord, and sternum bone. In the lungs, oxygen from the inhaled air is transferred into the blood and circulated throughout the body. Carbon dioxide (CO2) is transferred from returning blood back into gaseous form in the lungs and exhaled through the lower respiratory tract and then the upper, to complete the process of breathing.

Unlike the trachea and bronchi, the upper airway is a collapsible, compliant tube. As such, it has to be able to withstand suction pressures generated by the rhythmic contraction of the diaphragm that sucks air into the lungs. This is accomplished by the rhythmic contraction of upper airway muscles, such as the genioglossus (tongue) and the hyoid muscles. In addition to rhythmic innervation from the respiratory center in the medulla oblongata, the motoneurons controlling the muscles also receive tonic innervation that sets a baseline level of stiffness and size.

The diaphragm is the primary muscle that allows for lung expansion and contraction. Smaller muscles between the ribs assist with this process.

The human trachea has a membrane lining that produces a layer of mucus that helps filter waste that an organism breathes in through the air. There is also a small lining of tiny hairs in our lungs called cilia. These tiny hairs act as a filter in our lungs and control the amount of mucus that enters our lungs. The reason why we cough is because the cilia push up the mucus, so not too much enters our lungs. If these hairs are not functioning properly, an organism is at risk of a lower respiratory tract infection.

The cilia of the respiratory epithelium beat in concert cranially, effectively moving secreted mucus containing trapped foreign particles toward the laryngopharynx, for either expectoration or swallowing to the stomach where the acidic pH helps to neutralize foreign material and micro-organisms. This system is collectively known as the mucociliary escalator and serves two functions: to keep the lower respiratory tract sterile, and to prevent mucus accumulation in the lungs.

The mucocilliary escalator is vital for the movement of mucus up the respiratory tract to the pharynx. The mucus layer is biphasic with a serous, sol layer in which the cilia beat and, above this, a viscoelastic or gel layer. Due to the viscous properties of this upper mucous layer, the tips of the cilia catch in the layer, which may contain particulate matter, and drag it cranially toward the laryngopharynx.

The respiratory tract is a common site for infections.

Upper respiratory tract infections are probably the most common infections in the world.

Some of these infections have environmental factors such as smoking. When you inhale a tobacco product, the smoke paralyzes the cilia, causing mucus to enter the lungs. If you smoke frequently, over time these cilia hairs die, and can no longer filter mucus. Tar from the smoke inhaled enters your lungs, turning the pink-coloured lungs black. The accumulation of this tar could eventually lead to lung cancer, emphysema or chronic obstructive pulmonary disease.(5)

This is a common lower respiratory disease that can be caused by exposure to harmful chemicals, or prolonged use of tobacco. This disease is chronic and progressive, the damage to your lungs is irreversible and eventually fatal. This disease destroys the alveoli, and lung tissue. Damage to these air sacs, and tissue makes breathing very difficult, causing shortness in breath, hyperventilation, and raised chest. The decreased amount of alveoli causes loss of oxygen (O2) to the lungs, and more accumulation of carbon monoxide (CO). There are two types of emphysema: primary and secondary. Primary emphysema can be found in younger adults. This type of emphysema deteriorates the air sacs, and lung mass. Secondary emphysema can be found in older adults who smoke/have smoked and have a history of chronic bronchitis.(5)

Bronchitis is another common infection that takes place in the lower respiratory tract. It is an inflammation of the bronchial tubes. There are two forms of this infection: acute bronchitis, which is treatable and can go away without treatment, or chronic bronchitis, which comes and goes, but will always affect one's lungs. Bronchitis increases the amount of mucus that is natural in your respiratory tract. Chronic bronchitis is common in smokers, because the tar from smoking accumulates over time, causing the lungs to work harder to repair themselves. (7)

Tuberculosis is one of many other infections that occurs in the lower respiratory tract. You can contract this infection from airborne droplets, and if inhaled you are at risk of this disease. This is a bacterial infection which deteriorates the lung tissue resulting in coughing up blood. (7) This infection is deadly if not treated.

Our bronchial tubes are the main passages to our right and left lungs. These tubes carry the oxygen (O2) to the bronchioles inside the lungs. If these tubes swell up, this is the result of asthma which could lead to an asthma attack. This results in wheezing, tightness of the chest and severe difficulty in breathing. There are different types of asthma that affect the functions of the bronchial tubes. Allergies can also set off an allergic reaction, causing swelling to the bronchial tubes; as a result, the air passage will swell up, or close up completely. (7)