This article is about chemical solutions. For solutions of equations, see Solution (equation). For other uses, see Solution (disambiguation).
"Solute" redirects here. For the sole order of the class Homoiostelea, see Solute (echinoderm). 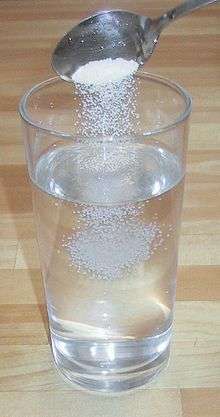 Making a saline water solution by dissolving table salt (NaCl) in water. The salt is the solute and the water the solvent.

In chemistry, a solution is a homogeneous mixture composed of two or more substances. In such a mixture, a solute is a substance dissolved in another substance, known as a solvent. The solution more or less takes on the characteristics of the solvent including its phase, and the solvent is commonly the major fraction of the mixture. The concentration of a solute in a solution is a measure of how much of that solute is dissolved in the solvent, with regard to how much solvent is present.

Homogeneous means that the components of the mixture form a single phase. Heterogeneous means that the components of the mixture are of different phase. The properties of the mixture (such as concentration, temperature, and density) can be uniformly distributed through the volume but only in absence of diffusion phenomena or after their completion. Usually, the substance present in the greatest amount is considered the solvent. Solvents can be gases, liquids or solids. One or more components present in the solution other than the solvent are called solutes. The solution has the same physical state as the solvent.

If the solvent is a gas, only gases are dissolved under a given set of conditions. An example of a gaseous solution is air (oxygen and other gases dissolved in nitrogen). Since interactions between molecules play almost no role, dilute gases form rather trivial solutions. In part of the literature, they are not even classified as solutions, but addressed as mixtures.

If the solvent is a liquid, then almost all gases, liquids, and solids can be dissolved. Here are some examples:

Counterexamples are provided by liquid mixtures that are not homogeneous: colloids, suspensions, emulsions are not considered solutions.

Body fluids are examples for complex liquid solutions, containing many solutes. Many of these are electrolytes, since they contain solute ions, such as potassium. Furthermore, they contain solute molecules like sugar and urea. Oxygen and carbon dioxide are also essential components of blood chemistry, where significant changes in their concentrations may be a sign of severe illness or injury.

If the solvent is a solid, then gases, liquids and solids can be dissolved.

All solutions have a positive entropy of mixing. The interactions between different molecules or ions may be energetically favored or not. If interactions are unfavorable, then the free energy decreases with increasing solute concentration. At some point the energy loss outweighs the entropy gain, and no more solute particles can be dissolved; the solution is said to be saturated. However, the point at which a solution can become saturated can change significantly with different environmental factors, such as temperature, pressure, and contamination. For some solute-solvent combinations a supersaturated solution can be prepared by raising the solubility (for example by increasing the temperature) to dissolve more solute, and then lowering it (for example by cooling).

Usually, the greater the temperature of the solvent, the more of a given solid solute it can dissolve. However, most gases and some compounds exhibit solubilities that decrease with increased temperature. Such behavior is a result of an exothermic enthalpy of solution. Some surfactants exhibit this behaviour. The solubility of liquids in liquids is generally less temperature-sensitive than that of solids or gases.

The physical properties of compounds such as melting point and boiling point change when other compounds are added. Together they are called colligative properties. There are several ways to quantify the amount of one compound dissolved in the other compounds collectively called concentration. Examples include molarity, volume fraction, and mole fraction.

The properties of ideal solutions can be calculated by the linear combination of the properties of its components. If both solute and solvent exist in equal quantities (such as in a 50% ethanol, 50% water solution), the concepts of "solute" and "solvent" become less relevant, but the substance that is more often used as a solvent is normally designated as the solvent (in this example, water).

In principle, all types of liquids can behave as solvents: liquid noble gases, molten metals, molten salts, molten covalent networks, and molecular liquids. In the practice of chemistry and biochemistry, most solvents are molecular liquids. They can be classified into polar and non-polar, according to whether their molecules possess a permanent electric dipole moment. Another distinction is whether their molecules can form hydrogen bonds (protic and aprotic solvents). Water, the most commonly used solvent, is both polar and sustains hydrogen bonds.

Water is a good solvent because the molecules are polar and capable of forming hydrogen bonds (1).

Salts dissolve in polar solvents, forming positive and negative ions that are attracted to the negative and positive ends of the solvent molecule, respectively. If the solvent is water, hydration occurs when the charged solute ions become surrounded by water molecules. A standard example is aqueous saltwater. Such solutions are called electrolytes.

An example for the immiscibility of oil and water is a leak of petroleum from a damaged tanker, that does not dissolve in the ocean water but rather floats on the surface.

It is common practice in laboratories to make a solution directly from its constituent ingredients. There are three cases in practical calculation:

In the following equations, A is solvent, B is solute, and C is concentration. Solute volume contribution is considered through ideal solution model.

Example: Make 2 g/100mL of NaCl solution with 1 L water Water (properties). The density of resulting solution is considered to be equal to that of water, statement holding especially for dilute solutions, so the density information is not required.