The Cinema of South India is used to refer collectively to the five film industries of South India, the Tamil, the Telugu, the Kannada, the Malayalam, and the Tulu film industries, as a single entity. They are based in Chennai, Hyderabad, Bengaluru, Kochi and Mangalore respectively.

Although developed independently for a long period of time, gross exchange of film performers and technicians as well as globalisation helped to shape this new identity, which competes with other film industries in the world. The largest industry are the Tamil and the Telugu film industries, which are responsible for 55% of all film revenues in South India as of 2013.[1] The industry is regulated by the South Indian Film Chamber of Commerce.

Early beginnings during the Madras Presidency

In 1897, a European exhibitor first screened a selection of silent short films at the Victoria Public Hall in Madras.[2] The films all featured non-fictional subjects; they were mostly photographed records of day-to-day events. In Madras (present-day Chennai), the Electric Theatre was established for the screening of silent films.[2] It was a favourite haunt of the British community in Madras. The theatre was shut down after a few years. This building is now part of a post office complex on Anna Salai (Mount Road). The Lyric Theatre was also built in the Mount Road area.[2] This venue boasted a variety of events, including plays in English, Western classical music concerts, and ballroom dances. Silent films were also screened as an additional attraction. Swamikannu Vincent, an employee of the South Indian Railways in Trichy, purchased a film projector and silent films from the Frenchman Du Pont and set up a business as film exhibitor.[3] He erected tents for screening films. His tent cinema became popular and he travelled all over the state with his mobile unit.[4] In later years, he produced talkies and also built a cinema in Coimbatore.[5]

To celebrate the event of King George V's visit in 1909, a grand exhibition was organised in Madras. Its major attraction was the screening of short films accompanied by sound. A British company imported a Crone megaphone, made up of a film projector to which a gramophone with a disc containing prerecorded sound was linked, and both were run in unison, producing picture and sound simultaneously. However, there was no synched dialogue. Raghupathy Venkiah Naidu, a successful photographer, took over the equipment after the exhibition and set up a tent cinema near the Madras High Court.[2] R. Venkiah, flush with funds, built in 1912 a permanent cinema in the Mount Road area named Gaiety Theatre. It was the first in Madras to screen films on a full-time basis. The theatre later closed for commercial developments.[6]

Swamikannu Vincent, who had built the first cinema of South India in Coimbatore, introduced the concept of "Tent Cinema" in which a tent was erected on a stretch of open land close to a town or village to screen the films. The first of its kind was established in Madras, called "Edison's Grand Cinemamegaphone". This was due to the fact that electric carbons were used for motion picture projectors.[7] Full-fledged film studios were built in Salem (Modern Theatres Studio) and Coimbatore (Central Studios, Neptune, and Pakshiraja). Chennai became the hub of studio activity with two more movie studios built in Chennai, Vijaya Vauhini Studios and Gemini Studios. Thus, with the undivided Madras Presidency, being the Capital to most of South India, Chennai became the center for South Indian language films. 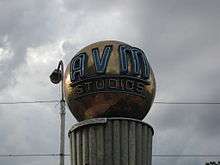 AVM studios in Chennai, the oldest surviving studio in India

The first Madras production was Keechaka Vadham (The Destruction of Keechaka), produced and directed by R. Nataraja, who established the India Film Company Limited.[8] During the 1920s, silent Tamil language film were shot at makeshift locations in and around Chennai, and for technical processing, they were sent to Pune or Calcutta. Later, some films featuring M. K. Thyagaraja Bhagavathar were shot in those cities as well. Telugu artists became active with the production of Bhisma Pratighna, a silent film, in 1921. The film was directed by Raghupathi Venkaiah Naidu and his son R. S. Prakash.[9] The two, along with Yaragudipati Varada Rao, would go on to produce and direct dozens of films throughout the decade, casting theater actors in major roles.[10] They established a long-lasting precedent of focusing exclusively on religious themes; Nandanar,[11] Gajendra Moksham, and Matsyavatar, three of their most famous productions, centered on religious figures, parables, and morals.[12]

In 1931, the first South Indian talkie, Bhakta Prahlada, was produced by H.M. Reddy.[14] Popularly known as talkies, films with sound quickly grew in number and popularity. In 1934, the industry saw its first major commercial success with Lavakusa. Directed by C. Pullaiah and starring Parupalli Subbarao and Sriranjani in lead roles, the film attracted unprecedented numbers of viewers to theaters and thrust the young film industry into mainstream culture.[15]

During the same time, the first Kannada talkie, Sati Sulochana,[16] appeared in theatres, followed by Bhakta Dhruva (aka Dhruva Kumar). Both Sati Sulochana and Bhakta Dhruva were major successes. But prospective filmmakers in Karnataka were handicapped by the lack of studios and technical crews. Sati Sulochana was shot in Kolhapur at the Chatrapathi studio; most filming, sound recording, and post-production was done in Madras. It was difficult, as well, to find financial backing for new film projects in the region; thus, very few movies in Kannada were released during the early years of Indian sound cinema. The first talkie in Malayalam was Balan, released in 1938. It was directed by S. Nottani with a screenplay and songs written by Muthukulam Raghavan Pillai. Malayalam films continued to be made mainly by Tamil producers until 1947, when the first major film studio, Udaya, was established in Alleppey, Kerala by Kunchacko, who earned fame as a film producer and director.

The Madras presidency was divided into linguistic States, known today as Andhra Pradesh, Telangana, Karnataka, Kerala and Tamil Nadu. The division marked the beginning of a new era in South Indian cinema. Cinema was celebrated regionally and exclusively in the language of the respective State. By 1936, the mass appeal of film allowed directors to move away from religious and mythological themes.[15] One such film, Jeevitha Nouka (1951), was a musical drama which spoke about the problems in a joint family. Earlier, dozens of 'social films', notably Prema Vijayam, Vandemataram and Maala Pilla, have been released in Telugu. Touching on societal problems like the status of Untouchables and the practice of giving dowry, Telugu films increasingly focused on contemporary living: 29 of the 96 films released between 1937 and 1947 had social themes.[17] Attempts made by some Congress leaders in Tamil Nadu to use stars of Tamil cinema were limited since this media remained inaccessible to the rural population, who were in the majority.[18] The politicizing of movies by the Congress virtually stopped soon after Indian Independence in 1947.[19] With the introduction of electricity to rural areas in the 1950s Dravidian politicians could implement movies as a major political organ.[18] Dravida Munnetra Kazhagam (DMK) was the first — at the time the only — party to take advantage of visual movie media.[18] Actors and writers of guerrilla theater, who were inspired by the ideologies of Periyar E. V. Ramasamy, brought the philosophies of Tamil nationalism and anti-Brahminism to celluloid media.[20] The movies not only made direct references to the independent Dravida Nadu that its leaders preached for[18] but also at many times displayed party symbols within the movie.[18] When the DMK began using cinema for political purposes and actors like MGR and S. S. Rajendran rode into politics on their popularity as actors, Tamil cinema began to be noticed by academics, S.S.Rajendran, as a film actor, became the first elected 'Member of legislative assembly in the industry from Tamil Nadu.

Meanwhile, Tamil film Chandralekha crossed all language borders. It was the time, when M. G. Ramachandran became one of the most remembered actors of India. His popularity enabled him to found a political party, the All India Anna Dravida Munnetra Kazhagam, which is regularly part of the Government of Tamil Nadu. A posthumously Bharat Ratna winning actor, he has won also the hearts of millions of Tamils, exemplified by dozens of deaths out of hysteria during his funeral. The time was hailed as "the period of giants" in Malayalam film industry, due to the work of film stars Sathyan and Prem Nazir. Nazir catapulted to the row of the finest actors of India with the film Iruttinte Athmavu (1967). Playing a demented youth — Velayadhan, Nazir discovered his prowess as a dramatic actor of great intensity. Many critics have evaluated this role as his masterpiece, and as one of the finest onscreen performances ever. He holds the record for having acted in the most leading roles – about 700 films. Another record is for the most enduring screen team along with actress Sheela. They played opposite each other in 130 movies. It was also the time when Rajkumar shot to fame. Rajkumar acted in more than 200 movies who also won National Awards for singing songs like "Naadamaya Ee Lokavella" from the movie Jeevana Chaitra. His film Bangaaradha Manushya created a record at the box office for successfully running in the main theaters for more than two continuous years. He later spearheaded the Kannada language movement, followed by millions of his fans, however the star remained away from politics. Rajkumar was kidnapped by Veerappan in the year 2000 and was released only after 108 days.