For other uses, see King (disambiguation). 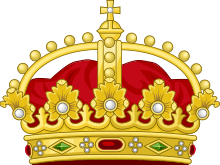 The Iron Crown of the Lombards, a surviving example of an early medieval royal crown 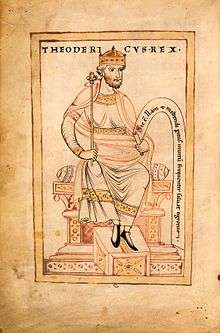 12th-century depiction of Theodoric the Great, King of the Ostrogoths. 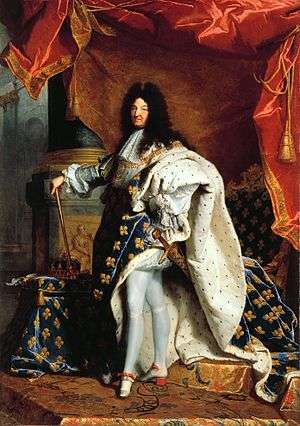 Louis XIV of France, the "Sun King" (Roi-Soleil), who ruled at the height of French absolutism (painting by Hyacinthe Rigaud 1701).

King is the title given to a male monarch in a variety of contexts. The female equivalent is queen regnant (while the title of queen on its own usually refers to the consort of a king).

The English term king is derived from the Anglo-Saxon cyning, which in turn is derived from the Common Germanic *kuningaz. The Common Germanic term was borrowed into Estonian and Finnish at an early time, surviving in these languages as kuningas. The English term "king" translates, and is considered equivalent to, Latin rēx and its equivalents in the various European languages. The Germanic term is notably different from the word for "king" in other Indo-European languages (*rēks "ruler"; Latin rēx, Sanskrit rājan and Irish ríg, but see Gothic reiks and, e.g., modern German Reich and modern Dutch rijk). It is a derivation from the term *kunjom "kin" (Old English cynn) by the -inga- suffix. The literal meaning is that of a "scion of the [noble] kin", or perhaps "son or descendant of one of noble birth" (OED).

English queen translates Latin regina; it is from Old English cwen "queen, noble woman, wife" from the PIE word for "woman" (*gwen-). The Germanic term for "wife" appears to have been specialized to "wife of a king"; in Old Norse, the cognate kvan still mostly refers to a wife generally. Scandinavian drottning, dronning is a feminine derivation from *druhtinaz "lord".

The English word is of Germanic origin, and historically refers to Germanic kingship, in the pre-Christian period a type of tribal kingship. The monarchies of Europe in the Christian Middle Ages derived their claim from Christianisation and the divine right of kings, partly influenced by the notion of sacral kingship inherited from Germanic antiquity.

The Early Middle Ages begin with a fragmentation of the former Western Roman Empire into "barbarian kingdoms". In Western Europe, the kingdom of the Franks developed into the Carolingian Empire by the 8th century, and the kingdoms of Anglo-Saxon England were unified into the kingdom of England by the 10th century.

With the breakup of the Carolingian Empire in the 9th century, the system of feudalism places kings at the head of a pyramid of relationships between liege lords and vassals, dependent on the regional rule of barons, and the intermediate positions of counts (or earls) and dukes. The core of European feudal manorialism in the High Middle Ages were the territories of the kingdom of France, the Holy Roman Empire (centered on the nominal kingdoms of Germany and Italy) and the kingdoms of England and Scotland.

In the course of the European Middle Ages, the European kingdoms underwent a general trend of centralisation of power, so that by the Late Middle Ages there were a number of large and powerful kingdoms in Europe, which would develop into the great powers of Europe in the Early Modern period.

Currently (as of 2016), fifteen kings and two queens regnant are recognized as the heads of state of sovereign states (i.e. English king or queen is used as official translation of the respective native titles held by the monarchs).