The Alabama Crimson Tide men's basketball team represents the University of Alabama in NCAA Division I men's basketball. The program has a history of being among the best of the Southeastern Conference (SEC). In the conference it trails only long-time basketball powerhouse Kentucky in basketball wins and SEC tournament titles, and is third behind Kentucky and LSU in SEC regular season conference titles. Alabama was retroactively recognized as the pre-NCAA Tournament national champion for the 1929–30 season by the Premo-Porretta Power Poll.[3] The team is currently led by first-year head coach Avery Johnson.

The men's basketball program has spent most of its history in the shadow of Alabama's football team, but has risen in stature over the past several decades. Under former coach Mark Gottfried, the team achieved a No. 1 national ranking briefly in 2003, and competed for a NCAA Regional Tournament Championship in 2004. The program was notable as a regular conference basketball contender in the 1980s and early 1990s under the direction of coach Wimp Sanderson and in the 1970s under coach C. M. Newton. Alabama has eight NCAA Tournament Sweet 16 appearances. In the 2003–04 season, the team defeated #1-seeded Stanford in the NCAA Tournament, and reached the Elite Eight round where they lost to the eventual national champion, Connecticut.

Other coaches include John Dee, Floyd Burdette, and Charles A. Bernier.[5]

In 1968, legendary Alabama football coach Paul "Bear" Bryant, who was also Alabama's athletic director, called Kentucky men's basketball coach Adolph Rupp looking for someone to turn around Alabama's basketball program. Rupp recommended C. M. Newton, a former backup player at Kentucky who had been at Transylvania University for 12 years.[6] In twelve seasons at Alabama, Newton led the Tide to a record of 211–123. The Crimson Tide won three straight SEC titles under Newton (1974, 1975, and 1976), the only program besides Kentucky to accomplish this feat.[6] Newton also guided Alabama to four NIT and two NCAA Men's Division I Championship tournament berths, prompting the school to name a recruiting suite in his honor in 2006.[7]

Just as he did at Transylvania, Newton recruited Alabama's first black player, Wendell Hudson, in 1969, integrating his second team in as many coaching stops.[8]

Newton resigned as head coach after the 1980–81 season to become assistant commissioner of the SEC. He was succeeded by his top assistant, Wimp Sanderson. He had been at Alabama since 1960 as a graduate assistant to Newton's predecessor, Hayden Riley; he was named a full-fledged assistant in 1961. In 12 years as head coach his teams averaged 21.8 wins a year, with a 267–119 record, and they won 4 SEC tournaments. They played in one NIT and eight NCAA tournaments making the "Sweet 16" five times. Sanderson is the only coach in Alabama history to win 200 or more games in his first 10 years. He was the SEC Coach of the Year in 1987, 1989 and 1990, and was the National Coach of the Year in 1987.[9]

Sanderson was best known for wearing garish plaid sports jackets on the sidelines. At one point, Coleman Coliseum was known as the "Plaid Palace", and the mid-court logo was painted in a crimson-and-white plaid pattern.

Hobbs was hired at Alabama as an assistant coach for Wimp Sanderson in 1985 and spent seven years as an assistant in Tuscaloosa helping the Crimson Tide win one SEC Championship and four SEC Tournament crowns while the Tide made four appearances in the NCAA Tournament's Sweet 16. As an assistant, he had the opportunity to coach such All-SEC performers as Robert Horry, James "Hollywood" Robinson and Latrell Sprewell.

When Sanderson left Alabama following the 1992 season, Hobbs was named head coach. In his first season, the Tide finished 16–13 and advanced to the NIT. In 1994 and 1995, Alabama recorded 20-win seasons and advanced to the NCAA Tournament behind the play of future NBA All-Star Antonio McDyess. In 1996, Hobbs led UA to a 19–13 mark and a berth in the NIT Final Four. He resigned his post following the 1998 season after compiling a 110–76 (.594) career record and producing nine All-SEC players.

Mark Gottfried served as the Crimson Tide's head coach from the 1998–99 season until midway through the 2008–09 season.[4] Gottfried played 3 seasons of basketball at Alabama under Wimp Sanderson, and the Crimson Tide advanced to the Sweet Sixteen in each of those seasons. He was hired by Alabama in March 1998 after coaching at Murray State for three seasons.

The Crimson Tide achieved the highest pinnacle ever for the school in both the NCAA Championship Tournament and the Associated Press Poll reaching the Elite Eight in the tournament in 2004 and reaching the No. 1 spot in the nation in the AP poll in 2002, both under Mark Gottfried's command.

Gottfried led the Tide to its only SEC Championship under his watch during the 2001–02 season, although the team never won a conference tournament championship during his tenure. For his efforts in 2002, Gottfried was named SEC Coach of the Year by both the Associated Press and his fellow Southeastern Conference coaches. Perhaps his biggest accomplishment as coach at Alabama was leading the Crimson Tide to five consecutive NCAA tournaments from 2002–2006, another first for the school that occurred under his watch.

On March 27, 2009 Anthony Grant agreed in principle to become the twentieth Crimson Tide head men's basketball coach.[11] Grant came to Alabama after serving as the head coach at VCU from 2006 to 2009.

After a mediocre first season, Grant led the veteran 2010–11 team to a SEC West title and a 2nd-place finish in the 2011 NIT. The 2011–12 team endured the suspensions of several star players to finish with a 21–12 record and a berth in the 2012 NCAA Men's Division I Basketball Tournament, where they lost in the 2nd round to Creighton. This was the Crimson Tide's first trip to the NCAA Tournament since 2006. In March 2015, Grant was let go by Alabama after six seasons. Assistant coach John Brannen served as interim head coach for the 2015 NIT tournament.[12]

On April 5, 2015, Avery Johnson agreed to become Alabama's next head coach.[13] The former NBA coach said he was attracted to the position because he perceived it as "a big challenge" in that Alabama is not a "perennial favorite" and has never won a championship before.[14] 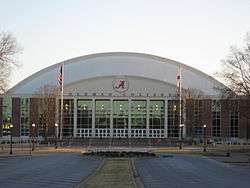 The Crimson Tide basketball team practices and plays in Coleman Coliseum, a multi-purpose arena on the UA campus in Tuscaloosa. The arena was built for $4.2 million and opened in 1968 as a replacement for the aging Foster Auditorium. In 2005, the building underwent a renovation in which more seats were added. The arena officially seats 15,314 people.

Coleman Coliseum was named for Jefferson Jackson Coleman, a prominent alumnus and longtime supporter of the University of Alabama. Until his death in 1995, he was the only person that had attended every Alabama football bowl game, starting with the Rose Bowl Game on January 1, 1926. Prior to 1990, the building was known as Memorial Coliseum.

"Mark's Madness" was a student organization named after former Crimson Tide coach Mark Gottfried, which is also a play on the nickname for the NCAA Basketball Tournament, "March Madness".[16] It was created by a group of Alabama students in January 2000 in an attempt to create a more exciting atmosphere in Coleman Coliseum.[17] Alabama's home record spoke for itself. During the Gottfried era, the Crimson Tide was an astounding 137-27 (.835) in Coleman Coliseum.[16] Mark's Madness was the largest student organization on campus during its time.[16] The end of Mark Gottfried's tenure also meant the end of Mark's Madness.

After Coach Anthony Grant was hired, a group of senior students approached the UA Marketing Department in the summer 2009 about resurrecting the student section. During the first exhibition game of the 2009 season, it was announced that the new name of the student organization for supporting Alabama basketball would be "Crimson Chaos".

As Crimson Chaos entered its second year, it officially registered as a University of Alabama student group and adopted a new format. In addition to supporting men's basketball, Crimson Chaos expanded to support all University of Alabama sports, becoming the official student group of athletics at the University.[18] The group also tried new things to make the atmosphere in Coleman Coliseum as intimidating as it was in previous years, including adding the "Roll Tide Roller Coaster".[19] The newly energized environment Crimson Chaos created in Coleman Coliseum helped the Tide complete an undefeated season at home (for the 2010–11 season) with a 19–0 record, including wins over then #12 Kentucky, Georgia, Mississippi State.

Alabama has appeared in 14 National Invitation Tournaments, reaching the championship game on two occasions. Alabama has an overall NIT record of 24–17.

Alabama has seen its stars go on to win nine NBA Championships and earn six All-Star selections, six All-Defensive Team honors, three All-Rookie honors and more than $390 million in the NBA. Former Alabama players have gone on to suit up in nearly 10,000 NBA games and have scored more than 90,000 cumulative points.

Tide Alumni Currently in the NBA