This article is about the mosque in Konya, Turkey. For other mosques with the same name, see Alaeddin Mosque (disambiguation).

The Alâeddin Mosque is the principal monument on the citadel of Konya, Turkey. The building served as the "Mosque of the Throne" for the Seljuq Sultans of Rum and contains the dynastic mausoleum. It was constructed in stages between the mid-12th and mid-13th centuries. Both the citadel and the mosque bear the name of sultan 'Ala al-Din Kayqubad I (Alâeddin Tepesi and Alâeddin Camii).

Following typical Seljuq procedure, a Christian basilica on the site was converted into a mosque following the capture of the city in 1080. Much of the building material and architectural ornament incorporated in later rebuilding, especially columns and capitals, was salvaged from this basilica and other nearby Byzantine structures.

Evidence of an early building program dates from the time of Mesud I.[1] An inscription dates the fine, ebony minbar to 1155; the minbar is the first dated example of Seljuq art in Anatolia.[2] The polychrome ceramic frame of the mihrab and the dome above may date to this period.

Kaykaus I began a major rebuilding program in 1219. He changed the main entrance from the west to the north, opposite the mihrab. He added a monumental façade on the north side, overlooking the city and facing the Seljuq palace. A marble tomb was begun in the courtyard. Kaykaus’ building was cut short by his death in the same year, only to be resumed thereafter by his brother and successor Kayqubad I. Kayqubad had several of his brother's inscriptions altered and claimed the improvements to the mosque for himself. In 1235 he added a large room, supported by forty-two columns, to the east of the mihrab.

The minaret, the marble mihrab (1891), and the eastern door, through which most visitors enter the mosque, date from the Ottoman period. The eastern wing of the mosque, constructed with re-used Byzantine and Hellenistic columns, has a unique openness and spaciousness.[3]

Sultans buried in the Mosque 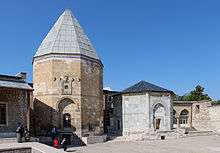 The courtyard of Alâeddin Mosque encloses two monumental mausolea or türbe. According to an inscription on the façade, Kilij Arslan II built the decahedral tomb with the conical roof.[4] This mausoleum became the burial place of the Seljuq dynasty and houses the sarcophagi of eight of the Seljuq sultans of Rum:

The second mausoleum was begun by Kaykaus I but left unfinished at the time of the sultan’s death (d. 1219). The tomb is octagonal and constructed from marble. This unfinished mausoleum is known as Adsız Türbe, or the "Anonymous Mausoleum," since the names of those buried within are unknown. Mummified corpses are on view.