He graduated from the United States Naval Academy in 1909 and served in the United States Navy during World War I and World War II. During his wartime naval service, Alan Kirk became the U.S. naval attaché in London (1939 to 1941). He was Director of the Office of Naval Intelligence from March 1941 but, obstructed and opposed by Rear Admiral Richmond Turner, he was unable to develop the office into an effective centre along the lines of the British Royal Naval Operational Intelligence Centre (which he had seen whilst in London). Eventually, he requested a transfer to an Atlantic destroyer squadron.[1] 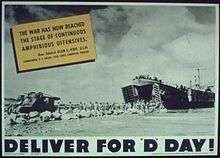 Kirk served as an amphibious commander in the Mediterranean in 1942 and 1943 (the Allied invasion of Sicily and Italy). In addition, he was the senior U.S. naval commander during the Normandy landings of June 6, 1944 embarked on the heavy cruiser USS Augusta (CA-31), and as Commander U.S. Naval Forces, France during 1944 and 1945. He retired from the Navy as a full admiral in 1946.

Admiral Kirk took his post as the second president of Amcomlib, in February 1952. As a former U.S. ambassador to the Soviet Union, he oversaw the recruitment of emigres in New York City and Munich, a group that would later form the core of Radio Liberty's staff. Less than a year after taking office, Kirk was forced to resign due to poor health. Also in 1952, he served briefly as Director of the Psychological Strategy Board, which planned for and coordinated government psychological operations.[2]