Thomas Green Clemson, (July 1, 1807 – April 6, 1888) was an American politician and statesman, serving as an ambassador and the United States Superintendent of Agriculture. He served in the Confederate States Army. He founded Clemson University, located in South Carolina.

Born in Philadelphia, Clemson was the son of Thomas Green Clemson, III and Elizabeth Baker. He is descended from Quaker roots and his mother was Episcopalian. Partly because of this mixed religious background, Clemson's personal religious belief is not well documented.[1] In 1813, his father died, and his father’s second cousin John Gest was appointed guardian over him and his five siblings. Clemson was one beneficiary of his father’s $100,000 life savings, which was split up between him and his five siblings.[1] There is not much known about his home life, but his schooling started in the winter of 1814, as he, as well as the older Clemsons, attended day school at Tabernacle Presbyterian Church. There is no knowledge as to exactly how long Thomas attended day school, but his next schooling venture began in 1823. From 1823-1825, Clemson was educated at Alden Partridge's Military Academy in Vermont, also known as Norwich University.[1] It is known that Clemson’s older brother, who had recently graduated from Princeton, had sent Thomas a letter outlining the courses and subjects that he should study. He completed those studies sometime in late 1825, but the exact month is not certain. What is known, however, is that he went back to Philadelphia in 1825 and he started studying Mineralogy. Later on, sometime in 1826, Clemson left for Paris, France. His departure date, the ship name, and where exactly he landed in France is unknown, as well as when he returned to Philadelphia.[1]

Not much is documented from the beginning of his trip to Paris that started in 1826. A letter that he wrote to his Mother did not include anything about his scientific study but did vaguely reference that he had a particular interest in expanding his knowledge. In addition, the letter states that if he were to die he wants all of his wealth to be left to his mother and then after she passes it be left to any sister who is not married. Later on in 1829, Clemson wrote a letter to Benjamin Silliman, M.D., about his research of Iron Ore. In 1826–27, he expanded his knowledge of practical laboratory chemistry while working with chemist Gaultier de Clowbry. He soon furthered his chemistry study by working with other Parisian chemists.[1] Following his time there he further trained at Sorbonne and the Royal School of Mines. He received his diploma as an assayer from the Royal Mint.[2]

Upon his return to the U.S., he co-authored significant legislation to promote agricultural education. With knowledge of both French and German, he served as U.S. charge d'affaires to Belgium from 1844 to 1851. Because of his education, historians have called Clemson "a quintessential nineteenth-century Renaissance man.”[1]

In 1843, Thomas purchased a 1000-acre plot of land in the Edgefield district in South Carolina. Named “Canebrake” due to the vast amount of dense and thick canes along the riverbank, the land, as well as the twenty slaves he placed there, had an estimated cost of $24,000. Though this plot of land did not do well while Clemson was abroad in Belgium, he was furthering his studies in the field of Agriculture. He translated the lengthy article “Extraction of Sugar from the Beet”, written by Professor Melsens, a professor at one of Belgium’s State colleges, from French to English. Upon his return from Belgium, in 1853 Clemson purchased a small 100 acre piece of land in Maryland which he called “The Home”. The advantages for Clemson to live in Maryland, not too far from Washington, was the ability to get better access to utilities and resources for his research, studies, and experiments. While there, his studies in Agricultural Chemistry led to findings that were published in scientific journals, such as The American Farmer. In addition, he attended the meetings of both the Maryland and the United States Agricultural Societies. Within that framework, he did a study of cattle disease. The study showed that cattle coming from the North to the South contracted the disease, whereas cattle going from the South to the North transmitted the disease. This added to the knowledge of Texas Fever, which was the disease observed by Clemson. His findings and distinction as a scientist got him an invitation to speak at the Smithsonian Institution in Washington in 1858. Clemson was active in the field of agricultural development for many years to come, as more of his documents became published.[3]

On November 13, 1838, at the age of 31, Clemson married Anna Maria Calhoun, daughter of John C. Calhoun and Floride Calhoun. John C. Calhoun was the noted Senator from South Carolina and 7th Vice President of the United States. After Calhoun's death, Floride Calhoun, Anna Calhoun Clemson, and two other Calhoun children inherited the Fort Hill plantation near Pendleton, South Carolina. It was sold with 50 slaves for $49,000 to Calhoun's oldest son, Andrew Pickens Calhoun, in 1854. After the war and upon the Andrew's death in 1865, Floride Calhoun foreclosed on his heirs prior to her death in 1866. After lengthy legal procedures, Fort Hill was auctioned in 1872. The executor of her estate won the auction, which was divided among her surviving heirs. Her daughter, Anna Clemson, received the residence with about 814 acres (329.6 ha) and her great granddaughter, Floride Isabella Lee, received about 288 acres (116.6 ha). Thomas Green and Anna Clemson moved into Fort Hill in 1872. After Anna's death in 1875, Thomas Green Clemson inherited Fort Hill and lived there until his death. He died on April 6, 1888 and is buried in St. Paul's Episcopal churchyard in Pendleton, South Carolina.

Thomas Green Clemson and his wife Anna Calhoun Clemson had four children. Their first child, whose name is not known, died as an infant in 1839. In 1841, John Calhoun Clemson was born. Shortly after in 1842, Anne Clemson gave birth to her daughter Floride Elizabeth Clemson. At age 15, John was getting treatment for a spinal condition in Northampton, Massachusetts. Around this time, the Clemson’s were having health problems with another child. Cornelia “Nina” Clemson was born in October 1855, but just a few years into her life in 1858, she died from Scarlet Fever. On July 23, 1871, their daughter Floride died. Shortly after, in less than three weeks, tragedy struck the family again as Clemson’s only son John died on August 10, 1871.[1]

From 1860 to 1861, Clemson served in the Buchanan administration as Superintendent of Agriculture. As the threat of civil war became a reality, Clemson resigned this post on March 4, 1861. He stood on the side of his adopted state. Following the firing on Fort Sumter on April 12, 1861, Clemson left Maryland for South Carolina. In Pendleton on November 2, 1861, Clemson spoke to the Farmers Society and publicly "Urged the establishment of a department of agriculture in the government of the Confederate States which, in addition to fostering the general interest of agriculture, would also serve as a sort of university for the diffusion of scientific knowledge and the improvement of agriculture."

Clemson, through representation of the United States government, served as the Chargé d’affaires to Belgium starting October 4, 1844 and ending January 8, 1852. He received the position largely due to his father in-law John C. Calhoun. Calhoun, currently, was the Secretary of State under the Taylor Administration. President Taylor had given the task of filling the position to Calhoun, who quickly nominated his son in-law Clemson. Clemson was more than qualified to serve this position for the government. From his time spent in Paris studying, he picked up on European culture and their way of living. In addition, the time there also gave him a feel for continental problems and thinking. It goes on from there, with his extensive knowledge of not just Belgium’s but the vast majority of Europe’s economics, politics, and social life, he was better able to connect the United States to Belgium, as well as the other European countries. In his time in Belgium, only one treaty was passed by the two countries. The treaty was the Treaty of Commerce and Navigation. The treaty, which was set to last ten years, removed trade and tariff restrictions between the two countries. This led to an increase in commerce between the United States and Belgium.[4] Clemson was awarded the Order of Leopold by King Leopold I during his time as chargé.[5]

Fifty-four-year-old Clemson, enlisted in the Confederacy and was assigned to the Army of the Trans-Mississippi Department. Clemson worked in Arkansas and Texas developing nitrate mines for explosives. He was paroled on June 9, 1865 at Shreveport, Louisiana, after four years of service. His son, Captain John Calhoun Clemson, enlisted in the Confederate States Army and spent two years in a Union prison camp on Johnson's Island, in Lake Erie, Ohio. 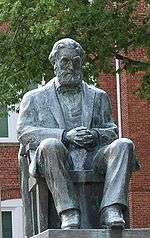 Outliving his wife and his children, Clemson drafted a final will in the mid-1880s. The will called for the establishment of a land-grant institution called "The Clemson Agricultural College of South Carolina" upon the property of the Fort Hill estate. He believed that education, especially scientific education, leads to economic prosperity. He wanted to start an agricultural college because he felt that government officials did not appreciate the importance of agricultural education.[1]

Although the college was de facto an all-white, all-male college when it opened, Clemson did not explicitly ban women or African-Americans from attending, unlike the founders of Vanderbilt, Tulane, Rice and other southern universities.[6]

The military college, founded in 1889, opened its doors in 1893 to 446 cadets. Clemson Agricultural College was renamed Clemson University in 1964. A statue of Thomas Green Clemson, as well as the Fort Hill house, are located on the campus. The town of Calhoun that bordered the campus was renamed Clemson in 1943.

In 2009, a biography of Clemson was published by the university press edited by Alma Bennett.[7][8]