Sawyer was born in Cincinnati, Ohio on February 10, 1887, to Caroline (née Butler) and Edward Milton Sawyer. He served as a member of Cincinnati City Council from 1912 until 1916. Prior to his political career, he worked at the Cincinnati law firm of Dinsmore & Shohl.[1] Between World War I and World War II, he was a prominent Ohio Democratic politician. In the 1930s, a faction led by Sawyer vied with a faction led by Martin L. Davey for control of the state Democratic party.[2] He was the 44th Lieutenant Governor of Ohio from 1933–1935. In 1938, Sawyer was an unsuccessful candidate for governor.

Sawyer authored the repeal of the Eighteenth Amendment. [3]

He was also appointed as United States Ambassador to Belgium by Franklin D. Roosevelt and was Minister to Luxembourg during the difficult period from 1944 to 1946, at the beginning of the Belgian royal question concerning King Leopold III of Belgium.[4] 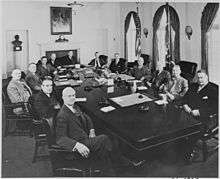 While Secretary of Commerce, Sawyer was ordered by Truman to seize and operate the steel mills in 1952. This seizure was executed to prevent a labor strike which Truman believed would hamper the ability of the United States to proceed in the war in Korea.

When Sawyer returned to Cincinnati after serving President Truman, he joined the law firm of Taft, Stettinius, and Hollister, which had been founded by another prominent Cincinnati politician, Robert A. Taft, and became its managing partner.

In 1968, he authored Concerns of a Conservative Democrat (Southern Illinois University Press). Charles Sawyer served on the following commissions, Hoover Commission on Overseas Task Force, the Commission on Money and Credit, and the World's Fair Site Committee.

He died in April 1979, at age 92, in Palm Beach, Florida. He was buried at Spring Grove Cemetery near his birthplace in Cincinnati, Ohio.

Sawyer married his second wife, the former Elizabeth De Weyrac on June 10, 1942; they had no children.