Albert Kahn (March 21, 1869 – December 8, 1942) was the foremost American industrial architect of his day. He is sometimes called the architect of Detroit. In 1943, the Franklin Institute awarded him the Frank P. Brown Medal posthumously.[1]

Kahn was born to a Jewish family[2] on March 21, 1869 in Rhaunen, Kingdom of Prussia. Kahn came to Detroit in 1880, at the age of 11.[3] His father Joseph was trained as a rabbi; his mother Rosalie had a talent for the visual arts and music. As a teenager, he got a job at the architectural firm of Mason and Rice.[3] Kahn won a year's scholarship to study abroad in Europe, where he toured with another young architecture student, Henry Bacon, who would later design the Lincoln Memorial in Washington, D.C..[3][4]

In 1895, he founded the architectural firm Albert Kahn Associates.[5] Together with his younger brother Julius, he developed a new style of construction where reinforced concrete replaced wood in factory walls, roofs, and supports. This gave better fire protection and allowed large volumes of unobstructed interior. Packard Motor Car Company's factory, designed in 1903, was the first development of this principle.[6] 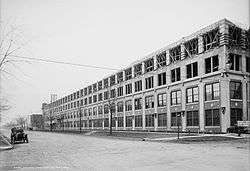 Kahn later designed, in 1917, the massive half-mile-long Ford River Rouge Complex in Dearborn, Michigan. The Rouge grew into the largest manufacturing complex in the U.S., with a force that peaked at 120,000 workers.

Kahn was responsible for many of the buildings and houses built under direction of the Hiram Walker family in Walkerville, Ontario, including Willistead Manor. Kahn's interest in historically styled buildings is also seen in his houses in Detroit's Indian Village, the Cranbrook House, the Edsel and Eleanor Ford House and The Dearborn Inn, the world's first airport hotel.

Kahn also designed the landmark 28-story Art Deco Fisher Building in Detroit, considered one of the most beautiful elements of the Detroit skyline. In 1928, the Fisher building was honored by the Architectural League of New York as the year's most beautiful commercial structure. Between 1917 and 1929, he designed the headquarters for all three major daily newspapers in Detroit.

On May 8, 1929, through an agreement signed with Kahn by President of Amtorg Saul G. Bron, the Soviet government contracted the Albert Kahn firm to design the Stalingrad Tractor Plant, the first tractor plant in the USSR. On January 9, 1930, a second contract with Kahn was signed for his firm to become consulting architects for all industrial construction in the Soviet Union. Under these contracts, during 1929–1932, Kahn’s firm, at its headquarters in Detroit and the especially created design bureau in Moscow, Gosproektstroi, headed by Albert Kahn’s younger brother, Moritz Kahn, trained over 4,000 Soviet architects and engineers and designed 521 plants and factories[3] under the First Five-Year Plan.[9][10]

A frequent collaborator with Kahn was architectural sculptor Corrado Parducci. In all, Parducci worked on about 50 Kahn commissions including banks, office buildings, newspaper buildings, mausoleums, hospitals and private residences.

Kahn's firm designed a large number of the army airfield and naval bases for the United States government during World War I. By World War II, Kahn's 600-person office was involved in making Detroit an important element of America's Arsenal of Democracy. Among others, the office designed the Detroit Arsenal Tank Plant, and the Willow Run Bomber Plant, Kahn's last building, located in Ypsilanti, Michigan, where Ford Motor Company mass-produced Consolidated B-24 Liberator bombers.[11][12]

Albert Kahn worked on more than 1,000 commissions from Henry Ford[3] and hundreds for other automakers. Kahn designed showrooms for Ford Motor Company in several cities including New York, Washington, D.C., and Boston. He died in Detroit on December 8, 1942.

As of 2006, Kahn had approximately 60 buildings listed on the National Register of Historic Places. Not all of Kahn's works have been preserved. Cass Technical High School in Detroit, designed by Malcomson and Higginbotham and built by Albert Kahn's firm in 1922, was demolished in 2011 after vandals had stripped it of most of its fixtures.[14] The Donovan Building, later occupied by Motown Records, abandoned for decades, was demolished as part of Detroit's beautification plan before the 2006 Super Bowl XL.

He is not related to American architect Louis Kahn. 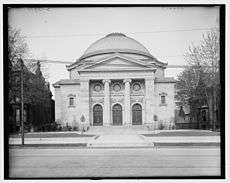 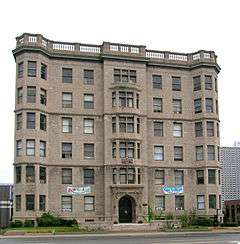 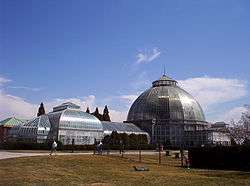 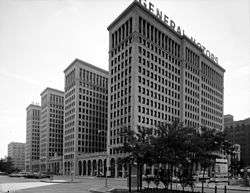 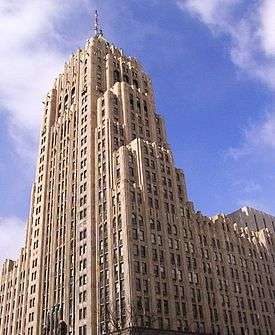 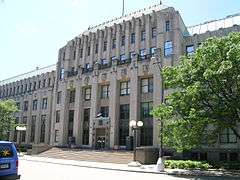 All buildings are located in Detroit, unless otherwise indicated.

BUILDINGS AT THE UNIVERSITY OF MICHIGAN

Hill Auditorium, with Burton Memorial Tower in the background

University of Michigan Central Campus: Angell Hall, one of the major buildings of the College of Literature, Science, and the Arts