Michael Graves (July 9, 1934 – March 12, 2015) was an American architect. Identified as one of The New York Five, as well as Memphis Group, Graves was known first for his contemporary building designs and some prominent public commissions that became iconic examples of Postmodern architecture, such as the Portland Building and Denver Public Library. His recognition grew through designing domestic products sold by premium Italian housewares maker Alessi, and later low-cost new designs at stores such as Target and J. C. Penney in the United States.[1] He was a representative of New Urbanism and New Classical Architecture and formerly designed postmodern buildings, and was recognized as a major influence in all three movements.[3]

Graves was born in Indianapolis, Indiana.[1] He attended Broad Ripple High School, receiving his diploma in 1952. He earned a bachelor's degree from the University of Cincinnati where he also became a member of the Sigma Chi fraternity. He earned a master's degree in architecture from Harvard University in 1959.[4] Graves won the Rome Prize in 1960 and spent the next two years at the American Academy in Rome.[5] 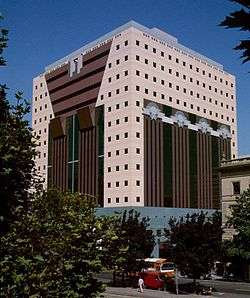 The Portland Building in Oregon, 1982

From 1964 until the end of his life, Graves was an architect in public practice in Princeton, New Jersey.[1] He directed the firm Michael Graves & Associates, which has offices in Princeton and in New York City.

Early in his career, Graves was, along with Peter Eisenman, Charles Gwathmey, John Hejduk and Richard Meier, considered as one of the "New York Five",[8] a group of New York City architects who espoused a pure form of modernism. In contrast to his later career, Graves spent much of the 1970s designing modernist residences, such as the Snyderman House in Fort Wayne, Indiana.

For most of his career, however, Graves shifted away from modernism toward postmodernism and new urbanism. One of his most famous works, the Portland Building, which opened in 1982 in Portland, Oregon, is regarded as the first major built example of postmodern architecture.[3] The celebrated but controversial building, composed of municipal offices, is subject to an ongoing preservation debate.[3] It was added to the National Register of Historic Places in 2011.[9]

Graves subsequently received a number of major commissions. Some of his most notable completed buildings include the Humana Building[1] (a skyscraper in Louisville, Kentucky),[1] the Denver Public Library, and the renovation of the Detroit Institute of Arts. He built many buildings for the Walt Disney Company, including the company headquarters in Burbank, California,[3] Disney's Hotel New York at Disneyland Paris, and the Swan and Dolphin resorts at Walt Disney World. In the 1980s, he also designed an expansion for the Whitney Museum of American Art in New York City, but the highly contested design went unbuilt due to local opposition.[1]

Though Graves' prominence as an architect may have reached its highest point during the 1980s and into the early 1990s, he continued to practice as an architect throughout his life, completing various works such as the O'Reilly Theater, the NCAA Hall of Champions, 425 Fifth Avenue, and the Louwman Museum.

Graves also received recognition for his multi-year renovation of his personal residence in Princeton, nicknamed "The Warehouse".[10] 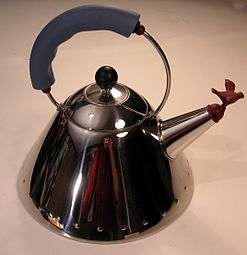 In 1985, Graves designed a stainless steel teakettle featuring a red whistle shaped like a bird[3] for the Italian company Alessi, which became the company's all-time bestselling product.[11] 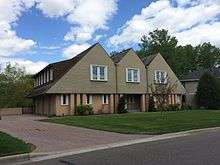 Cedar Gables House (1998) was commissioned by Target Corp as a model home to showcase his new line of housewares.

Graves designed the scaffolding used for the restoration of the Washington Monument in Washington DC.[1] During that assignment, which Target Corp sponsored, he met a Target executive who appreciated his product design and a relationship was formed.[3] He began designing consumer products for the mass market and Target sold his products through their stores.[12] In 1998, Target commissioned Graves to design a model home to showcase the new line of housewares; Graves went a step further did a complete design of the contemporary house with custom furniture, lighting, fixtures, and other unique items, making it only one of three homes he designed and furnished. By 2009, however, he noted the house "doesn't have a wow factor. That gets old quickly."[13] The partnership went from less than a dozen objects in 1997 to more than 2,000 when the partnership with Target ended in 2012.[14] By 2013, concerned about Target's partnerships with other designers with less-successful outcomes, he explored other relationships to bring products to consumers. When the former Target executive became CEO of J.C. Penney, his products switched over to being sold exclusively through J.C. Penney.[14]

After Graves became paralyzed, his use of a wheelchair turned him into a "reluctant health expert",[3] with an increased awareness of accessible design. He focused his attention on the design of wheelchairs, hospital furnishings, hospitals, and disabled veteran's housing.[3]

In 1962, Graves became the Robert Schirmer Professor of Architecture, Emeritus at Princeton University. He held the position for thirty-nine years, while simultaneously practicing architecture, before finally retiring from the post in 2001.[1][5]

In 2014, the Michael Graves School of Architecture was established at Kean University in Union, New Jersey.[1]

On November 22, 2014, the Architectural League of New York held a symposium in his honor, in which several prominent architects such as Steven Holl and Peter Eisenman as well as Graves himself served as guests and lecturers.[21] From October 13, 2014 until April 5, 2015, the Grounds for Sculpture in Hamilton, New Jersey held a retrospective exhibition of his work, entitled Michael Graves: Past as Prologue.[22] 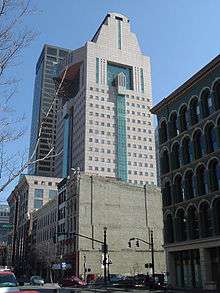 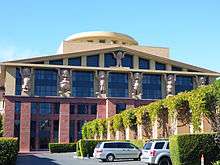 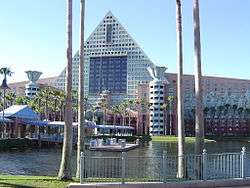 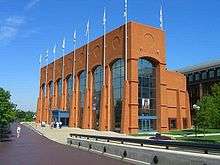 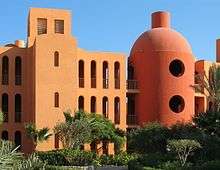 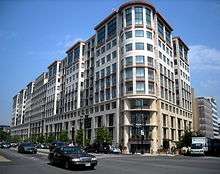 Museum of the Shenandoah Valley in Winchester, Virginia, 2005 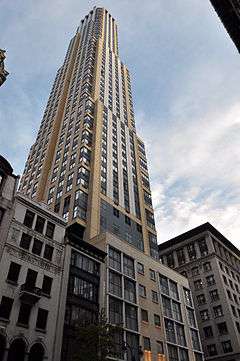