Alia Bhatt (born 15 March 1993[1]) is a British[3] film actress and singer who works in Bollywood. Born into the Bhatt family, she is the daughter of filmmaker Mahesh Bhatt and actress Soni Razdan, and the cousin of actor Emraan Hashmi. She is regarded as one of the most popular celebrities in India.

After making her acting debut as a child artist in the 1999 thriller Sangharsh, Bhatt played her first leading role in Karan Johar's moderately successful drama Student of the Year (2012), which earned her a nomination for the Filmfare Award for Best Female Debut. She received critical acclaim for portraying emotionally intense characters in the road drama Highway (2014), which won her a Filmfare Critics Award for Best Actress, and the crime drama Udta Punjab (2016). Bhatt established herself in Bollywood by starring as the female lead in the romantic drama 2 States (2014), the romantic comedy Humpty Sharma Ki Dulhania (2014), and the drama Kapoor & Sons (2016), all of which earned over ₹1 billion (US$15 million) worldwide.

Bhatt was born on 15 March 1993,[4][5] to Indian film director Mahesh Bhatt and actress Soni Razdan. Her father is of Gujarati descent[6][7] and her mother is of Kashmiri and German ancestry.[8][9][10] Director Nanabhai Bhatt is her paternal grandfather. She has an elder sister, Shaheen (born 1988)[11] and two half-siblings, Pooja Bhatt and Rahul Bhatt. Actor Emraan Hashmi and director Mohit Suri are her maternal cousins, while producer Mukesh Bhatt is her uncle.[12] Bhatt was educated at the Jamnabai Narsee School in Mumbai.[13]

Bhatt's first acting role was as a child artist in Sangharsh (1999), starring Akshay Kumar and Preity Zinta where she played the younger version of Zinta's character.[14] She had her first leading role in 2012 with Karan Johar's Student of the Year, alongside Sidharth Malhotra and Varun Dhawan.[15] She portrayed the role of Shanaya Singhania, a sophisticated teenage girl who is in a relationship with Dhawan's character but is attracted to the character played by Malhotra. Taran Adarsh of Bollywood Hungama wrote of her performance, "Alia's role is reminiscent of Kareena Kapoor in Kabhi Khushi Kabhie Gham. Stylish, classy, born with a silver spoon, she's someone who loves to flaunt not just her clothes and bags, but also her riches. Extremely photogenic, Alia makes a super-confident debut."[16] Anupama Chopra of Hindustan Times also mentioned the similarities with Kapoor's character, but noted that her performance was "without the killer attitude."[17] Student of the Year grossed ₹960 million (US$14 million) at the box office.[18] 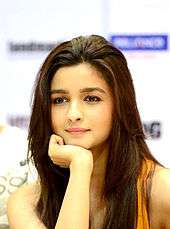 Bhatt at an event for Highway in 2014. She won the Filmfare Critics Award for Best Actress for the film

Bhatt established herself in Bollywood with her three film releases of 2014.[19][20] She played the protagonist of Imtiaz Ali's road film Highway opposite Randeep Hooda. Her portrayal of a lonely teenage girl who develops stockholm syndrome after being abducted was acclaimed by the critics.[21] Rachit Gupta of Filmfare mentioned that "[a]t 20, it’s surprising how Alia has got so many deft nuances right. It’s as if the actor has grown with the character. She is truly one of the most promising new actors in Hindi films."[22] Sonia Chopra of Sify added that Bhatt is "[c]ompletely immersed" in her role, and that "Alia’s uninhibited and raw performance will have you emotionally invested in her character all through."[23] Though the film underperformed at the box office,[24] Bhatt won the Filmfare Critics Award for Best Actress and also garnered a Best Actress nomination at the ceremony.[25][26]

In Karan Johar and Sajid Nadiadwala's joint production 2 States, Bhatt starred opposite Arjun Kapoor. An adaptation of Chetan Bhagat's novel of the same name, it narrates the story of two IIM Ahmedabad students who encounter trouble in convincing their parents to approve of their relationship. For her role as Ananya Swaminatham, a headstrong Tamil girl, she learnt the language.[27] Critics were appreciative of her performance with Rediff.com publishing that Bhatt "really grows into the character and makes you believe that she's a career-oriented IIM-A grad."[28] Shubhra Gupta of The Indian Express added that Bhatt was a "surprise" and was "easy and fresh and natural."[29] The film emerged as a top-grossing production, earning over ₹1.7 billion (US$25 million) worldwide.[18]

Bhatt's final film role in 2014 was as Kavya Pratap Singh, a Punjabi girl who engages in a romantic affair with a stranger a few days prior to her wedding, in the romantic comedy Humpty Sharma Ki Dulhania. Co-starring Varun Dhawan and Siddharth Shukla, the film was described as a tribute to Dilwale Dulhania Le Jayenge (1995) by Johar, who served as producer.[30] Writing for India Today, Rohit Khilnani thought that Bhatt had pitched in "one of her best performances so far", though Nandini Ramnath of Mint found her performance to be lacking in subtlety, writing that she was "more comfortable acting out her feelings through dialogue and actions".[31][32] Humpty Sharma Ki Dulhania proved to be her second consecutive release to earn over ₹1 billion (US$15 million).[18] Her accomplishments in 2014 led Box Office India to label her as the top Bollywood actress of the year.[33]

Also in 2014, Bhatt appeared in a short film on women's safety, entitled Going Home, from director Vikas Bahl.[34] She next reunited with Bahl to film the romantic comedy Shaandaar. Released in 2015, the film featured Shahid Kapoor and Bhatt as two insomniacs who fall in love during a destination wedding.[35] Kunal Guha of Mumbai Mirror criticised the film and wrote that Bhatt "socks life into her character but fails to pump any into this film".[36] Shaandaar earned little at the box office.[37] 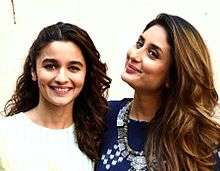 In 2016, Bhatt played the supporting role of a lively young girl with a buried past in Kapoor & Sons, a drama about a dysfunctional family starring Sidharth Malhotra and Fawad Khan. The film proved to be a critical and commercial success.[38][39] Bhatt then took on the part of a poverty-stricken Bihari migrant in the Indian state of Punjab in Udta Punjab (2016), a crime drama about substance abuse from the director Abhishek Chaubey. The intense role marked a significant departure from the mostly light-hearted parts she had previously played, and in preparation, she watched documentaries on drug abuse and learned to speak a Bihari dialect.[40] The film, co-starring Shahid Kapoor, Kareena Kapoor, and Diljit Dosanjh, generated controversy when the Central Board of Film Certification deemed that the film represented Punjab in a negative light and demanded extensive censorship before its theatrical release.[41] The Bombay High Court later cleared the film for exhibition with one scene cut.[42] Bhatt's performance in the film was critically acclaimed, with several commentators believing that it was her best performance to that point.[43] Raja Sen of Rediff.com wrote that Bhatt "commits to her accent and deals with the film's most unsavoury section, and is stunning during an incendiary speech that elevates the entire film to a whole other level."[44]

As of June 2016, Bhatt has three upcoming projects. She has completed filming for Gauri Shinde's drama Dear Zindagi, in which she plays the lead role alongside Shah Rukh Khan.[45][46] She is filming opposite Varun Dhawan for the romantic comedy Badrinath Ki Dulhania, which will serve as the second installment of a franchise that began with Humpty Sharma Ki Dulhania.[47] In addition, she has committed to star with Ranbir Kapoor in Ayan Mukerji's untitled fantasy film about a man with superpowers.[48]

Bhatt has performed playback singing for the song "Sooha Saaha" in Highway (2014). A. R. Rahman, the composer of the film, invited her to his music school to undergo training.[49] In 2014, she sang the unplugged version of the song "Samjhawan", for the composers Sharib-Toshi, in Humpty Sharma Ki Dulhania.[50] In 2016, she sang an alternate version of the song "Ikk Kudi", for the soundtrack of Udta Punjab, with her co-star Dosanjh.[51]

In addition to acting in films, Bhatt has performed at the Filmfare, Screen and Stardust award ceremonies, and has also participated in a stage show in Hong Kong alongside Varun Dhawan and Sidharth Malhotra.[52] In 2013, she performed at a charity event with Dhawan, Malhotra, Aditya Roy Kapur, Shraddha Kapoor and Huma Qureshi to raise funds for the flood-affected victims of Uttarakhand.[53] In August 2016, she performed in various cities of the USA as a part of the "Dream Team 2016" tour, also featuring fellow actors Dhawan, Malhotra, Kapur, Katrina Kaif, and Parineeti Chopra, as well as filmmaker Karan Johar and rapper Badshah.[54]

She also took part in a campaign for PETA to raise awareness about homeless animals.[55] She also launched her own line of clothing for women in association with the online fashion portal Jabong.com; she described the collection to be "very simple" and "very me".[56] She is also the celebrity endorser for a number of brands and products, including Coca-Cola, Garnier and Maybelline.[57][58]